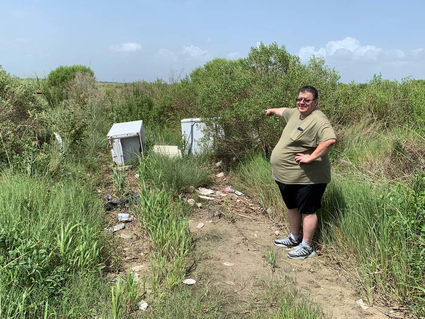 The Rainbow Bridge sparkles in the distance as Joe Henry's flag-bedecked pickup truck is parked near a fishing spot on Bailey Road Tuesday afternoon.

Linsey Williamson is a new mother who hopes to let her child learn the joys of fishing in the marsh below the Rainbow Bridge, like she did.

"I want my child to be able to be with me out here, but then you come down and see all the broken glass and fishing hooks everywhere.

"It's our little hidden gem in Bridge City. For the people who live here to come out and trash it like they do ..."

Native Americans fished the waters hundreds of years ago and longtime Bridge City residents tell stories of all the artifacts they found.

For more than 100 years, on a 2.5-mile road that appears on various maps under three names – Lake Street, Old Ferry Road and Bailey Road -- the area has been a recreation area for Orange Countians.

Bailey's Fish Camp was a home to both trappers and fishermen in the first half of the 20th century. Members of the Bailey family operated a restaurant, gas station, liquor store and dance hall on the road.

The ferry boat and landing, which, was the only way across the Neches River to Port Arthur before the Rainbow Bridge opened in 1938, was located along the road.

Most refer to the area as "Bailey's." It is part of the Lower Neches River Wildlife Management Area.

"We want to make the area real nice again, but it's going to take time to do it and we need help doing it," said Joe Henry, who has teamed up with Williamson and others for an effort they're calling "Let's Make Bailey's Great Again."

There's a Facebook page under that name and the first group effort will be a pair of trash-off events from 9 a.m. to 11 a.m. July 11 and July 25.

He's aiming for anywhere from 30 to 50 people showing up to help each of those days.

"We hope to go from the entrance to the old ferry landing the first day, and from there to the end of the road, where the trash is 10 times worse, the next time," Henry said.

The organizers are signing up sponsors and volunteers. They've already lined up a meal plan.

Williamson said she's reaching out to local Scouts and Henry said he was getting a good response from flyers posted at three high-volume establishments.

Until those establishments – all bars – were shut down last week, again, by the state's Covid-19 social distancing rules. 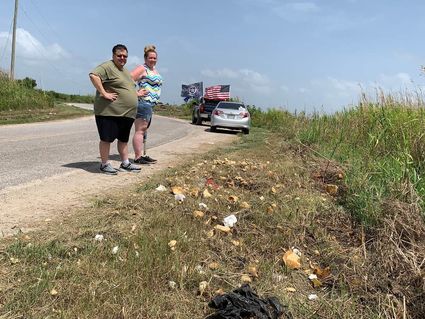 "Bridge City is taking all the trash we pick up, and if they get full, the county will take it," Henry said. "Orange County is providing a truck and trailer."

Rutledge has plans for improvements as well.

Five small handicap accessible family-size fishing piers have been built on one end of the road.

"I want to put three to five more on that long stretch and make it look good," Henry said.

"The mayor wants to put a boat ramp out here, make this a place where everyone can come, make it look like it used to," he said.

His dreams include some lights and more trash cans, which Henry pledges to empty every day.

The group is looking for Bridge City business owners to pay $40 each to sponsor one of eight signs bearing the messages "Do Not Litter" and "Slow Down-Families at Play" he plans to erect.