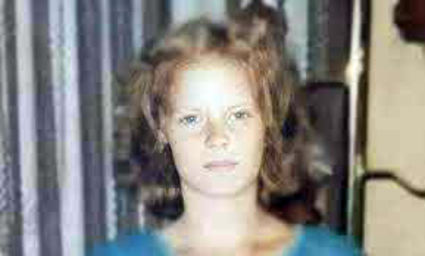 Almost every little girl wants to be known as a princess, but for 30 years Julie Gwenn Davis, was actually known as "Princess Blue" since her real identity was unknown.

The discovery of Julie's remains began when a man was headed home after a long day at work in Brazoria County near the city of Manvel on Sept. 10, 1990. Along the way he needed to relieve himself and searched for a place to quickly do it. He decided a dead end road, which was sparsely populated, was the best choice. He pulled onto Highway 288 and parked near a barricade. He noticed a pile of debris and a human skull resting inside the rim of a tire. The man went home and informed his wife of what he had found and the pair called local law enforcement.

Investigators at the scene found about 60 percent of her bones. But, missing were any traces of hair, clothes or any other source of identification. Given the condition of the bones, it is believed the body was there at least six months to a year.

Brazoria County did not have a medical examiner so the case was forwarded to Harris County. The autopsy revealed an upper left front tooth had been surgically removed. Also revealed were two fractured ribs and a tumor under her left knee. The medical examiner also reported there were no opiates found in her bone marrow. He believed the victim to have died due to foul play although he was unable to determine the manner of death. What would lead the case in a different direction was he concluded she was Hispanic, between the ages of 15-19 and her height was 4'8" to 5'2" tall. Later a forensic artist would say because of her facial structure she was of African American descent.

Found along with the bones were various pieces of jewelry. These included a silver scroll ring, a gold ring with six clear stones, a pearl banded bracelet, a silver ring with a turquoise stone horse and a 1975 Robert E. Lee High School class ring with a blue stone.

According to Detective Sgt. Anthony Meshell, of the Manvel Police Department, DNA testing at the time was not available and without knowing her identity they named her Princess Blue because of the blue stones in the rings.

The case went unsolved. Time moved forward and Julie's family still wondering what had become of her. The location where the remains were discovered is no longer desolate but is now a four lane highway. There is also several businesses including a pharmacy and day care center.

Two years ago, Meshell obtained her case file and took a closer look at it. Originally, the jewelry was only noted without much detail. He began by checking into information about the high school ring and found the school in Houston. Alumni was interviewed, but nobody recognized her. This lead to another dead end. It was later determined the ring was probably a gift since Julie would have been too young to graduate in 1975.

Technology evolved and as part of the investigation Meshell obtained the DNA from the remains. In addition, local media was contacted in order to generate new leads.

But, it would be a little longer before this case would show any promise and not in the way they thought it would.

About seven months ago Texas Rangers were conducting an investigation on a case they had named "Corona Girl." This too was a 30 year old cold case of remains found in 1989 of an unidentified female. She was named the Corona Girl because of a Corona Beer T-Shirt she was wearing at the time of her death. The Corona Girl's body was found in Jarell located in Williamson County. They asked Danny to submit his DNA to see if he was a match. It was determined he was not and the remains were later identified as Sue Ann Huskey.

However, the DNA did match another cold case, Princess Blue. This was not the outcome the siblings expected. In addition, this answer only lead to more questions.

Julie Davis was the oldest child of six children and born October 21, 1968. Her family refers to her as a "free spirit." She had wavy strawberry blonde hair and sparkling green eyes.Her pale skin was sprinkled with freckles. She had a petite build, but stood about 5-feet 9-inches tall.

Julie is described by her siblings as "kind-hearted", "gentle" and somebody who "loved to laugh." Julie also gave fabulous hugs. She had a tattoo she was very proud of on her forearm of a Libra astrological sign. The pearl bracelet given to her by her mother was a valued keepsake to her and found among her remains.

The busy family lived a nomadic life and lived in various housing in the Gilmer Homes and Riverside Addition when they lived in Orange.

The children attended area elementary schools such as Cove, Anderson, and Curtis. Times were tough as the parents, Danny Davis who worked as pipefitter/welder with the Local Union 195 and his wife, Edna Ray worked at a nursing home as a nurse's aide.

Julie began leaving home around the age of 12 and traveling between Houston and Orange, but would mostly frequent New Orleans.

The siblings remember good times too. Especially camping as a family at Cow Creek. These memories bring smiles to their faces as they reminisce.

Julie came in and out of their lives over the years. During one of her visits she suddenly arrived at the Jack Tar Hotel to see her family who was staying there. She was with a tall man with dark hair and dark colored full beard.

"He was kind of stand offish," Danny Davis said of the stranger.

Julie told her family the man was her husband. But, detectives have been unable to find a marriage license. It is believed to have been possibly a "common law" marriage, according to Meshell.

This would be the last time they would ever see her. But, this visit would leave a lasting impression on Danny Davis who was 17 years old at the time. Before she left, she hugged him tight and told him she loved him. She broke down in tears as she started to walk away.

Within the next three years, her remains would be discovered. The exact date is difficult to pinpoint, but investigators believe Julie was 18 to 21 years old at the time of her death.

"Over the years I have wondered where she was and if she was still walking this Earth," Danny Davis said. "She had gone before, but always came back home."

Her family believes the mistaken identity and lack of correct information has stalled the case over the years. They are saddened to realize their parents died in 1993 without getting the chance to learn what became of their little girl.

"It always felt like big hole," Shelly Davis said of her big sister being gone."I always wondered what it would be like just to pick up the phone and talk to her and let our kids play together. "

However, they are grateful to finally know where she is located. The family is hoping her remains will be released soon so Julie can be buried by their mother.

"We are still working this case as a homicide," Meshell said. "We are following up on all leads."

Anyone with information on this case is asked to call local law enforcement or the Manvel Police Department at 281-489-1212.