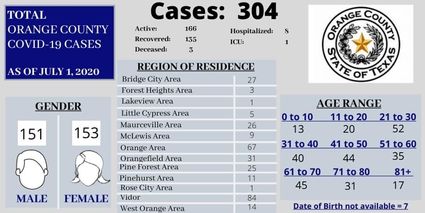 More than 100 new test-confirmed cases of the Covid-19 respiratory virus have been reported in Orange County in the last week, according to a Wednesday, July 1 report.

An even bigger jump comes in the number of active cases in Orange County, rising from just 12 on May 28 to 166 on the July 1 report. That is an increase of nearly 600 percent in the period since the Memorial Day weekend.

Incredibly, only three Orange County deaths have been blamed on Covid-19, a fatality percentage of less than 1 percent. 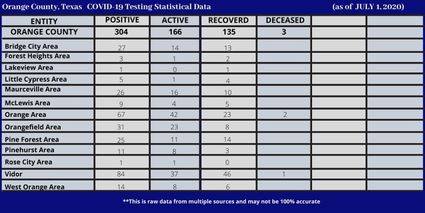 Geographically, the July 1 chart shows Vidor has the highest total cases, 84; and the second-highest number of active cases, 37. The "Orange area" is credited with 67 confirmed cases since March and is No. 2 for currently active cases with 37.

The statistics have been pretty similar based on gender. The July 1 report showed 153 positive Covid-19 test results were from women, with 151 from men.