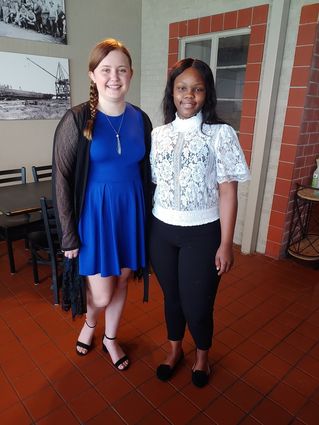 The Orange Chapter of American Association of University Women (AAUW) honored its 2020 scholarship honorees at a small luncheon on Wednesday, July 1, in the meeting room at Old Orange Cafe.  From left, are Darby Watson of Little Cypress-Mauriceville High School (LCMHS), and Shamyia Scott of West Orange-Stark High School (WOSHS), both awarded a $1,000 scholarship each.

Each year, AAUW gives an outstanding  female senior from LCMHS, as well as from WOSHS, the special academic award. The numerous applications are reviewed by AAUW Scholarship Co-Chairs, Joan Sechler Tharp and Carolyn Hillsten.

Watson plans to attend Sam Houston State University in Huntsville to major in Music Therapy, while Scott is choosing to enroll in Texas State University in San Marcos, majoring in Kinesiology and Athletic Training. Watson is the daughter of William and Jennifer Watson.  Darby served as Drum Major of the LCMHS Marching Band, Band Librarian, and Horn Section Leader, while ranked 12 out of 231 students and earning 27 college credits through Lamar State College-Orange (LSCO).

Scott was recently chosen Miss West Orange-Stark by the school faculty, and she served as Head Athletic Trainer, Student Council Chairperson. and vice president of the National Honor Society.

AAUW is a non-profit organization whose main philanthropy is the two above scholarships each year.  Their major fundraiser is annually at The Art in the Park, selling used books on the porch of the Lutcher Theater.  This year's Art in the Park is set for the first Saturday in October.

AAUW also provides books for The North Early Learning Center and participates with the Friends of the Orange Library and the City of Orange Public Library in the Library Family of the Year Program.