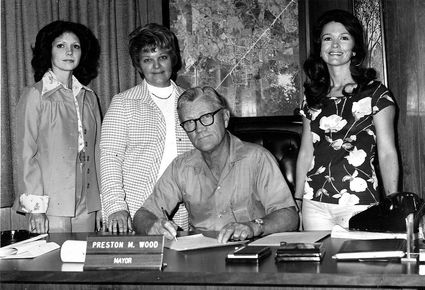 Caught in the crossfire of annexation, a community-conscious group of citizens in 1970 initiated a movement to incorporate the town of Bridge City. July 7 marks the 50th anniversary of their success.

By the late 1960s, the town of Bridge City's young infrastructure had taken root. In a healthy economic environment the thriving community boasted a Class 3A State Football Championship, a Chamber of Commerce, a Little League, a hometown newspaper and about 6,000 inhabitants.

Port Arthur and Orange became embroiled in legal squabbles that centered primarily over tax revenue generated by the Gulf States Utilities power plant located near the town. The two municipalities made conflicting land claims. In 1959 Port Arthur claimed territory on the eastern shore of the Neches River in Orange County strategically taking in the Gulf States plant. The following year Orange planned annexation beyond the mouth of the Sabine River including the inlet of Cow Bayou and land as far as north Sabine Lake to benefit from future industrial development.

The small town of Bridge City and its adjoining marsh lands were caught in the middle. Through Texas extraterritorial law, Port Arthur and Orange both made demands on Gulf States Utilities Company for uncollected tax revenue through the Annexation Act of 1963.

Annexation of the town seemed inevitable until a group of citizens from the Bridge City community decided to take a stand. They called themselves the "Citizens For Bridge City Incorporation 1970" and they weren't without opposition. Two earlier attempts for incorporation had failed. The 1970 citizens committee, however, foresaw the power struggle unfolding and mobilized to take action to prevent further annexation by one or both of the larger municipalities, and in the process propose incorporation to the Bridge City citizenry.

"We had a good group of civic-minded people and businesses that wanted to incorporate Bridge City," said C.W. "Bubba" Hubbard before his death in 2005. Hubbard had been a central figure in the citizen committee's 1970 initiative.

Hubbard and his wife Wilda had arrived in Bridge City in 1952. He established Hubbard Electric Company and was a member of the earlier failed attempts at incorporation.

In 1970, however, Hubbard said that annexation of Bridge City by Port Arthur or Orange had become a real concern. He and Albert Gore, a BCISD administrator, would co-chair the 1970 citizens group that included community leaders from a spectrum of business and civic organizations. The official members included John Brooks, Gus Garza, Curtis Lee, Donald Cole, L.J. Garriga, Charles Gorman, G.A. Laughlin, L.J. Bison, and Tom Arnold. Marjorie Fields served as the group's secretary. There were 14 in all. Twenty-seven year old attorney H.D. Pate was also on the committee. He and Feagin Windam, an Orange attorney, provided legal direction as Port Arthur and Orange ratcheted up claims on extraterritorial jurisdiction. To finance the initiative, the citizens committee collected $1,520 from among its membership and local businesses.

Going into action, the groundwork began being laid for the acclaimed "C.W. Hubbard and Others" lawsuit filed by Pate and Windham. The intention of the lawsuit was to stall annexation and inevitably force another election for incorporation.

Legal disputes, however, were flaring on all sides. Because of the claims Port Arthur made on the Gulf States Utilities power station, Gulf States refused to pay any further taxes to the City of Orange. Orange moved to block Port Arthur's claims in Orange County and the Bridge City citizens group launched the "C.W. Hubbard and Others" lawsuit against both municipalities.

"The lawsuit sought clarification of the law on extraterritorial jurisdiction," Pate, Bridge City's City Attorney for 34 years, "said before his 2019 death. "We wanted to know where we stood in a move to incorporate Bridge City."

Essentially, the "C.W. Hubbard and Others" lawsuit challenged the cities of Orange and Port Arthur for their claims on the area and invoked the right for the citizens to hold an election for incorporation. The lawsuit caused a landlock that halted further legal action by the larger municipalities. They released Bridge City from their territorial claims but not without first settling with each other over the Gulf States squabble. The citizen's committee dropped its lawsuit. It was a victory but a battle only half-won.

Convincing the citizens to return to the polls once again to vote for incorporation was the next obstacle. The citizens committee formed an Election and Promotional Committee headed by Gorman and Garza. Marjorie Fields chaired the Publicity Committee. Pate researched types of city governments. Hebert, Cole and Brooks searched for potential sources of revenue. Cost of operating a city government was looked into by Lee and Garza. The committee, under Hubbard and Gore, met weekly to monitor the group's progress.

"The procedure back then was that you needed at least 50 people to petition the Orange County Judge to hold an Election for Incorporation," recalled Pate. The citizens committee began a signature drive to get the issue on a ballot. Nine full pages of signatures accompanied the group's Application For Election to Incorporate. One hundred and sixty signatures graced its pages. The fourth item of the undersigned stated, "the desire to have the City of Bridge City incorporate . . ."

On July 5, 1970 permission for the election was granted.

Opposition to the proposal mounted. "There was a lot of people who thought Orange or Port Arthur would never touch the area we now know as Bridge City. They openly opposed incorporation," Pate said.

Nevertheless, the Citizens For Bridge City Incorporation produced "An Open Letter to the People of Bridge City" and it was published on the front page of the Penny Record. A promotional campaign titled "Did You Know" was circulated and bumper stickers were printed. The Jayceettes joined the effort with a "Get Out The Vote" telephone campaign. Countless volunteers talked up the issue to family and friends.

Finally, "For" or "Against" were the only choices left for the citizens of the town. The citizens committee named Nolton Brown as election judge as the decision went to the voters on July 7. On this day 1,123 votes where casts and the "Fors" took it with 677 of them. County Clerk Sallie Frazier deemed the election results official. The Penny Record spread the good news.

The Order Declaring Results of Incorporation made it a matter of history. The Order stated, "Be it remembered that on the 13th day of July, 1970 there came to be considered the returns of an election held on the 7th day of July . . . and it is hereby declared to be incorporated as a city, and that name of the city is and shall be the City of Bridge City." An infantile "General Law" municipality was born.

The day after claiming victory, Wednesday, July 8, the Citizens For Bridge City Incorporation 1970 held its final meeting. "There being no further business, and the function of the committee having been fulfilled, upon a motion made by Hebert and seconded by Gorman," the minutes read, "the members voted unanimously to disband." 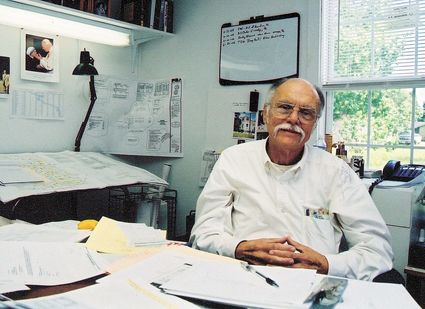 "We had a good group of civic-minded people and businesses that wanted to incorporate Bridge City," said C.W. "Bubba" Hubbard before his death in 2005. Hubbard had been a central figure in the citizen committee's 1970 initiative. RECORD PHOTO: Mark Dunn

On Oct. 5, Bridge City's first city council took the oath of office in a ceremony held at the Bridge City Volunteer Fire Department in a cinder block building at the corner of Bland and Roberts. The first city council voted to open each meeting with a prayer. They also voted to thank the fire department for the use of the building. H.D. Pate was hired to be the city's first full-time employee as City Attorney, a position he held until 2004.

Three years into its inception the city of Bridge City was asked to make another important decision. In 1973 voters elected to accept a "Home Rule" city charter that provided for a City Manager.

For his involvement as a leader in the Citizens For Incorporation 1970, C.W. "Bubba" Hubbard became the Bridge City Chamber of Commerce first "Citizen of the Year" in 1971. H.D. Pate was chamber president.