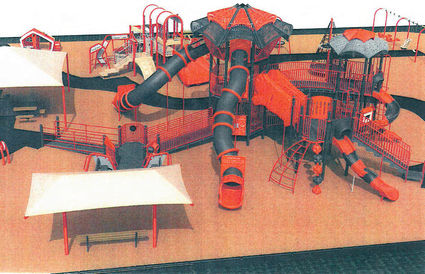 Orange City Council voted Tuesday to spend $489,000 for the purchase and installation of a new playground at Lions Den Park.

The old wooden playground, a community project built in 1999 with donated materials and volunteer labor, was declared unsafe in February and torn down in June.

City fathers hope the new playground will be completed by the start of 2021.

A Playhouse, Silly Tree and Sensory Garden Wall are other features. A swing will include seat belts, and four built-in shades, the largest 20 feet by 20 feet.

Ten concrete footings will support the shade structures and climbers. The layout will include 2,000 square feet of No Fault rubber surfacing covering a 652 linear foot shoulder to support wheelchairs.

The city also awarded a contract of $63,000 to A-1 American Fencing to surround the new Riverside Pavilion near the Orange Boat Ramp.

Orange County set aside $100,000 in hotel occupancy tax funds to make this purchase to protect the Pavilion, which will be used for both city and county events.

Additionally, the council members voted to spend $256,000 of money from last year’s $8 million bond sale to build a restroom to be constructed near the Pavilion.

It will include both men’s and women’s bathrooms.

The money had been previously earmarked for “Streetscape” which had been planned for a “Welcome to Orange” gateway at the intersection of I-10 and 16th Street.

Widening of the highway and rebuilding the overpass means work on the gateway is about three years away.

“Understand we’re not getting rid of the 16th Street streetscape,” Mayor Larry Spears, Jr., said. “We’re going to use this money now with the opportunity to use money out of the general fund on 16th Street when the highway construction is finished.”

Council also approved hiring Architects, Inc. of Bridge City to put together architectural plans for a new recreation center at the site of the old City Natatorium.