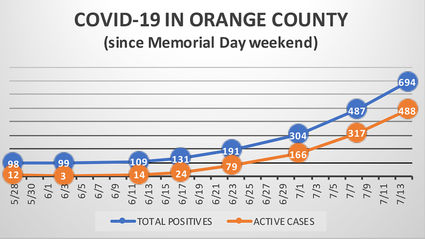 Joel Ardoin, the county’s emergency management coordinator, reported Tuesday to county commissioners that as of Monday night, July 13, Orange County had totaled 694 positive tests for the respiratory virus that has so far killed 136,000 Americans.

And now 7 of those deaths attributed to the new coronavirus are from Orange County.

Since Memorial Day, the number of active cases in Texas’ most southeastern county has grown from 12 to 488. That’s an increase of 3,966 percent in seven weeks.

Just since the previous report, July 8, the county has seen an increase of 207 positive tests, 171 active cases and two deaths.

That’s an increase of 53.9 percent in active cases since last week.

“A month ago, if you’d have asked me if I personally knew someone with COVID, I’d have said no,” County Judge John Gothia said Tuesday. “Now, I could probably list 25.”

Gothia tested positive – twice – at the end of June. While he was making his first public appearance since then on Tuesday, Commissioner Johnny Trahan was missing his second meeting after testing positive not long after Gothia.

For the first time since the pandemic reached Texas in March, every one of the 15 or so socially distanced people in court chambers for the meeting wore a face mask. In the previous dozen or so meetings since social distancing became a thing, media members were often the only ones wearing masks in meetings.

Gov. Greg Abbott ordered face masks inside businesses and government buildings last week and President Donald Trump has worn a mask in public for the first time this week.

“Wear masks, until further notice,” was the message from Dr. Calvin Parker, Orange County health director, in a Monday interview.

“We don’t know a lot of things, but we do know that wearing masks reduces transmission to some degree,” he said. “Until we see the curve start to go down, until we see a decrease in the disease, see it go away, we have to keep going with social distancing and wearing masks.”

Gothia was asked how many more county residents would test positive for COVID-19 before the end of the worst loss of U.S. lives since World War II.

“The one thing that we know is that number is going to continue to go up when we’re testing more people,” he said. “And we don’t know how many people are getting multiple tests. I’ve had four, and they counted all of them.”

Gothia said he received blood antigen tests for COVID in late May and when he began feeling ill in late June. Both came back negative. He said he had a nasal swab test and when results didn’t come back in a timely fashion, repeated the test.

The day after his fourth test came back positive, he got the same results for test No. 3, he said.

Abbott has stressed for weeks that the most important statistic about COVID-19 is the “positivity,” meaning the percent of positive tests divided by the total number of tests.

Orange County officials – Gothia, Parker and Ardoin – say they can’t get a count on the total number of tests conducted because private clinics and doctors’offices that are doing a lot of testing are only required by the state to report positives to the counties.

The large testing sites set up by the state’s military medical command and its replacement, a private contractor called Honu, do not report to counties on the total number of positive tests from one of the one-day events because they are open to anybody, not just those from a particular county, as was the case early on.

More free tests will be performed from 8 a.m. to 4 p.m. both Wednesday and Thursday, July 15-16, at the Orange County Convention and Expo Center, 11475 FM 1442 in Orange. No pre-registration is required.

“It’s hard to judge statistics,” Parker said. “You can be positive for COVID and sick with something else. You can have it [COVID] without symptoms. I’ve seen numerous cases like Judge Gothia’s. He tested negative two times, then the third test was positive.

“I do this every day and this is something we’ve never seen. We’re in new territory, not sure what to do with all this data. Your data is only as good as the information given to you.”

While major Texas cities like Houston and Dallas are among the country’s top hotspots, much has been made of hospital beds filling up in Jefferson County’s three hospitals.

They are also the most likely landing spot for people from Orange County, which has no hospital beds.

Ardoin said while beds are plentiful, the intensive care units that some COVID patients require are in short supply.

“Jefferson County hospitals have 775 general beds and their surge capacity is 930 beds. As of Monday, only 337 of those beds were being used, and out of that number there are 117 being used by COVID patients,” Ardoin said.

If there is any good news in the stats, it’s that the virus is not as deadly as it was in its first months in Texas.

In Orange County, the second COVID-caused death was reported May 1, making the ratio of deaths to cases 1 for every 38 positives. Ardoin’s report listed 7 deaths out of 694 positives, about 1 death for every 100 positives.

“We’re definitely seeing that the death toll is decreasing compared to the number of active tests,” Gothia said. “The medical community is using different options available to them than at first.

“We haven’t seen it yet, but I was on the phone this morning with some other county judges who say their doctors are getting self-test kits. The doctors give to the patient, who then conducts his own test and sends the results off to a lab to be checked.

“That will make the number [of negative tests] even more hard to track.”