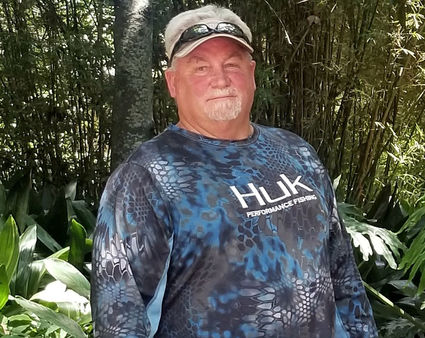 Butch Campbell is enjoying his retirement after his 44 years of service to Lamar State College Orange wrapped up at the end of June. After starting as a phys ed teacher, Campbell was the college's director of student activities for a most of a career that ended with him as director of security.

But he got there as soon as he could.

The Orange native got to what is now known as Lamar State College Orange in 1975 and the impact he's made on both the college and his hometown has been immeasurable.

Campbell, 65, retired after 44 years working at LSCO two weeks ago. The college is 51 years old.

He sounds like he'll really miss it. But not as much as he'll be missed.

"Butch was the epitome of a servant leader," Melanie Ledoux Toups, Bridge City Elementary School principal and part-time instructor at LSCO from 1986-93, said on the college's Facebook page. "His huge heart for others caused each person he came in contact with to feel special.

"I was fortunate to see first-hand what an advocate he was for students."

Bill Bradberry wrote: "There are hundreds of folks Butch Campbell has helped over the years. And thousands that will never know that he was their answered prayer."

"Butch was instrumental in helping me get back into school after a 10-year hiatus," Hall wrote. "He hired me part-time to work in the student center and he probably doesn't know how much his assistance helped me."

Campbell's first LSCO job came when he was still a year and a half or so from earning his bachelor's degree in physical education at Lamar University, Beaumont. He was hired to be the PE coach at Lamar University, Orange, becoming the school's 13th faculty member. But he really enjoyed his days as student activities director.

"I have no idea how many thousands of students came through there," Campbell said, "but I really got to know a bunch of them. They'd come back and visit, or I'd see them around town.

"Every one of them made an impact on me."

Named Jesse Campbell Jr. after his father, a longtime supervisor at DuPont, Butch was a 1973 graduate of West Orange High School Class of 1973. Campbell played football at Northwestern State University in Louisiana for a couple of years before what he described as "some ugly injuries," led him back to Texas to finish his college degree.

"I had decided at that point I wanted to be a coach, so I started taking PE classes as soon as I could," Campbell said. "Dr. [Pete] Yates was my adviser in Beaumont and he told me to check in at Lamar-Orange because they didn't have a PE teacher.

"The president in Orange then, Joe Ben [Welch], told me to go pick up some keys; I was teaching that afternoon. There was no interview."

The Orange campus had only one building then and Campbell's classes met at the gym at the Orange Navy base, about where the Orange Boat Ramp is now. Bob Frank, former head football coach for West Orange's Chiefs, was teaching PE at LSCO before Campbell.

"They hired me because he [Frank] wanted to go back to coaching full-time. He gave me one volleyball that wouldn't hold air."

Campbell got more volleyballs and added more programs. He added weightlifting, canoeing, aerobics and a little bit of health and wellness to old standards like basketball and volleyball. He even started a water skiing team.

"I built the program up from one class to where we had about seven offerings," Campbell said.

In 1986, Campbell became student activities director. He finished up as Director of Security for LSCO and its Title IX compliance officer.

"We brought in a lot of cool people, some tremendous entertainers and great lecturers, people they might not get to see anywhere else.

"It was a lot of fun, but it did keep me on my toes. Students will throw a lot of stuff at you, but I was the students' advocate. That's how I spent most of my time, being sure we did everything we could for them to be successful on campus."

"They're two of the finest people I've ever known. I learned so much from both of those guys. They were amazing. And there were two vice presidents that I worked for that probably gave me more leeway than anybody else , Mike  Yeater and Bobbie Burgess, was with me 15-20 years.

"I always had people who were friends that I got to work with."

Campbell and his lady, Linda, plan to do a lot of traveling, which began as soon as he handed in his keys. But they'll continue to live in Orange and keep close to their four children.

And, if he's not traveling, Butch will be out helping someone.

He twice won the Julie and Ben Community Service Award while working at LSCO. He's a life member of the Orange Lions Club, was honored as Orange's Citizen of the Year in 2017 and has helped with Cops and Kids for more than 20 years. He's a leader of the Back to School Orange program and board member and volunteer to countless organizations.

"Besides all that service at LSCO, he has always lent that helping hand to community projects," County Commissioner Johnny Trahan said. "Butch has always been there when called upon."