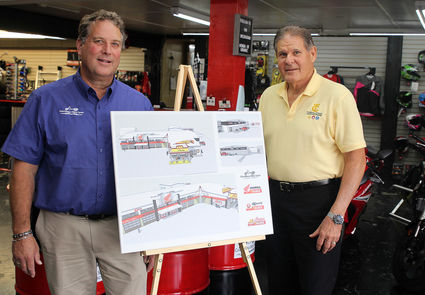 Mark Frey, left, and Ed Van Huis, look over the drawings for their new Columbanus Motor Sports, which will sell Indian motorcycles, along with Hondas, ATVs and lawnmowers when it opens next March.

For more than 50 years, his family business has been busy improving the looks of local properties.

But Mark Frey of Orange is joining with Ed Van Huis, the owner and founder of industrial manufacturer Tubal-Cain Industries, to send folks off on the road to new horizons.

Their Columbanus Motor Sports, located at 3500 Interstate 10, is set to open as the new Southeast Texas dealership for Indian Motorcycles next spring.

The company is named after St. Columbanus, a sixth century monk who is known as the patron saint of motorcyclists after a life of traveling across Europe.

Indian Motorcycle, founded in 1901, was America's first motorcycle. Soon after, it became the largest motorcycle manufacturer in the world.

"It's a lifestyle bike," Van Huis said. "I like being different, not just another Harley-Davidson rider."

The Indian Motorcycle company went bankrupt in 1953, but is having a resurgence since being purchased and brought back by Polaris a decade ago.

"I wanted to bring Indian Motorcycles here, because it was being dropped by Cowboy Motorsports [Beaumont's Harley-Davidson dealer]," said Frey, best known around town as the owner of Frey's Landscape.

Van Huis, a native of Chicago, has been in Southeast Texas for nearly four decades, after leaving the family machine shop business to start his own.

After starting Tubal-Cain to manufacture anchor bolts, he kept adding products and eventually bought his family's Chicago business and moved it to Texas. He started Tubal-Cain Marine Services in Orange in 2005 but outgrew his plant and moved that business to Port Arthur after a few years.

"I've always liked Indian Motorcycles, but my riding days are over," Van Huis said. "I just enjoy selling them.

The idea for the Indian Motorcycle dealership began a little over a year ago and led to the purchase of the Honda dealership as a first step last September.

"Last spring, March 3, 2019, Mark just popped me an email and said, "Would you ever consider getting into the motorcycle business. Within two or three minutes, he had my reply.

"Then Indian strongly suggested we have another brand."

The two entrepreneurs purchased the local Honda dealership from Clester Andrews, who had owned it since 1967, Frey said.

"Honda was the key. Honda is a stable brand with a good inventory," Frey said.

Frey turned over the day-to-day of the landscaping business to daughter Mallorie Henning.

Columbanus Motor Sports, the former Cummins truck sales and service center down Tejas Drive from the Free States Cellars winery, will also include the Honda dealership that is now located at 1800 Strickland Dr.

The new business also features a wide variety of ATVs as well as exMark lawn mowers sales and maintenance. Plans call for a café inside and rally pavilion,

"This new place will be about four and a half times bigger than this [Strickland Drive location]," Frey said. "We have a 2,500-square foot showroom here. We'll have about 21,000 square feet of showroom there, and about four times the total floor space."

Frey's landscaping business morphed out of his parents' -- Will and Katherine Frey -- Frey's Nursery and Garden Center, the change coming after Will Frey retired in 2000.

He employs about 40 local residents there and a dozen at the Honda dealership.

The new Indian Motorcycles dealership should employ at least 30 workers.

In addition to the new motorcycle dealership, Van Huis and Frey also have plans to open Green's Bluff RV Resort at 2214 Interstate 10 next spring.

It will have about 50 sites, employ about five and offer a spot for tourists. But the two entrepreneurs are saving the details of that undertaking for later.

"First and foremost is getting the dealership going," Frey said.