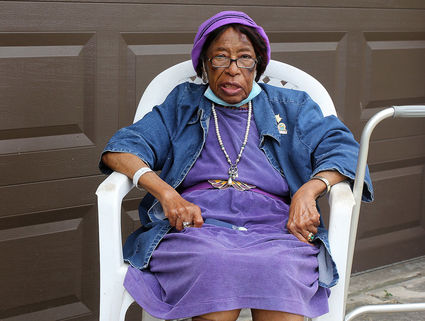 The memories are great in quantity and quality for 92-year-old Essie Bellfield and last weekend's death of civil rights legend John Lewis carried her back to "Bloody Sunday."

"They had billy clubs hitting us all over the head and everything," said Bellfield, who was Orange's first Black and first female mayor from 1997-2000.

Lewis, a Congressman who represented Atlanta, Georgia, in the U.S. House of Representatives for 43 years, was before that a contemporary of Rev. Martin Luther King, Jr.

He was beaten unconscious by an Alabama state trooper wielding a nightstick as he crossed the Edmund Pettus Bridge leaving Selma, Alabama, on March 7, 1965.

State troopers, flanked by horseback-mounted members of the sheriff's posse, wore gas masks and swung nightsticks as they attacked the peaceful marchers.

"They were spraying water [from firehoses] all over us," Bellfield said. "Mr. James A. Roberts from Orange, they knocked him down with a water hose."

Bellfield said she accompanied Roberts, Velma Jeter and Fred Early, all from Orange, to join 600 others in the March 1965 voting-rights march, which began in downtown Selma and ended in blood and gas clouds less than half a mile later.

Two weeks later, after a federal judge overturned an order by Alabama Gov. George Wallace declaring the march illegal, Lewis and MLK were accompanied by about 3,000 marchers when they finished the 54-mile march to the state capital in Montgomery.

Bellfield said she met Lewis several times on one of her trips to Washington, D.C., either with the NAACP or on behalf of the city of Orange or one of her other organizations.

"We'd get on the bus and ride to those marches," she said. "We marched and marched."

Bellfield's own upbringing was different than many who marched in those days. Born in Pittsburgh, Pennsylvania, and raised in Louisiana, her father was a lumberjack and her mother was housekeeper for owners of a rice mill.

"Those Boudreauxs were good people," she said.

Her family moved to Orange, where Bellfield's mother worked for some of the city's top families and Essie resided under those families' roofs.

The future mayor headed up the housekeeping department for Orange's hospital for years.

And she loves traveling.

"I've been all over the world except Russia," Bellfield said.

After her years as mayor, she rejoined city government as a council member before losing a re-election bid a couple of years ago.

Though she stays close to home these days, she hasn't stopped looking out for others.

"I'm for civil rights, man. I need people to go up there for jury duty when they call them," she said. "You have to do it."

And, from time to time, she looks back on the "olden days."

"Right now, I go back and look at the Pettus Bridge, and I say, 'Ya'll don't know what we did here.'"