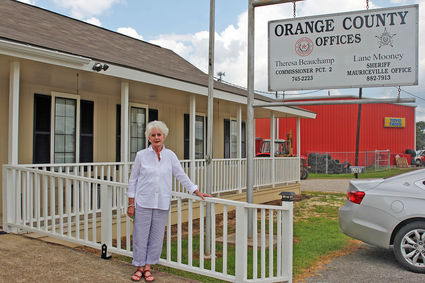 Theresa Beauchamp, Commissioner of Orange County Precinct 2, holds the keys to her newly rebuilt office and Sheriff's Office substation last Friday, After waiting on FEMA funds for two years after it was wrecked by Tropical Storm Harvey, County Commissioners voted to rebuilt the Mauriceville structure with insurance money. Beauchamp, who has been temporarily housed in the county's transportation office, says she will furnish the office with surplus furniture from the county warehouse.

Almost paradise. Who could ask for more?

But she seems too busy being tickled pink by the fact that her long-awaited office is almost ready to call home.

"I'm just so happy," Beauchamp said during a Friday show-and-tell of the nearly complete rebuild of the office on Highway 62 that also will serve as a Sheriff's Office substation.

It flooded during the country's wettest storm, Tropical Storm Harvey, in August of 2017.

"Barry Burton opened the door and closed it, then went and found other office space," Beauchamp said.

Burton was her predecessor as commissioner. She beat him by two votes in the March 2018 Republican primary election.

Since being sworn in Jan. 1, 2019, Beauchamp has had temporary quarters in the county transportation office on FM 1442.

"I've been sharing it with a mechanic," she said. "The room is so small, the best thing in it is a Snappy toolbox."

Precinct 2 is the county's biggest, in terms of area, extending north from the West Orange city limits to the county line, touching parts of Vidor to the west and all of the communities of McLewis and Mauriceville.

"I'm going to miss everyone out there," Beauchamp said of the folks at the transportation office. "They've been so kind.

"But I need to be here, in Mauriceville. Mauriceville is the largest part of my precinct. And this office is huge compared to that one."

Kurt Guidry, county maintenance director, said the biggest thing remaining to make a $138,000 repair of the 1,700-square-foot building complete is installation of internet.

The delay in making storm repairs was due, in part, to Burton accepting alternate housing for 16 months, and a desire to get FEMA to authorize a reimbursement of funds.

After two years of waiting on FEMA to issue rules, then rewrite them often, Orange County decided to do the repair with proceeds of its insurance policy.

"Dean Crooks wanted FEMA to pay, and that just slowed everything down," Beauchamp said, beginning to list all the county judges she has worked with in not quite two years on the job.

"Carl Thibodeaux said, 'You need an office. This is ridiculous.' And John Gothia followed through.

"It was all built with the insurance money from Harvey that covered the building and contents. There were no taxpayer funds used for this," the commissioner pointed out. 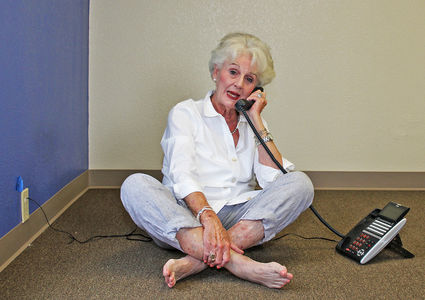 Orange County Precinct 2 Commissioner Theresa Beauchamp, elected to office in March 2018 and sworn in on Jan. 1, 2019, makes a phone call to a constituent in her soon-to-furnished new office on Highway 62 in Mauriceville. The Precinct 2 building, which will also host a Sheriff's Office substation, was destroyed in August 2017 by Tropical Storm Harvey.

Beauchamp says she's getting her furnishings from leftovers at the county warehouse.

While the flooring and interior Sheetrock and ceiling were ruined by moisture, Guidry said the bones of the building were intact. With a new roof, only some of the exterior walls required repair.

"The only thing they did outside was change some panels that were rotted," the maintenance bossman said.

Behind Beauchamp's spacious front office is a smaller office space that has in the past played host to State Rep. Dade Phelan's Orange County staff and a third room for filing cabinets.

The middle of the building is a wide lobby and the north end will house the Sheriff's substation. There's a small kitchen included in the back.

"The people out here are so happy," Beauchamp said, "and they're really looking forward to the deputies coming back.

"Right now, if they need help, if somebody's getting robbed at night, they'll have to wait 25 minutes. [When the substation opens] they'll be right here."