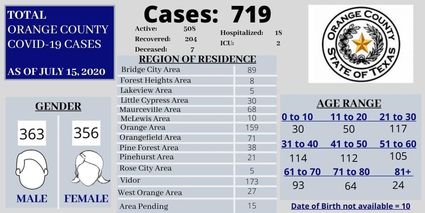 More than 1,000 people were tested for COVID-19 during three days of testing offered in Orange County last week.

Might the number of positive tests from Orange County also top 1,000 when the next official weekly information release comes later this week?

Based on the ever-climbing upward curve of recent weeks, it wouldn't be a big reach.

Active cases stood at 508, according to the July 15 report posted on the Facebook page for Orange County Emergency Management.

While it took three months for the county to reach 300 confirmed cases, the number more than doubled in two weeks – an increase of 136% since July 1.

"We knew those numbers were going to climb as we did more testing," County Judge John Gothia said.

Gothia and County Commissioner Johnny Trahan have just returned to work after testing positive for COVID-19 and having to quarantine for 14 days.

Gothia said about 20 county employees have tested positive for COVID-19 since the respiratory illness first surfaced in the county in March.

The county judge feels someone has some 'splaining to do about the reporting of test results. He's pretty sure that he's down as two cases since he has had four tests and two came back positive.

While the governor and others say the key to gauging the depth of the ongoing crisis is the percentage of tests that come back positive, Orange County continues to report no negative tests.

That means every Orange County result reported is a positive. And two for the county judge.

Which begs the question about negative test results. A requirement to be released from quarantine by health officials is two negative tests.

The average age group for those who have tested positive for COVID-19 in Orange County is in the middle, 41-50 group. But the weekly average has been in the 31-40 range two of the past four weeks.

The age group in the county with the highest number of positive tests is the 21-30, with 117 recorded as of July 15.

President Donald Trump wants all students to return to school campuses next month. The Texas Education Agency offered governance last week. Then redid that plan the next day. 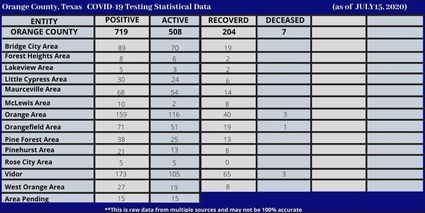 "The governor says counties can get exemptions [from returning to in-person classes] if the county health authorities approve a waiver," Gothia said.

"We want to make the best decision to keep students and teachers safe. And their families and grandparents safe, when the schools get back open.

"I think the rules will change again before we get there. Every week, things change."

The county has installed walk-through kiosks that check your temperature at both the main courthouse and the administration building that holds the tax office and the commissioners' courtroom.

Those kiosks will also ultimately function as metal detectors. This has resulted in access to the county courthouse being limited to the center door off the back parking lot.