By Capt. Dickie Colburn
For The Record 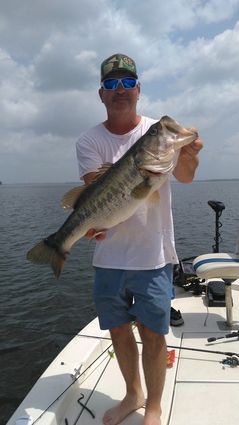 I can't imagine that we will see another 12.4-pound bass caught this

summer, but Toledo Bend did give up at least two more double digit fish

this past week.Both fish were caught in the afternoon hours.

found weapon."I won a little tournament back in March with a Norman DD22

crankbait and I am still fishing it most of the time.I can't stand

will catch them over a bare bottom."

He added that he fishes only two colors."A crawdad pattern was good when

it was colder, but I haven't fished anything but Sexy Shad all summer,"

added Duplantis."The best part of using this lure is that I don't have

to navigate the wooded creeks.I have fished the deep points on major

flats like Tennessee Bay all the way to McGee's and caught fish."

assessment of the Carolina rig."I don't get to fish a lot and I have

grass or brush helps, but I have a lot of confidence just dragging it

around while drifting open flats and deep tree lines."

pounds on both Toledo Bend and Rayburn the past three years, but was

beginning to think he would never break the ten pound mark."The only

easing her back in the water.Maybe I'll catch her again next year in the

he is closing the gap very quickly.A month ago he texted me a picture of

for learning to use quality electronics and that, in his opinion, only a

few areas consistently attract big bass."I have found that I can fish

over three pounds while another similar area continues to hold larger fish."

Bates said he has yet to figure out that part of the equation, but there

is no doubt that he is quickly shortening the learning curve.The same

pound mark.That would be a good start to a winning five fish limit in a

fishing pressure in the Matagorda area.Long waits at the launches and

boats constantly running around are the new norm.In spite of that, they

That has not been the case here on Sabine Lake.It gets a little crowded

south of the Causeway and along the north revetment wall on occasion,

but very few folks are even looking around in the main lake.

numerous, size has still been a problem. The catching has been a lot

more fun, but limiting on keeper size fish has been a challenge.

All of this could change, however, in the very near future.On the

positive side, we are starting to see larger schools of shad all over

On the negative side, we are now looking in the face of what has been an

the area and too much fresh water is a game changer.In fact, we have