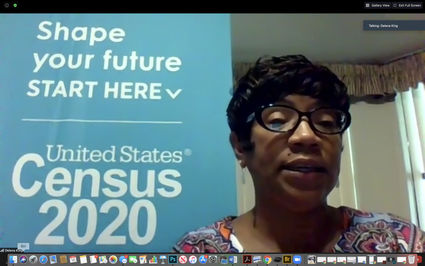 Dr. Delena King, the Census Bureau's senior partnership specialist for Southeast Texas,  is calling upon Orange County residents to return their questionnaires to create an accurate snapshot of the area.

Cutline: Dr. Delena King, the Census Bureau's senior partnership specialist for Southeast Texas,  is calling upon Orange County residents to return their questionnaires to create an accurate snapshot of the area.

Answer the door. Answer the questions. Do your part for Orange County.

The U.S. Census Bureau is sending mask-wearing people door-to-door to socially distance while helping fill in the blanks for those citizens who have so far not self-registered online or via mail.

The answers generated by the once every 10 years census are used by businesses to decide where to build factories, offices and stores. Local governments use the census for public safety and emergency preparedness.

"There's money and power in this," Dr. Albert Thigpen of Complete Count Port Arthur told a recent meeting of the Press Club of Southeast Texas. "This determines how many representatives we have in government.

Joining Thigpen in the presentation via Zoom was Dr. Delena King, the Census Bureau's senior partnership specialist for Southeast Texas.

Between now and the end of October, census takers – known in the biz as enumerators – will be making the rounds with their official lanyard IDs and blue and white "Census" bags.

In Orange County, only 51.7% of the residents have self-registered to be represented. The numbers are 57.5% for the state of Texas, 54.8% for Jefferson County.

"All over the country, people are trying to figure out how to get the response rate up," King said, mindful that the Covid-19 pandemic has delayed the census effort.

Thigpen mentioned that youngsters have been seriously undercounted in the past.

"In 2010, we lost five million kids under 10 because the parents did not list them," he said. "We want a complete head count of everybody."

The census is based on a snapshot from April 1, 2020. The residents will be asked how many people lived in their homes on that "Census Day" and details about them.

The census, a count of every living person in the United States, is required by the U.S. Constitution to be conducted every 10 years.

It is against the law for the Census Bureau to publicly release people's responses in any way that could identify them or their household.

Census Bureau information cannot be shared with anyone, not the police, not immigration officials.

"Census workers can be fined $250,000 for violating confidentiality," Thigpen said.

"By now, everybody should have been contacted, but because of Covid-19, we are sending out a sixth mailing to every house that hasn't responded," King said.

People can fill out and return those mailings.

Others wishing to eliminate the need for a door-to-door visit may do so by filling out the census questionnaire online at my2020census.gov.

The Census Bureau is joining up with Orange pastors.

The census tract including homes located south of Interstate 10 and between 16th St. and the Sabine River was one of the most under-reported in the 2010 census and is getting special attention this time around.

As of Monday night, Bridge City had the best census response of Orange County cities at 56.5%, followed by Pinehurst at 51.6% and Pine Forest at 51.3%.