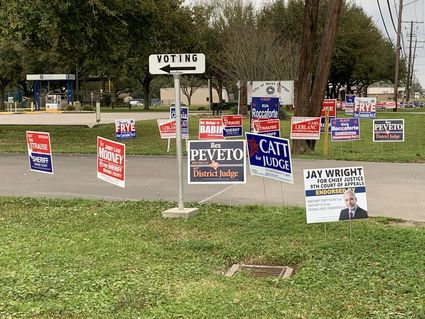 John Gothia was not one of two politicians running for office in Orange County this year to raise more than $30,000.

But he got close.

And the man who won the County Judge election with about 75% of the votes is the only one to have saved $21,000 of his campaign dollars.

Meanwhile, Rex Peveto, judge elect for the 163rd District Court, spent more than $60,000 to win a job that pays $158,000, almost never draws a re-election challenge and has an awesome retirement plan.

All this comes from campaign finance reports filed with the state and county July 15.

While the general election is not scheduled until November, those who ran in the March 3 Republican Primary have no Democratic opponents in November, so March 3 was their election.

So what's Gothia doing with all that green?

"Well, I will run some ads, but I can hold the money until my next election," he said.

"I'll hold it until I decide to run again and then I can use it on the next one."

Campaign funds are restricted in their usage.

Gothia's opponent in the primary was Vidor blueberry farmer Ernest Bayard, who reported no fund-raising and only $4,000 in expenses.

Gothia's primary expenses were for yard signs and a few newspaper ads.

Elected as County Commissioner in 2016, Gothia was appointed as County Judge on a fill-in basis last summer. His election to the job that pays $107,140 per year was for a two-year term that officially begins Jan. 1, 2021 to run through 2022.

"I could have raised more," he said, noting he didn't list any incoming funds in his final report. "I asked them to quit sending me money."

Peveto, the son of a former Texas legislator, spent more than $47,000 with DDM Marketing of Lumberton, a one-stop marketing firm that designed his advertising and displayed it on social media, billboards, television, radio and newspapers.

Peveto's July report showed $1,500 in contributions, a pair of checks from Orange attorneys written after the election.

Catt's final report shows he raised $8,750 in political contributions between Feb. 27, less than a week before the March 3 Republican Primary and March 24.

The money included eight $1,000 checks, six from Beaumont attorneys and law firms, and it pushed him to $33,839 in political contributions for the campaign.

Peveto, another Orange attorney, beat him in the battle for the open seat by a 59% to 41% margin.

Lane Mooney defeated Strause in a tightly contested election to replace a retiring Sheriff Keith Merritt. The winning margin was  52% to 48%.

Strause reported $15,773 in contributions on his first campaign filing in January and hit $30,186 overall with his Feb. 24 filing.

Strause's final report was late arriving and not included in this report.

Mooney showed $1,000 in contributions for the final period, bringing his campaign in at about $25,000.