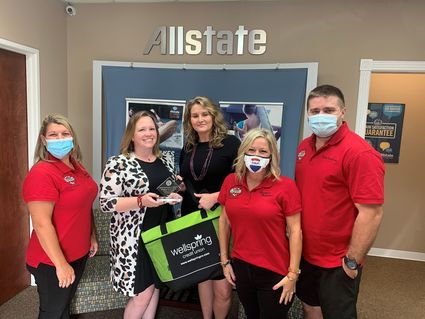 The Bridge City Chamber of Commerce is announced that Jonie Trahan at Brent Walters Allstate in Bridge City, has been named July Employee of the Month. Jonie was presented her award, sponsored by Energy Ford, by Chamber President Candace Mulhollan, Ambassadors Rani Dillow, Stephanie Roberts and Eric Andrus.

Jonie has been in the insurance business for over 15 years. She has returned to Brent Walters Agency in Bridge City three months ago. Elyse Thibodeaux of Tiger Rock Martial Arts nominated Jonie as Employee of the Month after working with her on some of her own business. Jonie is not only knowledgeable about insurance but a true pleasure to work with. Jonie would like to thank Elyse for nominating her for the award. She appreciates being noticed for her dedication to helping her customers. We would like to Congratulate Jonie for being recognized as an invaluable member at Brent Walters Agency in Bridge City.