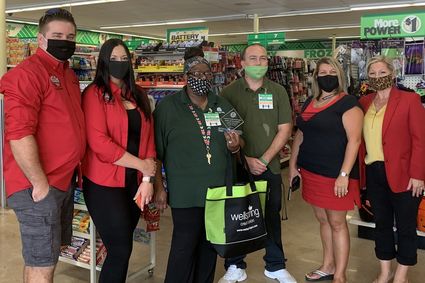 Tree, has been named April Employee of the Month. Paulette accepted her award from Ambassadors Rani

Paulette was nominated by Meagan Johnson. Meagan was shopping at the Dollar Tree and upon leaving

realized she left her wallet at the store. Not only did Paulette secure her wallet she also waited until after

hours until Meagan was able to return to the store to pick it up! Meagan was quoted “I’m so thankful she

waited when she didn’t have to. And I’m thankful for good, honest people who still turn in wallets.”

Month! Paulette is the manager of the Bridge City Dollar Store.