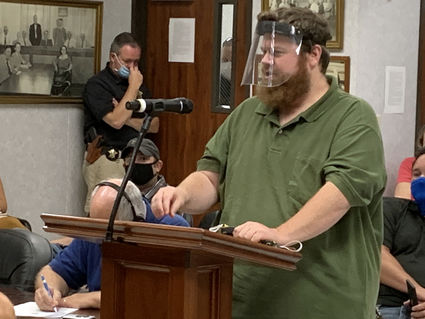 Dana Roberts of McLewis was one of eight residents to speak against a proposed tax rate hike for Orange County Tuesday afternoon. County Commissioners will finalize the rate next month.

Cutline: Dana Roberts of McLewis was one of eight residents to speak against a proposed tax rate hike for Orange County Tuesday afternoon. County Commissioners will finalize the rate next month.

It was show and tell at the Orange County Tax Rate hearing Tuesday afternoon.

Orange County Judge John Gothia showed a group of concerned taxpayers how he would spend the extra funds generated by a proposed tax rate increase of 4.5 cents per $100 value.

Then eight of the taxpayers told County Commissioners they didn't want a higher tax bill – certainly not now, during the economic crisis caused by the global coronavirus pandemic.

That is a change of the 2019 tax rate of 0.54200 per $100, which had been the same since 2017. The proposed rate only establishes the ceiling for the final tax rate. The county won't finalize the tax rate until September and could elect to stay at the old rate, or even lower it.

"Ya'll can get upset and vote me out of office, but my job is not to get myself re-elected; my job is to do what people want me to do," Gothia said.

He explained the higher rate would include funds to address citizen complaints.

About 15 people other than county employees and media members attended the meeting and half of them spoke.

But first Gothia listed four "major projects for our citizens that we'd like to do" and the estimated cost, in order of priority.

The first two would vastly improve drainage, he said: Changing driveway culverts on county roads at a cost of $1.2 million; replacing six railcar pipe culverts with bridges at a cost of $2 million.

The third would be $980,000 to replace 40-year-old equipment at the Road and Bridge Department; and the fourth would be $650,000 for a centralized voting system that would allow Orange Countians to vote on election days in any of 24 polling places like they can vote in any of the four early voting locations.

"If the public supports it, then we do it. If the public doesn't support it, that's fine, too," Gothia said. "All the improvements we want to see in the county, there's a cost associated with it."

But he questioned the timing.

"While we support your initiatives, we don't believe this is the best time to do it," he said.

"Because of the pandemic, you've got single parents who can't work because they're staying home with their children. And hundreds of businesses are struggling because they either can't open, or can't operate at 100 percent capacity.

"My urging to the county, on behalf of the Republican Party of Orange County, is: let's hold off a year. Wait until kids are back in school and people have the money."

Robert Sepulveda led off the taxpayers with a parable about bulls learning to live with less.

Wayne LaCombe Jr. of Little Cypress complained about his constantly rising tax bill and said house prices near him were being depressed.

"This tax increase has us second-guessing expanding our business in Orange County," he said. "Increasing taxes makes it almost impossible for small businesses to succeed."

Gothia and several commissioners pointed out during the hearing that while the county collects everyone's all-encompassing tax payments through the County Tax Assessor-Collector, that most of the overall tax bill includes taxes charged by other entities, and that money is transferred out to the other entities, including school districts, cities and the port district.

Money has historically been tight.

Covey, the fourth at the podium to speak, was followed to the podium by Donovan Weldon, II, of Orangefield.

Dana Roberts of McLewis asked if the county had considered taking out a loan to accomplish Gothia's wish list and established his preference for no new taxes.

"Anytime a government entity says 'I need to raise the tax rate,' it's saying, 'I have failed,'" he said.

"If you do good, the county grows and you get [higher values and] more money."

Gothia talked about the annual rise in the price of goods and services needed to keep the county offering equal service from year to year.

Carl LeBlanc of Bridge City, who lost to Roccaforte in March's Precinct 3 Commissioner race in the Republican primary, asked why the commissioners didn't let people vote on raising the tax rate to pay for the projects. 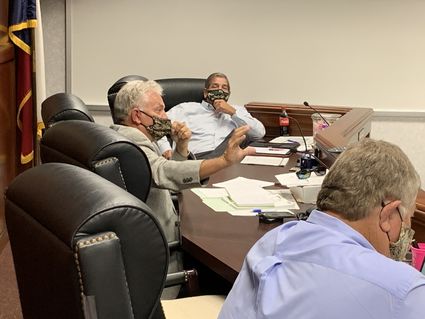 Orange County Judge John Gothia gestures as he makes a point as Commissioner Robert Viator looks on at Tuesday's Tax Rate hearing. Gothia said he is working on a 2021 budget that does not include any raise in the tax rate, but would push to raise the rate if citizens wanted to add new drainage and centralized voting computers into the budget.

Gothia explained an election would have been required if the county wanted to raise the tax rate above 0.61412, and they would have to find bigger projects to push the total that high.

Jan Wendt of North Orange also suggested an election to let the citizens vote on projects they wanted to raise tax rates for.

She also pointed out that fixing culverts wouldn't help until the bayous they flow into were dredged.

Wendt compared steadily rising taxes from cities, schools and the county to "death by a thousand cuts."

"I hate paying taxes," the judge said. "I also know to do the job people elected me to do, I need to provide services.

"I've got just as many people telling me to spend money today; they want the drainage fixed now.

"Political suicide right here. I don't care. We're all trying to do what's right for our county. I'm going to listen to what the citizens say, but I'm hearing it on both sides.