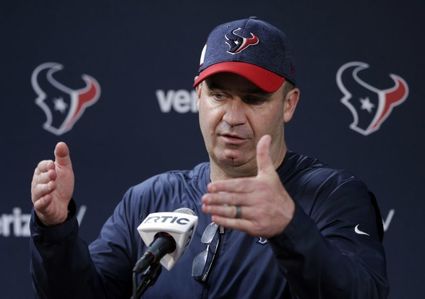 Last season the Houston Texans had their best chance of hosting an AFC championship game if they could have held on to a 24-0 early lead in their divisional round playoff game that they eventually got blown out by the world champion Kansas City Chiefs 51-31.

Although the Texans have many of the same players returning for this coronavirus season, most of the preseason predictions don’t even have Houston winning the same AFC South Division title they have captured in six of the last seven seasons.

To take that a step farther, this week’s edition of USA Today Sports Weekly has the 32 teams ranked in order of their projected talent, with the Houston Texans No. 20 with this evaluation, “Even if they’ve successfully spackled receiving corps following Hopkins deal, is 28th-ranked defense good enough to sustain AFC South kings?”

If one looks at this prognostication closely, they will notice that every team except the lowly Jacksonville Jaguars (30) are ranked higher than Houston in the AFC South Division, with Indianapolis sixth, Tennessee ninth and Arizona 19th.

Head Coach Bill O’Brien realized after last season that he probably had too much on his plate as head coach/general manager plus the offensive play-caller.

After last season, owner Cal McNair officially gave O’Brien the dual title Head Coach/General Manager—even though he did both jobs in 2019—and promoted Jack Easterby to executive vice-president of football operations.

“O’Brien and Easterby preside over the football side of the organization. O’Brien has a lot of responsibility, and his primary function if overseeing the team,” the article revealed.

“I’m able to concentrate on other things, more of the full-team picture,” O’Brien told the Chronicle. “I’m able to meet with players a little more on the other side of the ball and on special teams.”

The realignment of staff will make the planning for the coronavirus pandemic easier. O’Brien and Easterby have attempted to cover every possible scenario.

If O’Brien has to be quarantined because of positive tests for COVID-19 or has been around someone who has the virus, Crennel would step in for O’Brien—he has been head coach at Cleveland and Kansas City—and Easterby would take over the general manager duties if O’Brien couldn’t perform that responsibility.

O’Brien and Crennel could call plays again if Kelly or Weaver has to be quarantined. “Knock on wood, we’ve had zero positive tests, which is really good, especially with what is going on in Houston,” O’Brien pointed out.

“Up to this point, our guys have been very disciplined when they’ve left the building. They’ve done a great job,” he concluded.

KWICKIES…The Washington Football Team made NFL history Monday by hiring former running back Jason Wright as the new team president. The 38-year-old Wright, who is black, is only the fourth former NFL player to rise to that role.

I pointed out last week that the Houston Astros returned to Minute Maid Park riding a five-game losing streak. Going into Monday night’s action against the Colorado Rockies, the Astros have won four in a row with victories over San Francisco and Seattle, snapping their losing streak by sending 14 batters to the plate and scoring runs in the first inning Friday and breezing to an 11-1 victory. Slugger Yordan Alvarez, playing in his first game of the shortened season, blasted an opposite-field three-run home run in his first at-bat. The Astros’ bats again went silent, but the pitching came alive as they won 3-2, 2-1 and 3-2 with Sunday’s game won on a walk-off home run by young Kyle Tucker. In the last 10 games through Sunday, Astros starting pitchers have a collective ERA of 1.89 (12 earned runs in 57 innings).

The Houston Rockets opened the NBA playoffs last night against the Oklahoma Thunder in the “Bubble” at Disney World at Lake Buena Vista, Fla. The two teams play a best-of-seven series.

I can’t believe the Lamar Cardinals are still planning to play at Rice on Sept. 26. This is the only nonconference game on the Redbirds’ 2020 football schedule. The Southland Conference announced last week to cancel the league schedule this fall in hopes of playing these games in the spring. I don’t think that is a very good idea!!

JUST BETWEEN US…Jim Herman fired a 7-under 63 Sunday to overtake Billy Horschel and win the Wyndham Championship by one stroke and earn a spot in this week’s opening round of the FedEx Cup playoffs. In addition to the $1.152 million winner’s check, Herman will be playing tomorrow in the Northern Trust Championship by being one of the 125 eligible golfers teeing off at TPC Boston in Norton, MA. Round 2 will be played Aug. 27-30 in the BMW Championship at Olympian Fields Country Club in Olympian Fields, Illinois for the top 70 golfers in this week’s tourney. The final round will involve the top 30 Sept. 4-7 in the Tour Championship at the East Lake Golf Club in Atlanta.