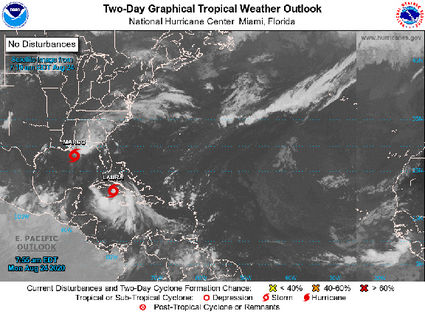 All Orange County public primary and secondary schools announced Sunday they are closing for this week of Aug. 24-28 because of two tropical weather systems that could come ashore in the next two to four days and seriously impact the county.

Lamar State College Orange reported that while “administrators are monitoring Hurricane Marco and Tropical Storm Laura,” that the plans Sunday night were that “the first day of our Fall 2020 semester will begin as scheduled Monday.”

But the school’s Facebook message said any students that “do not feel it is in your best interest to attend class [Monday], please notify your instructor.”

While the Lake Charles National Weather Service Weather Forecast Office pointed out the possible danger to the Southeast Texas-Southern Louisiana area, it also noted what Southeast Texans have learned in the last 15 years -- the unpredictability of storms coming up from the Gulf of Mexico.

As of Monday morning, Marco had been downgraded to Tropical Storm status and was forecast to continue weakening and dissipate on Wednesday.

Tropical Storm Laura, over the coast of Cuba this morning, will move into the Gulf of Mexico by early Tuesday.

It is expected to develop into a Category 2 or Category 3 hurricane packing winds of 96 to 129 miles per hour and produce up to 15 inches of rain across portions of the Gulf Coast near the Texas-Louisiana border from late Wednesday to Friday. The rain could cause widespread flash flooding and minor river flooding, according to the NWS.

“They eye of the hurricane [Laura] could pass over Orange County Texas,” noted Donald Jones, a Lake Charles meteorologist. “The cone of uncertainty [possible landfall] runs from Galveston Bay to Baton Rouge, Louisiana.”

“We expect rapid intensification from a real weak storm to a real strong storm tomorrow through the next 36 hours as it moves across the water,” Jones said.

Orange County announced Saturday afternoon it had sand bags available in each of its four precincts: at the Pct. 1 maintenance barn on Texas 87 at North Teal Road; Pct. 2 at its reopened office on Texas 62 in Mauriceville, across from Market Basket; Pct. 3 barn at 2502 W. Roundbunch Road; Pct. 4 barn at 375 Claiborne Street.

The City of Pinehurst announced it will have sand available from 8 a.m. to 3 p.m. Monday at its public works department on Lexington, and will extend those hours

Residents are instructed to bring their own shovels and bag the sand they need to protect their homes from rising water.

Decisions to close schools are made after school superintendents consult with each other, the National Weather Service, Orange County Emergency Management led by County Judge John Gothia and other emergency management experts from surrounding counties and Louisiana parishes likely to be affected.

At 4 p.m. Sunday, the National Weather noted that Tropical Storm Marco had become Hurricane Marco, its winds having grown to 74 miles per hour or more, enough to make it a Category 1.

But by Sunday night, the storm had lost steam and was again classified as a Tropical Storm.

Tropical Storm Laura has caused the most concern.

Still in the Caribbean Sunday, NWS’ predicted track for Laura at 4 p.m. Sunday called for it to pick up Category 1 to Category 3 winds (75 to 129 mph) and make landfall Wednesday in Southeast Louisiana, or Southeast Texas on Thursday, bringing up to 15 inches of rain Wednesday and Thursday.

The NWS noted at 4 p.m. Sunday that winds from a Category 2 hurricane could cause a storm surge of 10 feet over ground level along the coast. NWS said the possible storm surge could back up rivers and bayous and cause flooding 30 miles inland.

“Out of an abundance of caution, due to the threat of severe weather from storms Marco and Laura, we will be closed,” Monday through Friday, area school districts posted on their Facebook pages Sunday.

The cancellation of school also means all extracurricular events will be canceled.

This includes the first Friday night slate of games of the high school football season for Orange County teams.

That game will be lost along with home openers for Bridge City (against Buna) and Little Cypress-Mauriceville (Hamshire-Fannett). Orangefield was to open its season at Anahuac.