Citizens hit the road ahead of hurricane 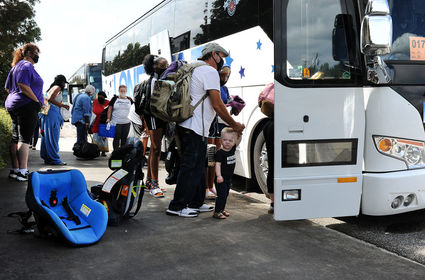 Cars, truck and vans from Orange County hit the road Tuesday morning in response to a mandatory evacuation order to flee the expected path of Hurricane Laura.

Traffic was steady heading north to East Texas and west to the Hill Country, but Texas Department of Transportation had logged no reports of major traffic tie-ups as of noon Tuesday.

The City of Orange Tuesday morning dispatched seven chartered buses from a debarkation station at Lamar State College Orange. The buses carried the citizens who lacked transportation and their pets to a shelter near San Antonio.

As befits the ongoing COVID-19 pandemic, the bus riders were socially distanced, with about 85 people spread over the seven buses.

"It seems like most people have left on their own," Orange Mayor Larry Spears, Jr., said. "I'm riding around town and I don't see a lot of people.

"I think a lot of people have seen the social media reports the last three to four days and said, 'I'm out of here.'"

Those left in Orange, with the exception of those working hard for customers at gas stations, convenience stores and Walmart, were busy boarding up their homes and businesses.

Essential workers like those working for local governments operation staffs and utility companies were doing their best to be prepared for the worst.

Spears said Orange has asked its citizens to conserve their water usage.

"We have put certain lift stations on standby," Spears said. "Jim Wolf [public works director] and his staff is doing a fantastic job. I want to thank all of our city staff for their work. Everyone is doing an amazing job." 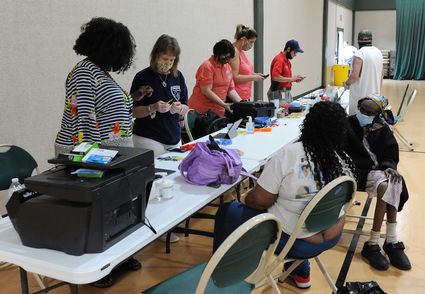 Entergy Texas is mobilizing a storm team of Entergy crews and contractors to restore power quickly and safely to customers should outages occur. In addition, the company is preparing to move equipment that sits in low-lying areas to higher ground should conditions warrant. High-water vehicles, marsh buggies, airboats and drones have also been secured should they be needed during any restoration efforts.

The company suggests customers download the Entergy App at entergyapp.com. It can be used to report outages and check on the status at their home and businesses.