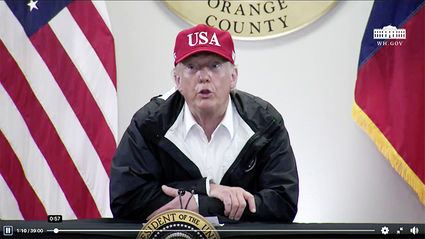 With Reporting from Mark Dunn

President Donald Trump made a quick 90-minute stop in Orange County Saturday afternoon at the end of a tour of Hurricane Laura storm damage in Louisiana and Texas.

The visit was anticipated and predicted by The Record Newspapers website a day earlier, but went unannounced by the White House except to local Republican Party officials and invited key civil and political personnel.

His time in Texas' most southeastern city was strictly private, local media members were told.

High winds ripped down many trees and rooftops locally and a third of all Orange County homes and businesses are currently without electricity, including the Orange County Convention and Expo Center, where the leaders met.

Built to do double duty as the Orange County Emergency Operations Center, the Expo Center is being operated by generators that were part of the building's design when it was constructed more than a decade ago.

President Donald Trump traveled aboard his Marine One helicopter and the Texas leaders who traveled to meet him flew aboard two $70 million U.S. Marine Osprey Vertical Takeoff and Landing (VTOL) aircraft. They landed at Orange County Airport a few minutes after 3 p.m. Saturday after a stop in Lake Charles, Louisiana, to view first-hand damage from Category 4 Hurricane Laura.

Trump then traveled via motorcade from the location on Texas 87 to the Orange County Expo and Convention Center on FM 1442. The event was private and only a limited number of media members pre-approved by the White House and few, if any, of them local, were allowed in.

The WhiteHouse.gov stream that carried some of his remarks over the internet went off at 4:30 p.m.

Trump wore his usual weekend outfit, white pants and white golf shirt topped by a black windbreaker with the Presidential seal and a red cap, this one with "USA" on the front and "Trump" on the back.

He sat at the head of a U-shaped set of tables and chairs, in front of a backdrop of United States and Texas flags separated by an Orange County seal, and behind a Presidential seal.

Orange Mayor Larry Spears Jr. was missing at the meeting. He reportedly tested positive for COVID-19 during the wait for the President to arrive.

Several other Orange County mayors, county commissioners and other dignitaries were assigned secondary seating for what essentially was a campaign event in advance of the Nov. 3, 2020 election.

According to the latest poll available on the website FiveThirtyEight, Trump currently trails Democrat Joe Biden 48 percent to 47 percent among likely Texas voters in the race for the White House. That poll was conducted among 764 Texans a week ago by North Carolina's Public Policy Polling, which rates a "B" rating from the website.

Trump landed in Lake Charles at about 12:45 p.m. to visit with supporters there about the government's response to Hurricane Laura, a Category 4 storm that hammered southwest Louisiana with winds up to 140 mph early Thursday morning.

Wind gauges in Orange captured gusts of 100 mph, and a huge swath of the Gulf Coast, from Port Arthur to Mississippi, has suffered power outages.

At the airport, police vehicles from as far away as Houston lined the entryway from Texas 87 and the area was patrolled "by guys with guns," one reporter said. A gun-packing man dressed in camouflage ordered a staffer of The Record News to leave, saying the press was restricted to the later gathering at the Expo Center.

Trump supporters lined Texas 87 near the airport, and FM 1442, near the Expo Center, summoned by national or local Republican Party social media posts. They were ready with flags and campaign signs set to greet the President's motorcade, but first had to endure some heavy rain showers.

At 1:30 p.m., as Trump began a tour of a storm damaged neighborhood in Lake Charles, Precinct 3 Constable Brad Frye was working to gut out his office at the Orange County Airport. Both his and the office of Precinct 3 Commissioner Kirk Roccaforte, located at the county airport, lost their roofs to Hurricane Laura.

Back in Lake Charles, Louisiana Gov. John Bel Edwards and U.S. Senator John Kennedy showed Trump around the storm's devastation as workers scurried in the background cutting up huge fallen trees with chainsaws, according to a livestream from KPLC TV.

Over at the Orange County Expo Center, security was again turning back most of the media members who gathered there. A representative of Orange County's biggest circulating published news source, the Record Newspapers, was turned away along with a crew from Trump-friendly Sinclair Broadcasting station KFDM Channel 6 and a reporter from Beaumont radio station KLVI. They were told that only invited press members would be allowed to hear or photograph the president's speech.

The young aide who was refusing the access explained the White House had pre-approved "a local pool reporter and five state pool reporters."

An Orange radio station owner was among those who received an invitation from the White House to enter the Expo Center. Like the government officials allowed inside, he had to take a rapid COVID-19 test upon entry to the building.

That followed a flyover of east Texas by the governor to look at damage from the hurricane. He declared, "Of all the areas we saw, the worst we saw was Orange. We saw more rooftops ripped off, more shingles missing, more big pieces of metal wrapped around trees."

Abbott praised Trump's reaction to Laura, which included approving the pre-placement of people and material and for declaring a national disaster in 62 Texas counties all ahead of the storm's making landfall. The two-term governor who was previously Texas' Attorney General said in nearly two decades in elected office, "Never before have I seen an administration respond as quickly as President Trump has been."

Orange County, which may be without electricity for another two weeks or more because of the wind blowing over trees onto power lines and blowing over poles that downed transformers, has recorded no storm deaths.

Texas had at least five storm deaths, a Hemphill man crushed by a tree and four in Jefferson County killed by carbon monoxide poisoning caused by running a gas-powered generator indoors.