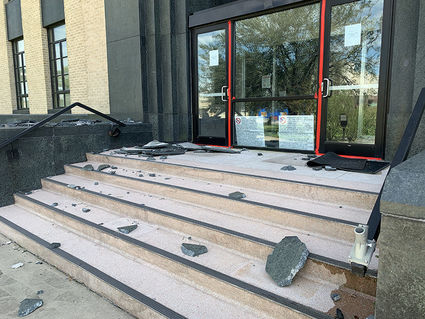 Hunks of marble lie on the steps of the Orange County Courthouse Thursday afternoon after they were blown off by Hurricane Laura overnight. On the back side of the courthouse, about a dozen vehicles belonging to members of the Sheriff's Office had windshields and windows shattered by pea gravel being rocketed from the courthouse roof to the parking lot below by the gusts of about 100 mph.

After four years of dithering over a repair and just more than a year after it finally got fixed, the Orange County Courthouse has lost its marble again.

It's time to check the warranty.

Gusts of as much as 100 mph from Hurricane Laura caused a goodly chunk of the $200,000 repair to crash from the top of the three-story facade over the courthouse's main entrance at the end of Orange's Main Street.

No one was injured by the falling rock, and not just because Hurricane Laura blew through this area about 2 a.m. Thursday on its way into Lake Charles.

That courthouse entrance was covered for four years by yellow caution tape and a three-story scaffolding blockade after marble first fell in 2015, so people found other ways in. Only a few people used the front entry because of the absence of parking lots and the presence of three more entries in the back.

And, several months ago, the front door of the building recognized on the Register of Texas Historic Places with the still new-car fresh $200,000 fix was permanently closed because of both COVID-19 and security concerns.

Orange County Commissioners Court spent three and a half years trying to get others to pay much of the cost for the marble and other courthouse repairs by going after grants from FEMA (from 2017's Tropical Storm Harvey and other flood events) or the Texas Historical Commission.

The red tape delays by both and restrictions on future alterations that were part of the THC deal finally got to be too much. 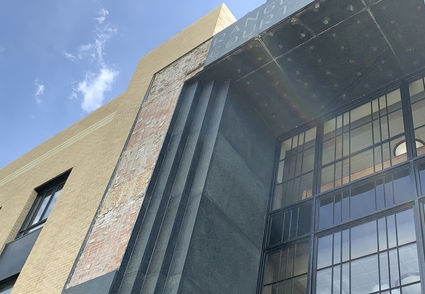 Under then-County Judge Dean Crooks, the second of four Orange County judges in a little over a year, the decision was made to quit waiting on grants, limit the scope of the plans and use all county money. That decision came in January of 2019 and the repair was finished and the scaffolds and yellow tape came down Aug. 6, 2019 -- just over a year before the marble chunks came tumbling down again.

Current County Judge John Gothia, a County Commissioner in January 2019, said it was on the list of things to visit about with the county's insurer once assessment of all county properties is completed.