Sheriff: 'We dodged a bullet' from Laura 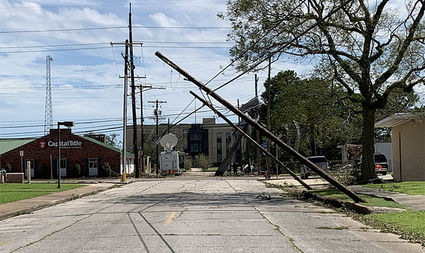 Power poles lean across Main Street in downtown Orange on its approach to the County Courthouse Thursday afternoon after the back side of Hurricane Laura blew wind gusts nearing 80 mph across Orange.

"We dodged a bullet on this one," he said as dawn broke over Southeast Texas Thursday morning a few hours after Hurricane Laura had blown through.

Entergy Texas reported 35,000 power outages in Orange County as of 9 a.m.Orange Mayor Larry Spears Jr., reported a lot of trees down on power lines, blown out glass at restaurants on 16th Street and even some metal roofs blown off.

Mooney and about 40 deputies encamped at the Orange County Jail overnight as high winds from Hurricane Laura caused a lot of broken glass and even some structural damage to the courthouse complex located between 6th Street and Border Street in downtown Orange.

Laura made landfall as a Category 4 hurricane in Cameron Parish, just across the Sabine River from Orange, shortly after midnight Tuesday, and wind gusts as high as 140 miles per hour were recorded in Cameron Parish as the eye approached Lake Charles early this morning.

"I just got back from Vidor, where there are a few lines down and trees down," Mooney said. "The worst damage I've seen was by the courthouse. Some of the granite near the top of the courthouse was knocked off and a lot of windows were broken."

Mooney said 138 county jail inmates were transferred via school buses to Athens, Texas, ahead of the storm. Wednesday morning, 70 trusted inmates remained at the downtown jail.

"We've only had one call for service as of 7:30," Mooney said, "and that was a disturbance call. Some of my people did catch a guy breaking into a house and took him to jail.

"But mostly everybody hunkered down."