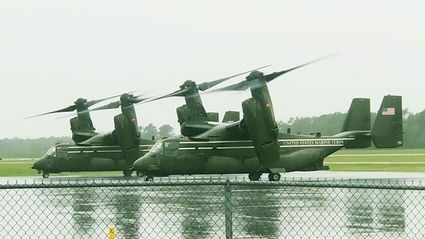 President Donald Trump said he plans to visit Texas this weekend on a trip to survey damage from Hurricane Laura and he could make a stop in Orange.

If so, it will come on the heels of a Thursday flyover tour and Orange City Hall press conference by all the Texas political stars, led by Gov. Greg Abbott and the state's U.S. Senators, John Cornyn and Ted Cruz.

They were all in the area to see first-hand the damage in their state caused by Hurricane Laura, which saved its highest winds and storm surge for the coast of Louisiana.

Abbott sat next to Orange County Judge John Gothia while the rest of the dignitaries, including Orange Mayor Larry Spears Jr., stood behind the second-term governor.

Gothia said this was the sixth time in his four years in county office, first as a commissioner then as judge, for Orange County to manage a disaster from the Convention and Expo Center on FM 1442, which was built after the area was pounded by Hurricanes Rita and Ike in 2005 and 2008.

The judge said he and the governor were sharing a lot of time in meetings -- many virtual since the Covid outbreak began in March -- and conferences.

"I've talked to him quite a lot," Gothia said. "But I've had to deal with a lot of disaster to get that. And I'd rather not have to."

Abbott has developed a good bond with President Trump, as he was one of the first governors to reopen his state after the initial Covid-19 shutdowns in March that have resulted in record unemployment across the nation.

Covid-19 has infected more than 5.9 million Americans and its U.S. death toll has topped 180,000 in six months, according to Johns Hopkins Medical Center. That's nearly as many as died in combat -- 215,000 -- during the five-year Civil War.

Of the politicians at Orange City Hall Thursday, only one, faces a tough re-election battle.

Cornyn has been Senate Majority Leader Mitch McConnell's No. 2 man as Senate Whip for the past two Congressional sessions.

He told Abbott, "The lieutenant governor and Texas Legislature and you, Governor, hopefully will allow Orange County to benefit from an additional 27 miles of enhanced levee system," part of the Coastal Spine/"Ike Dike" project that's been percolating since Hurricane Ike's storm surge pounded the Texas coast from Galveston to Bridge City.

Orange County Commissioners are close to an agreement to have the state's General Land Office pay the county's $58 million portion needed to begin design work for the project being overseen by the U.S. Army Corps of Engineers.

Cornyn has a seven-point lead over Hegar in the latest Texas poll reported by the website FiveThirtyEight. The same source shows Trump currently trailing Democrat Joe Biden 48 percent to 47 percent among likely Texas voters in the race for the White House.

Trump accepted the Republican Party nomination for re-election Thursday night. Earlier that day he told reporters, "We'll probably be going Saturday or Sunday and we'll be heading to Texas and Louisiana and maybe an additional stop."

Gothia said the governor's Orange visit was a surprise to him until shortly before the city hall event. It was well known that Abbott was planning a flyover of Laura's damage but that was all. Gothia said he was notified of the news conference less than an hour before it happened.

Two Marine Corps vertical takeoff and landing Osprey aircrafts and a slightly smaller version of the President's Marine One helicopter carried the state and national leaders to the Orange County Airport.

"Of all the areas we saw, the worst we saw was Orange," the governor said. "We saw more rooftops ripped off, more shingles missing, more big pieces of metal wrapped around trees."

There have been no deaths reported from the storm in Orange County and while billboards and metal roofs were shredded and many trees were downed, pulling down power lines, poles and transformers with them, damage to homes appears relatively light.

Getting electricity restored could take two to three weeks, Gothia said. Entergy Texas issued an update Friday, saying power could be reconnected to all the 37,000 outages in Orange County by Sept. 4.

All Orange County schools will be missing at least two weeks because of the hurricane, with the public school districts and Lamar State College Orange announcing they are closed until at least Sept. 7.

Gothia said Entergy currently has about 2,000 employees working to restore power in the county.

The death toll in Texas from Laura is four, a man crushed by a falling tree in Hemphill and three people in Port Arthur killed by carbon monoxide poisoning from using a gas-powered generator indoors.

"If we made it through a Category 4 hurricane and only had a small loss of life, it showed our preparation paid off," the governor said.

A Marine helicopter resembling -- but smaller than -- President Donald Trump's Marine One landed at Orange County Airport Thursday in advance of a press conference at Orange City Hall.

"One thing that saved lives were the evacuation orders made by local officials. That's why the loss of life was minimized. It could have been far worse."