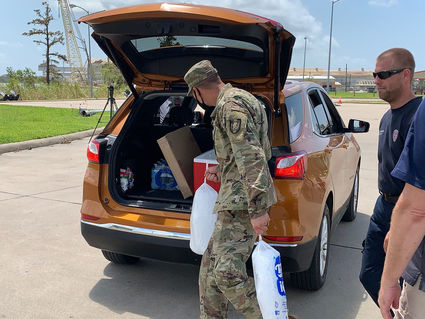 A member of the Texas National Guard carries bags of ice to the trunk of a car Monday at the Orange Boat Ramp Point of Distribution (POD) site. The Texas Department of Emergency Management is providing ice, water, tarps and MREs. Several sites ran short of MREs Monday. Some sites had additional cleaning material.

Due to the lack of need a week after Hurricane Laura came ashore, all of the four Points of Distribution (PODS) sites in Orange County were shut down Thursday afternoon.

Before they did, they attracted lines of cars as much as a mile long and members of the Texas National Guard joined volunteers, both local responders from around the state and local communities loaded many truckloads of supplies into residents' cars.

The breakdown per POD is below: 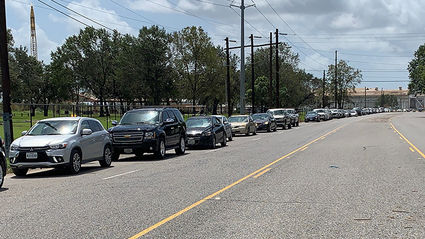 Cars formed a mile-long line from Front Street, near Lamar State College Orange campus, across Green Avenue and up Simmons Drive to the Boat Ramp turnoff, then inside the Port of Orange to reach the Orange County Precinct 1 Point of Distribution site.

Bridge City Intermediate - at this time we do not have a break down.

Additionally, a number of local and outside non-profits and teams of volunteers provided free lunches and emergency supplies in what seemed like every other address on a main street like Strickland Drive or 16th Street.

Sabine FCU on Strickland Drive in Orange hosted representatives from Baytown businesses who brought a trailer-mounted smoker setup and a corps of helpers to dispenses hot links and beans meals with all the trimmings to go with ice-cold water.

After being helped by others during previous hurricanes and recent Tropical Storms like Harvey and Imelda, the visitors came to Southeast Texas to pay forward some of the Gulf Coast neighbor helping neighbor community spirit this area is famous for.

Local businesses and faith-based groups donated meals, as did the Salvation Army and some of its local sponsors.