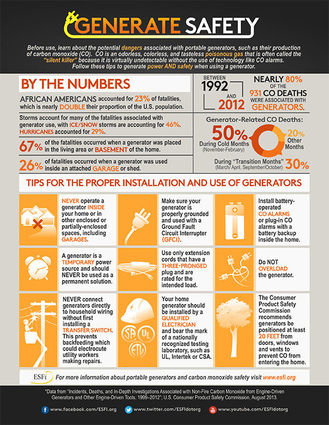 City of Orange Fire Chief David Frenzel told this week's emergency city council meeting his department has had "an immense amount of calls reported to carbon monoxide" because of improper use of gasoline-powered generators.

Fire Marshal John Bilbo updated that intel Wednesday morning: "We're still getting a lot of calls. Our preliminary thought is the death we had the other day is going to be called CO-related, but we won't know for sure until we get the report back."

Tyrone Heard, a 48-year-old man from Orange, died early Tuesday morning at a hospital after he was found unconscious in his house in the city's Roselawn addition, Bilbo confirmed.

Frenzel said Monday afternoon some citizens in distress that the city had responded to had registered levels as high as 300 parts per million of the carbon monoxide, a tasteless, odorless and indetectable by humans gas, in their bloodstream.

As many as 8 parts per million could cause congestive heart failure in people with preexisting conditions. In high enough concentrations, carbon monoxide can kill within minutes. It claims hundreds of lives each year and survivors of CO poisoning can be left with psychological and neurological symptoms

Carbon monoxide poisoning has been linked to several deaths in both Port Arthur and the Lake Charles area after Category 4 Hurricane Laura blew through the area after midnight Wednesday night, knocking the power off for 291,000 Entergy Texas customers from the north side of Houston to the state line. More than 35,000 outages were initially reported in Orange County.

Additionally, Frenzel reported a structure fire in north Orange was caused by a generator that was too close to a house. Exhaust from the generator set the house on fire.

Bilbo couldn't access figures telling exactly how many calls his department had answered from one of its three stations because of computer outages.

"Our internet has been spotty and all our alerts are kept on a cloud-based system," he said. "We've had a lot of calls  that haven't been put into our system yet.

"But it's kept us hopping, to say the least. And whenever they do turn the power on in a house or business, things start to popping."

Entergy Texas reported that 20,575 total customers remained without power Wednesday morning, almost 18,000 of those in Orange County. But it is sticking to its timetable saying all those outages will be back on line by end of Friday, Sept. 4.

In the meantime, citizens should beware of generators and take proper precautions, Bilbo said.

Generators should be used in well ventilated locations outside at least 5 feet away from all doors, windows and vent openings.

Never use a generator in an attached garage, even with the door open.

Place generators so that exhaust fumes can't enter the home through windows, doors or other openings in the building. The exhaust must be directed away from the building.

Be sure to install carbon monoxide (CO) alarms in your home, following manufacturer's instructions for proper placement.

Turn off generators and let them cool down before refueling. Never refuel a generator while it is hot. Store fuel for the generator in a container that is intended for the purpose, outside of living areas.

For public safety, curfews remain in effect for all of Orange County from 9 p.m. to 5 p.m., because many areas still do not have lighting after dark.

Entergy Texas reported it restored power overnight Tuesday to main areas in Mauriceville and Bridge City, and will be working Thursday in McLewis, Victory Gardens south of Texas 87 and east of Cow Bayou and in Roselawn, south and west of FM 105 and Strickland Drive

Point of Distribution (PODs) will remain open from 10 a.m. to 6 p.m. through at least Thursday.

The four POD sites being serviced by the military and secured by the Orange County Sheriff's Office are at the Orange Boat Ramp, Bridge City Intermediate School, the old Market Basket location on Texas 62 in Mauriceville and at Turning Point Church in Vidor.

They will offer residents drive-through service for water, ice and meals ready to eat (MREs).