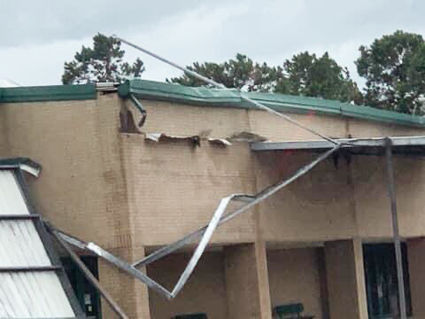 The hurricane made landfall as a Category 4 storm 15 miles east of Orange in Cameron Parish, Louisiana, early on Aug. 27 and lashed Cameron and Calcasieu Parishes with storm surge of 10 feet and winds of up to 150 miles per hour.

Gusts in Orange County were clocked as high as 100 mph and ripped the roofs off homes and buildings, peeling back metal roofs and awnings, and pushed down power poles and trees that crashed onto power lines and then pulled down the poles. Much of the county was without electricity for a week.

Hurricane Laura struck after the entire United States has struggled with five months of ever-changing school schedules altered by the COVID-19 pandemic and made an already uncertain situation even more tricky for students, parents, teachers and school administrators.

“LCM has significant damage from the storm,” said Sherry Combs, community relations coordinator for the district. “We lost the Transportation building and had damage to multiple buses that we are in the process of repairing.

"We will not be allowed to use these buses until the repairs are completed. We are also in the process of relocating Transportation at this time since the building took a very hard hit.” 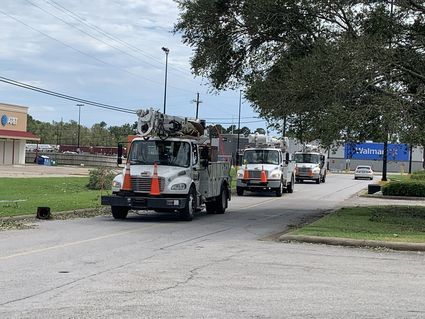 A line of utility contractors who have come to Orange's rescue pull out of the Walmart parking lot last Thursday en route for their next destination, a parking lot down the street at the old Sears shopping center on MacArthur Drive to join hundreds of others awaiting orders after an initial damage assessment.

Friday morning, Entergy Texas reported that Orange and the surrounding area had about 5,000 outages remaining to energize from the initial 35,000 outages and it hoped to have them all powered back up by dark Friday.

For its east Texas system reaching from northeast Houston, Entergy reported more than 291,000 customers were without power at some point because of the Aug. 27 storm, and only 6,200 of those remained out of service Friday morning.