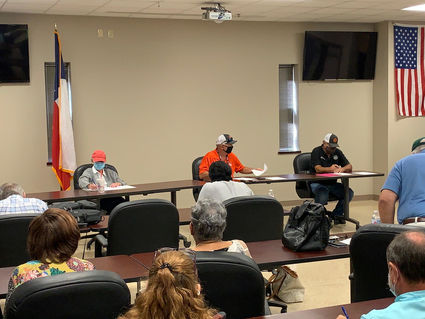 Hurricane Laura destroyed seven Orange County homes, left 70 with major damage and 1,317 more with minor and light damage, according to the first damage assessments from the Category 4 storm that did its worst damage east of the Sabine River, in Louisiana.

Michelle Tubbleville, director of special projects for Orange County, read the list gathered from surveying 1,394 homes negatively impacted by the storm. She presented it at Monday morning's emergency meeting of the Orange County Commissioners Court.

She also said 102 businesses were surveyed, and none of them were destroyed. Four had major damage, 97 minor damage and 11 light impact, according to categories used by the Federal Emergency Management Agency, which already had damage estimators on the ground Thursday morning.

Tubbleville said the county would not be releasing any updates until Friday. But she encouraged all Orange County citizens to submit a damage survey online – even if your home or business property was not damaged.

"Orange County citizens are very highly encouraged to take the survey, even if you don't have damage," she said. "This helps the county pass the names of those in need on to volunteer organizations that can help our recovery.

"And Orange County Disaster Recovery also wants to start writing up grant requests, to gain financial assistance for our residents."

The internet address for the Orange County self-reporting damage to home and business survey is https://arcgis.is/uOrOb .

Tubbleville said it is important to submit photos showing all disaster-caused damages and an exterior photo of the entire residence. She emphasized the importance of residents who may not be comfortable around computers, cell phones or other electronic devices to enlist a neighbor or younger relative to help with this vital work.

Self-reporting should also automatically sign those with storm damage up with Crisis Cleanup, a nationwide volunteer clearinghouse that connects owners of storm-damaged property with volunteers from local relief organizations, community groups and faith communities who may be able to assist with cutting fallen trees; drywall, flooring and appliance removal; tarping roofs and mold mitigation.

Crisis Cleanup's info sheet says, "All services are free, but service is not guaranteed due to the overwhelming need. Our hotline will remain open through Sept. 14, 2020."

If residents cannot do the survey, but want to be included on Crisis Cleanup's list of homes, dial the Crisis Cleanup Hurricane Marco & Laura Home Cleanup Hotline number, 844-965-1386.

"They go straight to help individuals' needs," she said. "Of course, we provide case management [to document those needs]. We took in and distributed $1.2 million during Harvey. That money goes to keep the people here, living in our community."

Gothia said he'd heard a wind gauge near the Expo Center had picked up a gust at 104 mph when Laura's western edge passed over Orange County at about 2 p.m. Thursday morning, Aug. 27. Of course, Louisiana had winds as high as 150 mph.

There were no direct deaths reported in Orange County from the storm, but it is suspected that one Orange man died as a result of carbon monoxide poisoning caused by running a generator in the hours after the storm passed. Laura's winds knocked down trees and power poles that left more than 35,000 power outages in Orange County, according to Entergy Texas, Southeast Texas' lone electricity provider.

Entergy Texas reported that almost 18,000 Orange County customers remained without power Wednesday morning. But it is sticking to its announced timetable saying all those outages will be back on line by end of Friday, Sept. 4.

More than 6,000 Entergy employees and contractors were working in Jefferson and Orange counties this week to restore power.

Also, commissioners voted to keep the county landfill open, for no charge to citizens, from 7 a.m. to 6 p.m. through Tuesday, Sept. 8. There will be a special container to dispose of rotted food.

Commissioners triggered their storm debris hauler, AshBritt, to begin picking up trashes from in front of homes as soon as the Entergy crews had completed their work.

Any hurricane related materials citizens want removed from their property must be separated into four distinct categories, according to FEMA requirements:

The debris should be placed to the side of the road in a manner that is not blocking the roadway in any way. The debris piles should be accessible for pickup with a grapple truck.

It is recommended homeowners take photos of all debris placed curbside for pickup to ensure proper documentation. Further, homeowners should verify with their insurance carriers any other additional documentation requirements they may have.

Kurt Guidry, county maintenance director, reported that 18 of the county's 103 buildings received some type of damage, the worst occurring at the Orange County Airport location of the Precinct 3 offices. Roofs were ripped off both the headquarters for Commissioner Kirk Roccaforte and Constable Brad Frye.

The downtown Juvenile Probation Building and jail dorms suffered roof damage and windows at the historic 1937 County Courthouse again couldn't hold back wind-driven rain around their seals, as happened in Tropical Storm Harvey.

"We had damage to the plaster around windows and almost all the building carpet is wet," Guidry said. "It's going to be a process to get people back up and running."

Besides the courthouses, both the district and county clerk's additions on either end of the courthouse suffered damage. Three hangars and the Records Management office, all at the Airport, were damaged. Also on the list is the County Administration Building, Elections Administration Building, Precinct 2 Justice of the Peace Building, the crime lab both the old and new maintenance shops.

In Monday's other big meeting, an emergency session of the Orange City Council, a new tax rate hearing date was set for 9 a.m. Sept. 8. That was required because the one previously scheduled was canceled by Hurricane Laura.

With no power, the city's biggest concern is its wastewater system. Water is safe to drink and, in fact, the city is supplying water trucks for Lake Charles' St. Patrick Hospital.

But the sewer pumps that power the lift stations had to be shut down ahead of a storm to prevent cataclysmic damage. Entergy Texas loaned the city a one-megawatt (1,000 kilowatts) generator which should ease the problem.

Back at the county meeting, Ardoin, the emergency manager coordinator, had a warning for all:

"I'm hesitant to mention it, but we do have several other storms out there in the Atlantic," he said. "We're starting to monitor those. Say a prayer."

Gothia reminded that Hurricane Laura would continue to take a toll for a while. 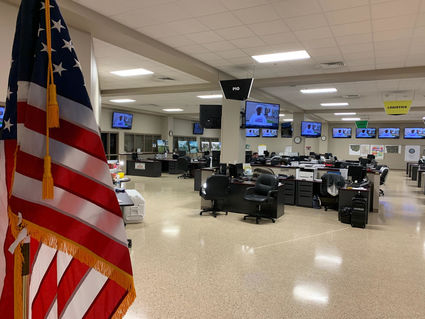 The Orange County Emergency Operations Center at The County Convention and Expo Center on FM 1442 is nearly empty Monday morning as most other EOC employees take part in a meeting with County Judge John Gothia in another part of the building. The Orange County government is continuing to operate out of the Expo building that was designed to run on generators because the county complex of courthouse and administration building continues to be without electricity.

"The main thing is, be safe. Tell your friends to be safe. Just because the storm's gone, the danger is not. There's a lot of stuff out there that'll still hurt you. I personally know five people that have fallen off their roof, some with pretty major injuries," the judge said.

"That and the trees. There's a lot of trees that are damaged, that are leaning on other trees. Every time another little storm comes up, that stuff is going to start falling. Be careful."