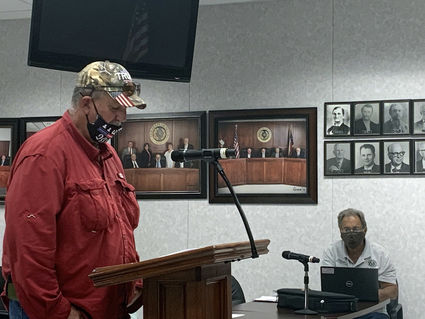 The proposed budget he submitted during Tuesday afternoon's required public budget hearing was based, he said, on no raise in the tax rate.

"Based on the public hearing, we had no support for those proposed projects," he said of several million dollars of drainage improvements and upgrades for county road and election equipment he proposed, "so we did not use the .587 rate we had proposed.

On Aug. 18, seven of eight speakers at the tax rate hearing strongly opposed the proposed tax rate increase of 4.5 cents per $100 value that Commissioners' Court had proposed in early August by a 4-1 vote with Commissioner Robert Viator opposed.

And they all said it was because of the hit to the local economy caused by COVID-19's required business shutdowns and resultant layoffs.

That was before Hurricane Laura sent trees and rooftops flying Aug. 27.

But Gothia said instead of shopping from the county's wish list, it would draw on some of what he said was a $14 million reserve fund.

"When Commissioner Trahan and I arrived on Commissioners Court in 2017, the county had $356,000 in reserve. Now we expect to have a fund balance of $13 million at the end of next year.

"We've finally made it to that number that you're supposed to have in reserve in case of emergencies, so we're in pretty good shape."

The final budget and tax rate will be voted on at the meeting of Commissioners Court on Sept. 22.

They were expected to be voted on Tuesday, based on a pre-hurricane timetable. As it was, the copies prepared by Gothia and County Auditor Pennee Schmitt were hot off the copier when passed out to commissioners as Tuesday's 1 p.m. budget hearing opened.

Budgeted expenditures for 2021 are projected to be $52.8 million from total general funds and $6.4 million from restricted funds, for total projected expenses of $59.3 million.

Schmitt said expenses for the Sheriff's Office and the County Jail make up 50-53% of the county's general fund budget.

More than half all 250-odd county employees work for the Sheriff's Office, which sets its own budget. Jail budget is set by state law.

Budgeted revenue figures for 2021 included $2.9 million of restricted funds, money that can be used only for specific purposes and not available to the general fund.

Gothia said the reason restricted funds expenses were so much more than restricted funds revenue was because the Sheriff's Office had used its restricted drug seizure funds to purchase a new fleet of vehicles, instead of using county general funds.

"With the Sheriff's Office doing what they're doing, it allows us to help other departments."

Gothia pointed out that the fund balance could face as much as a $5.5 million hit from Hurricane Laura.

At the regular Commissioners Court meeting that followed the budget hearing, the county authorized an emergency expenditure amendment of $5.5 million to the soon expiring 2020 budget.

The bookkeeping adjustment will keep expenses in the year they were incurred. As government reimbursement checks come in, possibly years from now, they will be credited to the 2020 expense.

"The estimated cost of the cleanup is $5.5 million," Gothia said. "Even if we get government [FEMA] assistance, we'll still be responsible for 10 to 25 percent. So that's a little over $1 million we'd have to take out of reserves."

The only person citizen to speak at the public budget hearing was Dean Fuller.

He was upset that government had prevented him from evicting non-paying renters in his housing properties for months and was now forcing him to pay all eviction costs while first responders were dining on catered meals of stuffed quail and steak and shrimp, according to menus from the County's Emergency Operations Center posted on websites by county employees.

The bad optics, including having county employees post "selfies" of President Donald Trump walking past their desks in the media-not-allowed EOC, were unfortunate.

Gothia told Fuller that the county had nothing to do with a prohibition on evictions, and that the meal provider for the EOC had been hired as a low bidder months before the storm and came up with the menus without county assistance.

"We had 350 people from outside the county come to help us the night of the storm. We try to take care of those people," Gothia said. "The only people that got fed were first responders, and we had 350 of them sleeping shoulder to shoulder the first night.

"We didn't bid on quail. We bid on a breakfast and a lunch."

For those affected by the storms, the county agreed to keep open the county landfill, at no charge, for two more weeks, seven days a week, from 7 a.m. to 6 p.m., through Sept. 22.

Joel Ardoin, county emergency management coordinator, said the estimate on total debris to be removed is 300,000 cubic yards and 11,705 cubic yards were picked up Monday in the West Orange-Pinehurst areas.

Ardoin said he thought Southeast Texas had already met the threshold of $38 million in storm damage to qualify for federal reimbursement – "we've documented $50 million damages – and that the state needed a total of 800 uninsured, destroyed homes to qualify for individual assistance, and so far, 627 such homes had been identified.

After Tropical Storm Imelda in 2019, Texas homeowners qualified for individual assistance but the local governments did not get public assistance because it didn't have enough damage, according to FEMA.

Kurt Guidry, county maintenance director, reported that the two worst instances of damage to county property happened when roofs were torn off the jail dormitory and the airport area building that housed the Precinct 3 commissioner and constable offices.

The county approved hiring Interstate to do drying and buildout work on county buildings, some of which had wet carpet after rain entered via roof or window seals.

The commissioners voted no to a Trump-endorsed idea to withhold payroll taxes from its employees checks for the remainder of 2020. The kicker is the employees will have to have their checks docked twice in the first three months of 2021 to make up for it.

"They're kind of basing it on forgiveness [of the 2020 taxes]," Commissioner Theresa Beauchamp said.

Viator made the motion not to participate and Commissioner Kirk Roccaforte seconded the motion which passed unanimously.

It is expected the project would help shift the watershed from Jasper and Newton counties from Orange County bayous to the river that separates Texas and Louisiana.