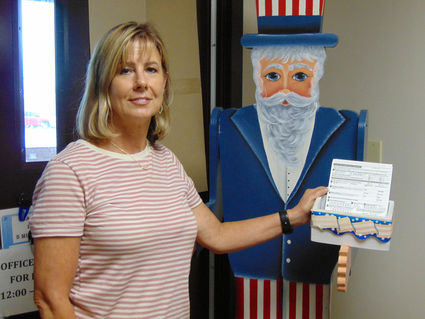 The number of people applying to vote by mail in Orange County has increased, Elections Administrator Tina Barrow said earlier this week.

But so have the number of people hired to count those ballots and oversee a socially distanced Nov. 3 election.

President Donald Trump has predicted that an increase in mail-in ballots could cause a delay of days or weeks to decide the final vote count, but Barrow says she expects Orange County’s vote-counting to be complete, as usual, within a few hours of the polls closing on Election Day.

Because of the COVID-19 pandemic, an extra, third, week of early voting has been added this year, meaning ballots may be cast as early as Oct. 13.

The record of 32,294 was set in 2016, when Trump was elected despite losing the popular vote count nationally.

Trump was super popular in Orange County in 2016, though, whipping Democrat Hillary Clinton by more than a 4-1 margin, winning 81% of the vote to Clinton’s 19%.

Barrow says the reason she expects a bigger turnout includes the fact that seven city, school and taxing entities will also be holding their elections on that date, six of them having been postponed from May by the COVID shutdown.

The local elections will be for mayor in Pinehurst, one city council spot each in Orange and Bridge City and four in Rose City, for two school board seats in Bridge City and one in Orangefield, and for two seats on the Orange County Appraisal District.

The coronavirus threat – 1,822 cases and 39 deaths had been reported in the county as of Monday – continues and Barrow’s department has received an $83,000 CARES Act grant to help pay for extra staffing made necessary by the distancing rules that will be in place and also to clean each polling place as voting takes place.

“We’ll use that money for staffing, security, communication and supplies,” Barrow said. “We have all the PPE stuff (personal protective equipment) we’ve got to buy, additional workers to get all the machines cleaned and extra workers at polling locations so they can clean stuff.”

The County Elections Administration office also received a $120,000 Help America Vote Act Security grant that required a $16,000 matching payment by the county. Barrow said that money will purchase 31 Express Vote machines, like the 36 the county now owns, and four scanners that help count the paper ballots generated by the machines.

But the elections veteran says it is unlikely the equipment will be received in time to use for this coming election.

The Express Vote machines were introduced to the county voting process two years ago and will be in heavy use during early voting. Voters use a touch screen computer to place their votes but the votes are not recorded by computer. Instead, the machines issue a printed out ballot for voters to double check before inserting in a ballot box.

The early voting ballot boxes are locked and stored at the Elections Administration office until Election Day, when they are counted by Barrow and her staff. That involves running the ballots through a scanner that generates totals from each box. Those numbers are released to the public after the polls close at 7 p.m.

Election day ballots turned in via the Express Vote machines or the old hand-marked bubble ballots are run through county scanners after the polls close.

Less than third of all votes cast in Orange County in 2016 came on Election Day.

The Orange County record for early voting was set in 2016, with 22,730 voters choosing to avoid the election-day rush. That was 70.3% of all votes cast.

President Trump and state Republicans like Lt. Gov. Dan Patrick and Attorney General Dan Paxton have predicted that mail-in voting will lead to voter fraud – although history does not support that claim – and Democrats counter that Republicans are trying to suppress voting by many means, including disqualifying a high number of mail-in ballots.

But Barrow says that’s not the way she works.

“But it’s not based on if your signature is exactly the same, it’s if you sign one and somebody else signs the other and it’s clearly two different people’s handwriting. We’ve always done it that way. A lot of the stuff that you’re hearing, they’ve just blown out of proportion.”

The deadline for applying for voting by mail is Oct. 23, Barrow said.

Another election issue getting a lot of play in the national media this year is a possible shortage of poll workers because of reluctance to be in confined spaces with others because of COVID.

“We haven’t lost too many so far, but we’re still in the process of finding that out,” Barrow said. “We’re going to have more judges, because of COVID, and people having to be six feet apart. We usually have three to four per election. We’ll add anywhere from one to two people extra.”

Election judges make $12 an hour and are chosen by the chairmen of each of the county’s political parties. The winning side in each precinct in the last gubernatorial race gets to provide the precinct judge and the losing side provides the alternate judge.

BALLOT BY MAIL – To qualify, you must be over 65, or disabled, or plan to be out of town on election day.