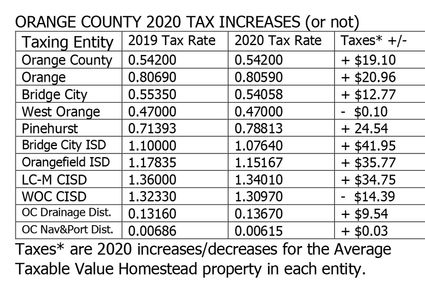 Only two of 11 top Orange County taxing entities went up on their tax rates for 2020.

Unfortunately, the same won't be said for many tax bills.

Because of a 3.7% rise in the values of the county's taxable property in the past year, the tax bill for an average homeowner will increase about $75 when it arrives next month.

Roughly about 3 or 4 percent.

The City of Orange was the last of the area's four cities, four school districts and three county governments to set its tax rate when council members agreed to approve the proposed rate of 80.59 cents per $100 of taxable value Tuesday evening.

That's a reduction from last year's 80.69 cents per $100, but because the average taxable homestead value in the city rose from $93,643 to $96,614, according to the Orange County Appraisal District, taxpayers of Orange will see their bills go up an average of $20.96.

Ditto for all residents of Orange County. Commissioners backed off a proposed tax rate increase to remain at 54.2 cents per $100 for the fourth year in a row.

But because of rises in home values, taxpayers will see an average increase of $19.10 on that line of their bill.

The "average" bills are based on average taxable homestead values in each taxing jurisdiction. And each jurisdiction offers varying homestead exemptions, not to mention homes of varying market values.

From the market value, all Orange County homeowners get a 20 percent local option homestead exemption off their county and city taxes. Residents of the school districts get an automatic $25,000 state-mandated homestead exemption and folks who live in the Little Cypress-Mauriceville, Orangefield and West Orange-Cove school districts also get a local option exemption of 20 percent off market value in LCM and WOS, 15 percent off in Orangefield.

Bridge City ISD's average taxable homestead values are the highest in the county, at $141,223, while WOCCISD's are the lowest at $40,349. Remember, that's after exemptions.

Also remember, your tax bill is composed of a number of different tax charges by taxing entities.

All will pay Orange County tax, along with smaller tax charges by Orange County Drainage District and a tiny one (6/10ths of a penny per $100 value) to the Orange County Navigation District. Then there's the city tax line for most and another for your school district.

Then, don't forget your emergency services district tax and maybe you pay a water district tax, too.

Residents of West Orange and the WOCCISD are the only ones in the area who will see a decline on a line in their tax bill and that's because there was an actual decline in average taxable homestead values.

The school district reduced its rate a penny and a half and the fall in values meant an average tax payment drop of $14.39 a year. The city kept the same rate as last year and its taxpayers will save a dime on this year's bill.

Changes in state law and accounting forced school districts to lower their rates, yet three Orange County districts had the county's highest average rate hike, because of rising values.