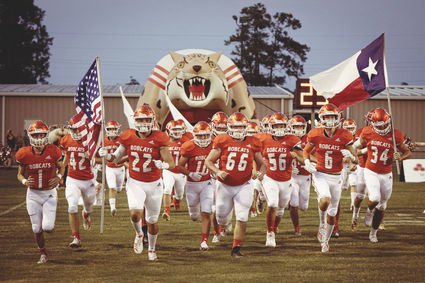 The Orangefield Bobcats take the field to defeat Buna 34-0 in their season opener Friday.

Orange County football fans saw plenty of action Friday as the 2020 high school football season is finally underway despite set backs from Covid-19 and Hurricane Laura. With the excitement of season openers came both elation and heartache with victories by West Orange-Stark and Orangefield while Bridge City and Little Cypress-Mauriceville chalked up losses.

Looking ahead to this week all our local teams will be on the road except Bridger City who will be enjoying a bye week. The Mustangs will travel to take on Hamshire-Fannett, the LCM Bears will be at Houston Kincaid and the Orangefield Bobcats will take a road trip to Silsbee. The Vidor Pirates will be heading to Jasper to face the Jasper Bulldogs.

Most any season, the football game between West Orange-Stark and Newton could be labeled the Battle of the Titans. This year, the Mustangs showed just how huge they're going to be during the 2020 season.

After three games cancelled due to Hurricane Laura, WO-S dominated 70-0 for its first win of the season this past Friday night as the Eagles fell to 0-2 to start the year.

The Mustangs outpaced the Eagles from the beginning, rolling to 442 yards of total offense vs. Newton's 52 yards. The Ponies put on an aerial show for the home crowd at Dan R. Hooks Stadium as Jerren Terrell hit 9 of 13 for 230 yards and three touchdowns, while Jayson Zeigler Jr. hit 2 of 3 for 69 yards and a score.

On the ground Elijah Gales ran six times for 100 yards, his longest a 60-yard TD scamper as he finished with two carries into the end zone. Jamaal Shaw also had a TD run for the Mustangs.

The defense did more than just stifle the typically potent Eagles running game. The Mustangs had two fumble recoveries for touchdowns in the showdown. The Eagles did not attempt a pass against the WO-S secondary with a team-best 34-yard performance coming from DeAnthony Gatson on his 15 carries.

The Mustangs opened the game with a nine play, 76-yard march that ended on a 21-yard pass from Terrell to Jalen Thompson. With the Angel Ibarra kick, WO-S was up 7-0.

Less than two minutes elapsed in the first quarter when Gales took off on a 15-yard TD run and the Ibarra PAT kick made it 14-0 with 2:01 left. On the ensuing kickoff, the Mustangs recovered a Newton fumble and returned it for a 21-0 lead with 19 seconds left in the first quarter.

More of the same came in the second quarter with Terrell hitting Thompson again, this time for a 66-yard touchdown pass for a 28-0 advantage for the Mustangs.

Terrell picked up his third passing touchdown later in the second quarter, hitting Gales this time for a 31-yard gainer and a 35-0 lead at the halftime break.

It took only 18 seconds for the Mustangs to find the end zone to start the second half when Gales took the ball on the first play from scrimmage 60 yards for a 42-0 lead.

The Mustangs defense added another score of its own when Patrick Mickey picked up a Newton fumble at the Eagles' 1 yard line, crossing the goal for a 56-0 advantage.

Zeigler got in on the scoring for the Mustangs, heaving a pass to Demarcus Thibodeaux who did the rest of the work for a 66-yard scoring play and a 63-0 lead. The final touchdown for WO-S came when Newton fumbled again and Jasachin Harris picked up the ball and ran 30 yards for the score and the 70-0 final.

The Mustangs open district play this Friday when they travel to play Hamshire-Fannett at Longhorn Stadium. The Longhorns are 2-1 this season with wins over Anahuac and Splendora. Their sole loss of the year came against cross-county rival East Chambers.

The Cardinals had their chances late in their game at Larry Ward Stadium but it would be Anahuac taking a 28-21 overtime victory as Bridge City continues to look for its first win of the 2020 campaign.

The Cardinals have a bye week this week but will return on October 2 for their first District 11-4A game when they host the Hamshire-Fannett Longhorns.

Leading by a touchdown late, it appeared Anahuac (1-2) had its win wrapped up midway through the fourth quarter. But a dramatic fourth-down stop by the Cardinals defense put the ball back in the hands of the BC offense.

It was a brand new game when Ethan Oceguera found Austin Richardson for a 42-yard touchdown pass with just over a minute left in the game. With Oscar Carranza booting the huge extra point kick successfully, the game was tied at 21-21.

The Cardinals opted to defer after winning the overtime coin toss and it only took Anahuac three plays to score as Christian Sanchez found the end zone from 22 yards out, adding the kick himself for the 28-21 lead.

The Cardinals still had their chance at finding the end zone and it appeared they had found another miracle in their bag of tricks when Oceguera scrambled to find J.T. Fielder in the end zone for the touchdown. The officials snuffed out that fire, though, when they flagged Oceguera for throwing the ball after crossing the line of scrimmage.

Three plays later, on fourth-and-seven, Oceguera hoped the stars would align in his favor once again as he tried a pass over the middle. Anahuac's Zyon Clark went up and came down with the interception to end the game.

The Cardinals started the night's scoring when Oceguera threw a 22-yard pass to Richardson for the 7-0 lead with 7:21 left in the second quarter. Anahuac answered quickly with Landon Corbitt sneaking across the goal line from the 1 for the 7-7 tie.

The Panthers took the lead 14-7 when Corbitt hit Clark for a 30-yard touchdown in the third quarter. They extended that lead to 21-7 when Sanchez crossed from 10 yards out with just under 10 minutes to play.

The Cardinals set up their late-game dramatics with a fourth-quarter touchdown after marching 65 yards on six plays with Oceguera crossing from the 2 yard line for the 21-14 difference with just over six minutes left to play in regulation.

Oceguera completed 11 of 20 passes for 155 yards, adding another 60 yards on 17 carries. Richardson was his favorite aerial target, grabbing three receptions for 78 yards and two touchdowns.

The Orangefield Bobcats picked up their first win of the 2020 campaign by dominating Buna 34-0 in front of the home crowd at F.L. McClain Stadium.

The Bobcats move to 1-1 for the season and get ready to open district play this Friday with a trip to Tigers Stadium in Silsbee. The Tigers, also 1-1 this year, lost to Texarkana Pleasant Grove 46-14 this past Friday night.

Orangefield turned a Tyler Washington interception against Buna into its first scoring opportunity as the Bobcats marched 96 yards in 15 plays with Washington finishing the job from five yards out. The two-point conversion failed and the Cats were up 6-0.

On the next Orangefield possession, the Bobcats rolled 72 yards in just 10 plays with Hunter Ashworth punctuating that effort with a 4-yard TD run. Another failed two-point conversion left the score at 12-0.

Washington was at it again in the Orangefield defensive secondary, grabbing his second interception of the night on the ensuing Buna offensive drive. Two plays later, Ashworth took off again for a 38-yard touchdown. With a successful two-point conversion, the Cats led 20-0 at the halftime break.

The Bobcats scored two more touchdowns in the fourth quarter with Ashworth scoring the first by crossing from the 1 yard line to cap a 64-yard, 10-play drive for a 28-0 advantage. Gunner Jones ended a 36-yard, eight-play drive with a push from the 1 to give the Bobcats their 34-0 final margin.

Orangefield amassed 386 yards of total offense, all coming on the ground, while Buna managed just 75 total yards in the game.

Ashworth led all rushers with 105 yards on 18 carries, while Washington added 87 yards on 13 totes. Clayton Westbrook had 11 carries for 65 yards for Orangefield. Buna's Dylan Graffagnino accounted for 55 total yards of offense, throwing for 13 yards on two completions and running for 42 yards on seven carries.

Little Cypress-Mauriceville was looking for its first win of the season in its first game of the season but instead, came away with a 14-6 heartbreaker to still unbeaten Woodville this past Friday night.

The Bears, who missed their first three games of the season due to Hurricane Laura, travel to Houston this Friday to take on Kinkaid at 7:30 p.m. to try to get in the win column.

The high-octane Woodville offense, which scored 104 points in its first two game, was held in check by the Bears defense as they allowed just two touchdowns.

The Eagles opened the game's scoring in the first half, taking advantage of great field position in Bears territory to move to the 30-yard line. Jack Fowler tossed a touchdown pass to JaCorey Hyder and with the extra-point kick, Woodville led it 7-0 in the second quarter.

The Bears fumbled away their next possession but almost immediately got it back on a Carson Peet interception, returned 50 yards for six points. The PAT kick failed leaving the score 7-6 with just over six minutes left until the halftime break.

The Eagles' run game dominated the final two quarters of play but it was mostly a march inside the 20s for both teams as Woodville only managed to score when Ronald Washington pushed in from the 6 yard line for the 14-6 final margin. 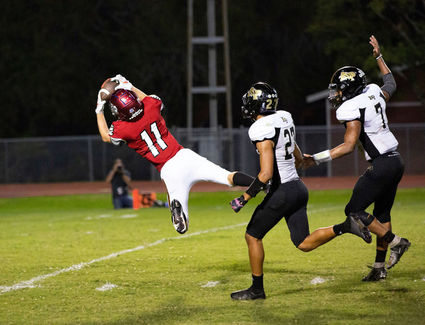