BC man takes on COVID separations 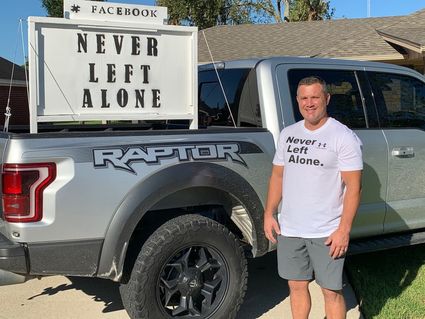 Steven Hilton of Bridge City is leading a march Oct. 10 to bring attention to government rules separating families from the elderly or sick during the COVID-19 pandemic.

A Bridge City man has had it with COVID-19 rules that keep family members away from hospital patients and those in a senior living facility.

"Why the government felt people don't need other people is beyond me," Steven Hilton said.

"This has been going on since February, and what progress have we made? We haven't made any really."

"We are striving to change the current policies dealing with no-visitor rules in hospitals," Hilton said when he started reaching out to others. "No one, even COVID patients, should be left alone in an extremely difficult time. Most of these patients are elderly and the best thing our society has to offer."

Initially, senior living facilities in Washington state and on the East Coast were the hardest hit by COVID-19 infections and deaths when the novel coronavirus and the deadly resulting respiratory disease reached the United States early in 2020.

Relatives were resorting to talking with their loved ones via Facetime video calls.

In mid-September, Abbott amended rules to allow limited visitation at senior living establishments. Each resident is allowed to designate up to two "essential caregivers" who can visit one at a time if they've tested negative in the past 14 days.

"They've loosened up some," Hilton said, "but the rules are extreme. You have to have a COVID test 14 days prior to a visit, and if there's one case of COVID, they don't have to open up.

"Most will be extremely strict, so you can't see your loved one."

Hilton says he was inspired to begin his campaign after the death of an elderly in-law, but he can cite plenty of other cases he's heard where others are torn apart emotionally by the forced separation from their sick relatives.

A case reported on by a Beaumont TV station and cited on Hilton's Facebook page tracks a Hardin County man whose daughter had COVID-19 and was being hospitalized in Houston. His wife was allowed to stay in her room but rules did not allow both parents.

The man reached out to Texas Rep. James White, who appealed to Gov. Abbott and Monday he succeeded in being able to join his wife at their daughter's bedside. 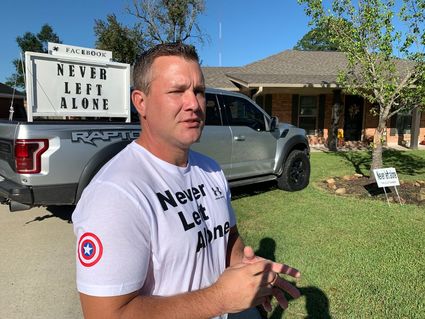 "Lawmakers are hearing us," Hilton said. "I'm so excited. Today was a good day."

The "Never Left Alone" walk will be a short loop from the Medical Center of Southeast Texas parking lot to the Bonne Vie assisted living center and back on Saturday, Oct. 10.

"There have been some positive changes," Hilton said, "but they are still on a case by case basis. It's a step in the right direction, but we need to get this thing standardized.

"I really think this walk will do a lot. Maybe Abbott will change his whole corona rule. I don't know what's going on with that man. Florida is way ahead of us."