Astros are playing better after backing into playoffs 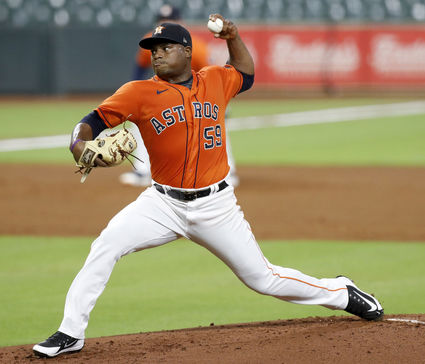 Have you ever heard of a World Series champion that had a losing record in the regular season?

How about a major league baseball team getting into the post-season with a losing record?

The answer to those two questions should be no!!

What I'm getting at is that our feeble Houston Astros played yesterday afternoon at Minnesota against the Twins in the first game of the 2020 best-of-three Wild Card Series against the team that won the American League Central Division pennant.

It spells bad news for Houston which limped into the playoffs with a 29-31 record as the AL West runner-up after the Los Angeles Angels lost a 9-5 decision to the LA Dodgers Friday night and were eliminated from the second-place position.

Houston exploded for 3 runs in the top of the 9th inning Tuesday snapping a 1-1 tie. Framber Valdez, who relieved starter Zach Greinke in the 6th inning, was the winning pitcher.

Astros could very well have been eliminated this afternoon, but if past performances have anything to do with this year's playoffs, then it must be pointed out that the Twins have reached the post-season in 2019, 2017, 2010, 2009 and 2006 and the last time they even won a single playoff game was in 2004. That trend continues into game 2 today.

The Astros could easily match Minnesota's playoff record and look like a team that's ready for another World Series shot. However, that's not the way it works.

Last week all the media could headline is a playoff match between the Astros and the AL West Division-champion Oakland A's.

But the A's 6-2 win over the Seattle Mariners on Sunday's final day of the season combined with Minnesota's 5-3 loss in 10 innings to the Cincinnati Reds moved Oakland up one spot in the eight-team American League playoff bracket and bumped the Twins into the third seed to face the sixth-seeded Astros in the best-of-three wild card series.

"The Astros are the first Major League baseball team, along with the Milwaukee Brewers in the National League, to qualify for the post-season with a sub-.500 record," according to an article appearing in Monday's edition of the Houston Chronicle.

Houston entered yesterday's opening game of the Wild Card Series with three consecutive losses to the pathetic Texas Rangers, including Sunday's game where they squandered a 3-1 lead.

The bullpen really struggled in the season's last couple of weeks because of an impotent offense's ability to come through with men in scoring position, especially in the later innings.

Although some of the Astros' playoff veterans like George Springer, Carlos Correa, Jose Altuve and Josh Reddick are full of confidence about the playoffs, the Astros hardly entered the playoffs on a roll.

"It hasn't been good," first-year manager Dusty Baker told the Chronicle. "We've got to clean up these mistakes. These guys have been there before and they know what's at stake. They know not to panic. They know what to do in certain situations."

One of the brighter offensive stars for Houston is outfielder Michael Brantley, who finished the season at .300 and didn't dip under that mark throughout the 60 games.

Rookie left-handed pitcher Framber Valdez (5-3) or Jose Urquidy (1-1) were set to pitch in today's second game of the series that starts at noon on ESPN2 after high-dollar veteran Zack Greinke took the hill in yesterday's game.

If a third game is necessary, Baker plans to send out Lance McCullers, Jr. in the rubber game Thursday on either ESPN or TBS with a starting time to be determined.

KWICKIES...For the third week in a row the Houston Chronicle gave the Houston Texans an overall grade of "F" in their 28-21 loss to the Pittsburgh Steelers on Sunday. The running backs, who were able to manage only 29 total rushing yards, were awarded an F-minus, the same grade the offensive line received. The coaches garnered their third-straight F grade.

This week's Associated Press Top 25 College Football Poll still has Clemson on top, with Alabama a close No. 2 again this week. Florida jumped from No, 5 to third, Georgia remained No. 4, Notre Dame moved up two spots to No. 5, idle Ohio State stayed at No. 6, Auburn went up one to No. 7, Miami catapulted from No. 12 to eighth, Texas fell one to No. 9 and idle Penn State remained at No. 10. Texas A&M dropped from tenth to No. 13 while LSU nosedived from No. 6 to No. 20 and Oklahoma sunk from No. 3 to No. 18.

After kicking the game-winning 46-yard field goal to beat Atlanta 40-30 a week ago, Dallas Cowboy kicker Greg Zuerline was dubbed "Greg The Leg" by his teammates. Then Zuerline turns around and misses an extra point Sunday at Seattle.

And speaking of the Atlanta Falcons blowing fourth-period leads of 15 or more points, they did it again Sunday when the Chicago Bears came back from a 16-point deficit to down the 0-3 Falcons 30-26. Atlanta became the first team in NFL history to lose back-to-back games in which it led by 15 or more points in the final period, according to STATS.

The surprising Tennessee Titans have won all three of their games by a meager total of six points, thanks to veteran kicker Stephen Gostowski who booted game-winning field goals in all three games.

Due to a missed extra point and a safety, the 23-15 halftime score that the Seattle Seahawks led over the Dallas Cowboys Sunday was the first time in NFL history that any game had that score at the intermission.

JUST BETWEEN US...After three weeks, Texas and New York City have the same dilemma as far as the National Football League is concerned. Neither the Giants or Jets have yet to crack the victory column while the winless Houston Texans and the Dallas Cowboys have similar woes, although the Cowboys did come up with a miracle victory against Atlanta. The Texans jumped off to a 21-17 first-half lead over the Pittsburgh Steelers until the NRG Stadium visitors discovered that Houston could not stop their running game and turned that halftime deficit into an impressive 28-21 win that wasn't nearly as close as the final score indicated. Pittsburgh had a first-and-goal at Houston's one-yard line at the two-minute warning and decided to go into the victory formation on the next three snaps to run out the clock. The Cowboys' defense just couldn't stop Seattle quarterback Russell Wilson, who burned them for 315 passing yards and five touchdowns in a 38-31 win. Wilson leads the league with 13 touchdown passes in 3 games. Dallas quarterback Dak Prescott threw for 472 yards and three touchdowns but had two crucial interceptions.