WOS, BC poised for Friday bouts 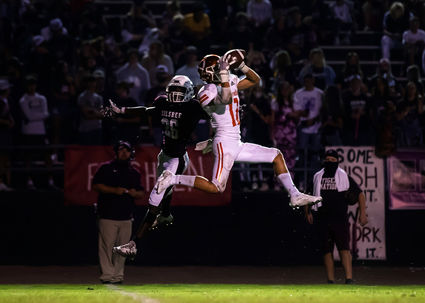 Orangefield Bobcat Tyler Shearin is airborn pulling down a pass against Silsbee.

A big win for West Orange-Stark, a disappointing second half for Little Cypress-Mauriceville and a close game for Orangefield marked this past Friday nights high school football games for Orange County.

The Mustangs rolled against Hamshire-Fannett for a 37-7 win on the road, while LC-M let a 20-0 first-half lead slip away in a 42-26 loss to Houston Kinkaid. Orangefield nearly upended Silsbee as the Tigers celebrated homecoming with the Bobcats falling 14-6 in the District 11-4A, Division II opener.

HAMSHIRE – Quarterback Jerren Terrell had another huge night, throwing for 212 yards and two touchdowns to lead the Mustangs past the Longhorns 37-7 at Longhorns Stadium.

Terrell completed 12 of 26 attempts with no interceptions and added another 19 yards on four carries as the Mustangs improved to 2-0 overall and 1-0 in District 11-4A, Division II play.

The Mustangs opened their scoring with an Angel Ibarra field goal from 24 yards out, capping a 59-yard, nine-play drive.

WO-S upped that lead to 10-0 in the first quarter when Terrell hit Jacob Dominguez for a 15-yard TD strike. Ibarra's extra point kick was good.

The second quarter showed more of the same from the Mustangs when Ibarra booted a 25-yard field goal for a 13-0 advantage.

Whatever the H-F coach said during the halftime break worked well with the Longhorns coming out to score on an 89-yard touchdown pass to cut the WO-S lead to 13-7.

That was all the Longhorns could muster on offense, though, as the Ponies added another 20 points through the rest of the third and the fourth quarters.

Terrell found Jalen Thompson and he did the rest of the work on a 42-yard scoring pass play to end the third quarter with WO-S up 30-7.

Jallen Brown picked up a touchdown for himself and the Mustangs when he took off on a 25-yard jaunt and a 37-7 final.

Elijah Gales led the rushing game with 10 carries for 138 yards, his longest a 39-yard run, while Brown added 40 yards on three carries. Zeigler was Terrell's favorite aerial target, hauling in five catches for 77 yards, while Jerrold Brown Jr. had two catches for 65 yards, including a 56-yard catch-and-run.

Ibarra single-handedly scored 13 points kicking for the Mustangs, also adding one punt for 45 yards that pushed the Longhorns back inside their own 20 yard line.

The Mustangs are back at Dan R. Hooks Stadium this Friday when they take on district foe Hardin-Jefferson at 7:30 p.m. The Hawks beat Liberty 26-21 this past Friday night in their district-opener.

SILSBEE – A quick score and a little trickery helped put Silsbee up early and the Orangefield Bobcats just weren't able to catch up as they fell 14-6 this past Friday night.

The Tigers, now 2-1 overall and 1-0 in District 11-4A, Division II play, wouldn't take long to find the scoreboard for their homecoming crowd as Marquis Dodd took off for a 62-yard touchdown to give Silsbee a quick 7-0 lead.

An unlikely onside kick attempt by Silsbee was good when kicker Diego Carreon Gonzalez recovered his own kick to put the Tigers at the Orangefield 46-yard line. Silsbee ended a five-play drive with a 27-yard run by Raymond Baltrip as the Tigers went up 14-0.

The Bobcats came back in the second half, taking 10 minutes off the game clock in a tedious but successful 64-yard, 17-play drive that was capped by Hunter Ashworth's 3-yard touchdown run. A two-point conversion failed, leaving the Bobcats trailing 14-6.

The Orangefield defense had some great highlights with Tyler Shearin and Tyler Washington each hauling in an interception against Silsbee quarterback Mason Brisbane.

The Bobcats get this Friday off for a bye week with a return to the field on October 9 for a district home game against Liberty.

HOUSTON – Little Cypress-Mauriceville went up early against Houston Kinkaid but couldn't hold on as the Falcons got away with a 42-26 non-district game in Houston this past Friday night.

The Bears fall to 0-2 for the season with their final non-district game coming at home against the Jasper Bulldogs this Friday night with a 7:30 p.m. kickoff.

With the reputation of having a potent offense of its own, it was no surprise that Kinkaid took off on a march of its own with its first possession. LC-M's Nicholas Granger had other ideas though as the defensive back picked off the Kinkaid QB and took it 65 yards for the touchdown and a 14-0 advantage.

The Bear recovered the ensuing kick at the Falcons' 36-yard line and it would only take a handful of plays before LC-M was in the end zone again, this time on a 35-yard Landry run. The PAT kick was blocked, leaving the game at 20-0.

Unfortunately, the Bears wouldn't see the end zone again until the fourth quarter but by then, the Falcons had reeled off 42 unanswered points for a 42-20 advantage.

Da'Marion Morris set up the Bears for their final touchdown of the game after returning a kickoff 83 yards to the Falcons' 12-yard line. It took a fourth-down effort by the Bears but Landry found Granger in the end zone for the score. A failed two-point conversion allowed for the 42-26 final.

Win or lose, Landry certainly deserved a game ball after completing 10 of 23 passes for 104 yards and two touchdowns, adding another team-leading 80 yards and a TD on 18 carries.

Senior receiver Pollock had three catches for 41 yards and a touchdown, while Granger grabbed two passes for 40 yards and a score. 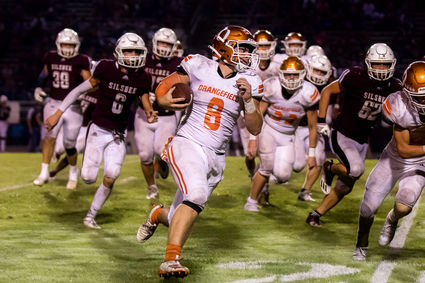 Morris had 48 yards on seven carries and Andrew McDown chipped in 44 yards on 16 carries for the Bears.

Kinkaid quarterback Louis Gustafson completed 16 of 23 yards for 255 yards and three touchdowns. His favorite target was Dillon Bell, who finished with seven catches for 90 yards and a TD. Spencer Olsson led the Falcons' rushing game with 87 yards and a TD on 14 carries.

Granger led the LC-M defense with seven tackles, five of those solo efforts, while sophomore Dean Reynolds helped with five tackles, including one for a loss. Brandyn LeBouef, Morris and Ezavier Smith each added four tackles for the Bears. Amier Washington and Eric Garcia each managed to get through the Falcons line to record a sack in the game.

Smith, Granger and Jermaine Woodson each had an interception, while Morris had a fumble recovery for LC-M.