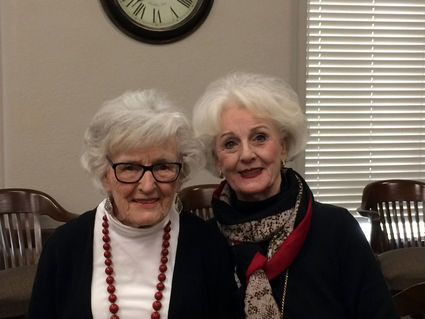 Orange County's first and for-a-long-while only mother and daughter team of county commissioners have a date Sunday, Oct. 11.

"My grandson, Brad Beauchamp, is cooking my birthday dinner," bragged the woman who twice beat three opponents in elections and served Orange County from 1987-94 as its first female commissioner.

"Beaumont still has never had a female commissioner," she said, referring to Jefferson County.

Theresa Beauchamp, daughter of Marcelle and her late husband Al, is Orange's third female commissioner. She and her husband, Frank, are driving to their son's home for the birthday party.

"She just got her driver's license renewed two weeks ago," Beauchamp says of her mother. "The man said, Ms. Adams, I'll see you in two years to renew it again.

"Can you believe that?"

"All my old friends who used to play bridge with me are dead, but now I've got new friends with the generation beneath those.

"I play bridge one or two times a week and go to Sunday school every week. I have a lot of fun."

Marcel Adams moved to Orange in 1941 so her dad could work in the shipyard. She was just out of high school and soon met her husband, to whom she was married for 57 years.

"When I was four my mother went to work in the lab at DuPont," Beauchamp said. "That was something women didn't do.

"She's a blessing, and I'm so fortunate that she's still here. She has been a role model for me all my life. I was the only child and had a wonderful mother and dad."

Speaking of Theresa, a former school administrator who served 11 years on the Orange city council, Marcelle's eyes twinkle when asked to appraise the job she's doing for the county.

"You know better than to ask a mother," she prefaced her remarks. "I think she's really doing good, I really do. She answers the calls and goes out and helps the people any way she can."

Reversing the question, Beauchamp marveled at her mom.

Religion is important, Marcelle Adams said she prepared to celebrate the 97th anniversary of her birth.

"My key to growing old is to put God first," she said. "Have a lot of friends, and stay active. Don't sit around waiting to die."