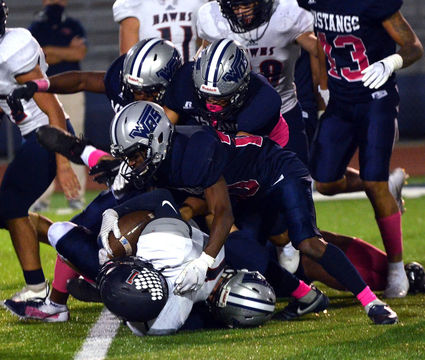 Mustangs Demetriuis Hunter, Bryson Jordan and Marquarius Garrett tackle the Hawk running back in the Mustangs 47-7 win over Hardin Jefferson.

The Bridge City Cardinals picked up their first win of the season, Little Cypress-Mauriceville is still looking for its first victory, and West Orange-Stark just keeps on winning as the most recent week of high school football play is in the books.

The Cardinals, now 1-1 overall, is undefeated in District 11-4A, Division II play after topping Hamshire-Fannett 27-20 in Bridge City. The Bears, now 0-3, fell to Jasper 35-0 but the Mustangs moved to 2-0 with a 47-7 win over Hardin-Jefferson this past Friday night. Orangefield enjoyed a much-needed week off but comes back this Friday night with a game against Liberty where the Bobcats try to claim their first district win of the year.

Bridge City will take on Hardin-Jefferson this Friday night at 7:30 p.m., the Mustangs travel to Silsbee for a 7:30 p.m. kickoff, while LC-M hosts Huffman-Hargraves in a 7 p.m. game.

After the second week of play, District 11-4A, Division II has a three-way tie at the top of the heap with West Orange-Stark, Silsbee and Bridge City sharing the lead.

Should Bridge City maintain its ability to win in district, that could set up a battle for first place between the Cardinals and Mustangs with that meeting coming the final week of the regular season, November 6, in West Orange.

As a team, WO-S leads the district in both offense with an average of 445 yards total offense, and in defense, allowing just 115 yards of total offense to its opponents.

Individually, it is Hamshire-Fannett's D'onte Zeno who leads the passing attack with 715 yards and three touchdowns, hitting 43 of 72 passes for the Longhorns. Mustang Jerren Terrell, ranked second this week in the district, has completed 32 of 61 passes for 589 yards, leading the district in touchdown passes with seven all the while allowing no interceptions.

In five games, Liberty's Alijah Terrell and Hamshire-Fannett's Khegian Heckaman are neck-and-neck in the rushing game with Alijah Terrell taking the edge with 417 yards on 62 carries with three TDs. Heckaman leads the district with eight rushing touchdowns, picking up 413 yards on 75 carries.

Mustang Elijah Gales is third in rushing after just three games, picking up 336 yards on 25 carries with four touchdowns. He is the only running back in the district averaging triple-digits with 112 yards per game so far this year.

Silsbee's Quincy Kelly Jr. leads the district in receiving with 11 catches for 95 yards and two touchdowns. Mustang Jayson Zeigler Jr. does more once he gets the ball, though, picking up 142 yards on just nine catches.

Orangefield's Tyler Washington is among the best defensive secondary players in the region, grabbing four interceptions for the Bobcats to lead District 11-4A, Division II so far.

The Mustangs stayed perfect in district play after taking the Hardin-Jefferson Hawks to school in a 47-7 whipping at Dan R. Hooks Stadium this past Friday night.

In spite of the final outcome, it looked like the Hawks would make a game of it after going up 7-0 with just a minute off the game clock. Dakota McNair scored on a one-yard TD run, taking advantage of a Mustangs fumble.

The Ponies answered quickly when Elijah Gales found the end zone on the next offensive possession, going nine yards for the score to tie the game at 7-7 with 7:02 left in the first half.

The two teams took an unlikely tie game into the locker room at half but it wouldn't be long before the Mustangs opened up their offense to take the lead.

It took just under a minute for the Mustangs to march to the 21 yard line when Zeigler Jr. took off with a  21-yard TD run to give WO-S a 14-7 lead.

On the ensuing drive, the Mustangs recovered a fumble, leading to an eventual 21-7 lead when Terrell ran 7 yards for the score.

The WO-S defense continued its dominance, pushing the Hawks into their own end zone for a punt attempt that turned into a safety and a 23-7 advantage with eight minutes left in the quarter.

Terrell and Thompson accounted for the next touchdown with a pass-and-catch connection from 15 yards out, giving the Mustangs a 30-7 lead.

Yet another forced fumble gave the Mustangs possession again deep inside Hawks territory. Gales pushed it across from 17 yards out for the 37-7 advantage, still in the third quarter.

Angel Ibarra, who leads the district in points scored by a kicker with 32 so far this season, booted a 30-yarder to give the Mustangs a 40-7 lead with a minute gone in the fourth quarter.

The final score came on a Terrell aerial connection with Demarcus Thibodeaux for 15 yards, leaving the Hawks wondering what the heck happened as the Mustangs walked away with the 47-7 win.

Terrell finished the night with 134 yards passing, his favorite receiver being Thompson with four catches for 57 yards. Gales finished the game with 100 yards on nine carries, while Jamal Shaw added 93 yards on eight carries.

Bridge City escaped with a 27-20 district win over Hamshire-Fannett thanks to an opportunistic offense and an overpowering defensive effort this past Friday night.

The Longhorns, now 2-3 overall and 0-2 in league play, scored first when quarterback Kheagian Heckaman found the end zone for a 7-0 lead.

Bridge City quickly answered with a 76-yard drive that ended with quarterback Ethan Oceguera crossing the goal line from the four for a 7-7 tie.

The Cardinals would go up 14-7 thanks to Harrison Gauthier who picked off the H-F quarterback for a 30-yard touchdown return.

Bridge City managed another touchdown in the first half, this one coming with just under a minute remaining, as Austin Richardson hauled in an Oceguera pass for a 21-7 lead heading into the locker room.

At the start of the second half, the H-F defense stiffened and the Cards punted away possession. The Longhorns mishandled the punt and Julian Dillow gave BC possession again at the Horns 26.

Unable to push it into the end zone, Oscar Carranza booted a 37-yard field goal for a 24-7 lead for the Cardinals.

The Longhorns added a TD when Jordan Joiner scored from the 21 to pull H-F to within 24-13 after a missed extra-point kick attempt.

Bridge City would respond with another score early in the fourth quarter when Carranza hit his second field goal of the night for a 27-13 Cardinals lead.

With less than two minutes to go, H-F still held on to some life when Heckaman scored on a 3-yard run to pull the game to within a score at 27-20. The onside kick attempt failed and the Cardinals left with a victory.

Too much Jasper offense and too many turnovers by the Bears spelled doom in a 35-0 non-district loss for Little Cypress-Mauriceville this past Friday night at Bears Stadium.

The Bulldogs allowed just 174 yards of total offense while the Bears, still winless this season at 0-3, allowed 504 yards total offense by Jasper. 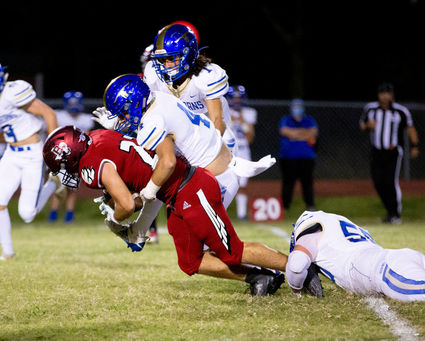 Two early turnovers helped the Bulldogs take an early 14-0 lead when Andre Thomas scored twice on runs of 34 and 33 yards. He also had two interceptions on defense for the Dogs.

The Dogs pushed their lead to 35-0 on a touchdown pass from Trashawn Adams to Micah Pickering for 81 yards in the third quarter.

Limbrick had 181 yards on 16 carries while Thomas finished with 141 yards on eight carries. Adams finished the game 7 of 11 for 111 yards passing.

Ashton Landry kept thing respectable with a 12-of-24 performance for 101 yards passing with Brendon Pollock catching the ball eight times for 75 yards. Andy McDow did his best but managed just 47 yards on 11 carries for the Bears.