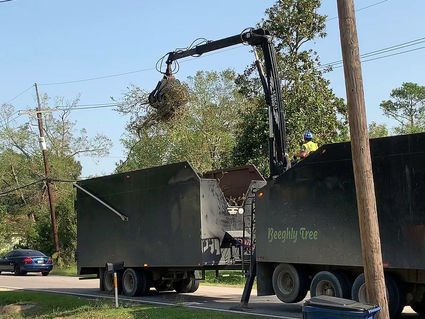 Contracted haulers are prowling Orange County streets to pick up the last of an estimated 800,000 cubic yards of debris left by Hurricane Laura in late August.

Here's a note for anyone in Orange County that had double damage from back-to-back Hurricanes Laura and Delta.

If you have debris to bring to the edge of the road for pickup by the county's debris haulers, be sure to keep the Laura junk separated from the Delta stuff.

And don't forget, your debris from each storm is to be sorted in four piles: one for construction and demolition materials; one for green waste -- tree limbs, etc.; one for white goods – household appliances; and another for hazardous waste.

The county expects to be reimbursed by FEMA for about $7 million being spent to remove some 800,000 cubic yards of hurricane debris left by Laura, which struck locally on Aug. 27 with at least one gust measured at 104 mph, Gothia reported after the storm.

Delta blew through Orange County Friday, Oct. 9, and like Laura, did its worst damage in western Louisiana.

Gothia said the highest winds he had seen reported in the county from Delta were in the mid-80s. And damage was relatively light.

"In all our riding around and from reports, there's not enough out there to do it," Gothia said of hiring debris haulers just to clean up after Delta.

Gothia said under current FEMA guidelines for Texas entities to be eligible for federal "public assistance" reimbursement, there must be at least $39 million in damage statewide.

"We're not close," the judge said.

Only President Donald Trump could make the decision to allow hurricane recovery efforts from Laura and Delta to be combined for the purpose of reimbursement.

"There's some discussion that he's having about whether he wants to combine the two but that's up to him. We haven't seen anything from him. Until we do, we've got to operate on the fact that we, for sure, are going to be paying for that one on its own," Gothia said.

So separate stacks it is for Laura and Delta.

"We've got to do our best to keep the debris separate," the judge said. "We can't risk getting paid the $7 million from Laura."

Original estimates of debris from Laura was 300,000 cubic yards.

Joel Ardoin, emergency management coordinator for the county, said at Tuesday's meeting of commissioners court that 532,000 cubic yards had been picked up and hauled to two county sites and 260,000 cubic yards remained.

"We only have a month to wrap up this debris mission," Ardoin said. "We need everyone to know a deadline is looming to set Laura debris out for pickup."

Exactly what that deadline was kicked until the commissioners' next meeting, Tuesday, Oct. 27.

The county's disaster declaration for Hurricane Laura could be extended at that meeting; it is otherwise set to expire Oct. 30.

Commissioners voted to extend the disaster declaration for Hurricane Delta through Oct. 27.

Also commissioners must decide Oct. 27 on extending free five-day-per-week access to the county landfill. They voted Tuesday to keep it free and operating from 7 a.m. to 6 p.m. Tuesdays through Saturdays until Oct. 27. They also waived building permit fees related to hurricane damage through Oct. 27.

Gothia said he had done all he could do toward following the governor's recent decree to allow bars to reopen with 50 percent capacity as of Wednesday, Oct. 14.

He said Tuesday he was waiting to hear back from the Texas Alcoholic Beverage Commission for the OK.

"I'm sent in [the paperwork] and I'm just waiting to hear it's been approved by TABC," he said.

"We want them open. But we want to be sure they do it correctly. They must follow GA 32, Governor's order 32 on how they operate their bars, or the TABC will shut them down."