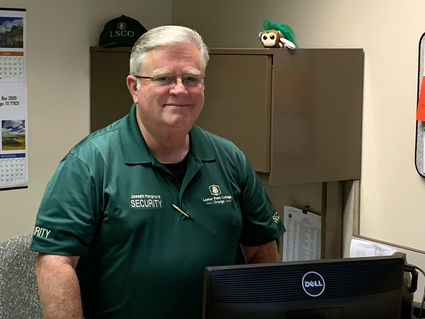 Talk about hitting the ground running.

Joey Hargrave took over as Safety and Security Coordinator at Lamar State College Orange in the middle of the 2020 coronavirus pandemic, then saw his new campus hit by back to back hurricanes.

"It's been busy," Hargrave, a lifelong Bridge City native, said Tuesday, being careful to avoid the two overturned trees across the sidewalk not far from his office door.

"But working for the school means we get to spend our time helping people who are good people," he said. "We're not dealing with crime day to day."

Along with his Safety and Security responsibilities, Hargrave will serve as the school's Lead Title IX Investigator.

Twice, he was named Orange County Law Enforcement Officer of the Year.

Looking for a different way to give back to his community, he went to LSCO's nursing school and spent a couple of years working as an LVN at the Medical Center of Southeast Texas.

Then former Orange County Sheriff Keith Merritt called him back to law enforcement to help with the technology side of the job.

"They needed someone with administrative experience that was familiar with computer software," he said.

At the Sheriff's Office, Hargrave ranked as a lieutenant and said he worked on the transition to Spillman Law Enforcement software and was responsible for the OCSO camera system, which included deputies' body cameras and dashboard cameras.

"At the city [Bridge City] over the years, being small we had to wear a lot of hats, and we installed several [computer] systems, sort of learning as you go."

Hargrave mentions his wife, Ramona, has run a computer-based business, a medical transcription company, for 20 years.

Hargrave moved to LSCO in the Sheriff's Office transition as Lane Mooney replaced a retiring Merritt as Sheriff.

He brings a Master Certification as a Peace Officer and a Law Enforcement Instructor's License.

"It's a different world we live in nowadays," he said.

One of his first orders of business for the college is updating radio communication systems and security cameras.

"Safety and security is what I do here," Hargrave said. "We have nine or 10 buildings and we keep up with burglary and fire alarms, make sure the students are safe.

"There's an emergency phone in each building that automatically rings the phone to the security office. We help folks who have locked their keys in their car, jump batteries and unlock doors when employees forgot their keys."

LSCO's security guard staff is made up of retired policemen.

"Not a whole lot happens here that we haven't encountered."

Besides being a one-time student at LSCO, Hargrave has also served for several years as an adjunct instructor in the LSCO Criminal Justice program. He works with students during their internships with law enforcement agencies. 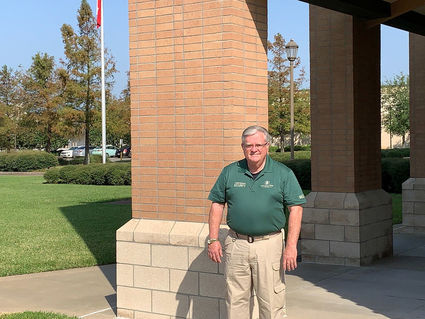 "It's a pretty good program," he said. "Like anything else, you can only learn so much out of a book.

"I learned a lot about law enforcement in school at the Lamar Police Academy but I didn't learn how to be a police officer until I got into the car with someone who had been doing the job."

Another product of both police departments and two-year colleges is LSCO President Tom Johnson.

"Dr. Johnson's a go-getter who doesn't slow down. He sets a good example for others to follow.

"Lamar State College Orange has always been a great institution and I have continued to watch it grow and succeed since I first stepped foot here in 1980. I am thrilled and excited to be here."