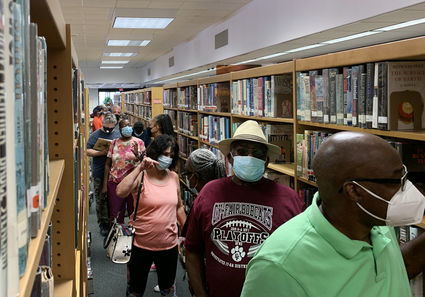 Voters line up between the bookshelves at the Orange Public Library to await their chance to cast their early voting ballots in the Nov. 3 general election Tuesday, the first day of an early voting period that runs through Oct. 30.

The final number wasn't released to the public until Wednesday morning, but it confirmed what everyone was saying about the first day of early voting in Orange County -- that it drew a record-setting number of citizens to the polls.

"We had a record turnout for the first day of early voting in Orange County," David Covey, county chairman for the Republican Party, correctly predicted Tuesday evening.

The 3,210 voters nearly equal 10 percent of the record 32,294 who voted during the 2016 election, the last Presidential vote. And nearly three full weeks of early voting before the official 2020 election day, Nov. 3.

"Of course, this was the first time they ever had a third week [of early voting]," Covey said while excited about Tuesday's turnout.

Texas Gov. Greg Abbott, a Republican, approved an extra week of early voting back in the spring when he was following President Donald Trump's orders to shut down the state's schools and non-essential workplaces because of the COVID-19 pandemic.

Members of his own party unsuccessfully brought suit to strip away that third week now that Texas is following Trump's orders to reopen the state.

According to Elections Administrator Tina Barrow, Orange County set a record for voting turnout with 32,294 voters in the election of November, 2016, when Trump was elected president.

"I don't know how many we have had," Barrow said at 5 p.m. Tuesday, "but the lines are pretty long. It's pretty energizing. I like to see everybody out."

All four had long lines Tuesday when the polls opened at 7 a.m. and again at midday. At the library and Expo Center, those waiting to vote could queue up inside air-conditioned buildings while the lines extended out the doors at both the Airport terminal meeting room and Gould Center, smaller buildings.

At the library in downtown Orange, the line to vote serpentined through several rows of bookshelves and chalk marks on the floor indicated much more space inside was available.

At 2 p.m. at the library, a woman reported she had been in line an hour and she still had 30 or so people in line between her and the door to the community meeting room where voting booths were set up.

At the Expo Center at 1 p.m., a husband and wife debated if it had taken them 20 or 30 minutes in line before they were able to vote.

"It surprised me it moved as quick as it did; it was nice," said Douglas Harrison, a newcomer to Orange County.

"It's my first time voting here. We moved here from Houston and it was extremely fast, from where I'm concerned. They have managed it very well."

The city of Orange's city attorney, Smith was busy for an hour or so at the city council meeting held at the council chambers next door to the library.

Covey said he spent some of his day at the Expo Center.

"I was in the parking lot holding a Trump sign," he said, "and everybody came out and gave me a thumbs up. People said they'd been waiting to vote for a long time."

A problem with mail-in votes has already happened in Orange County, Covey revealed, though hardly the voter fraud that Republicans in Washington and Austin had predicted.

In Orange, the culprit was Hurricane Delta, the storm that blew through last Friday afternoon with wind gusts of up to 100 mph.

"They delivered the mail with the ballots in it Friday, right before the hurricane came in," Covey said. "I've talked to several dozen people who had their ballots soaked by the storm before they could get to the mailbox to bring them in.

"All they have to do is bring what's left of their ballots to the Elections Administration office and they'll take care of it."

One caller to The Record Tuesday night said he hadn't been out of his home for three months because of COVID fears and high-risk medical problems and wasn't planning to break that streak if at all possible.

"I've been voting since 1952, and it's not like I'm trying to do something wrong," he said. "It doesn't make any sense. It seems like they're trying to make it harder for all people to vote." 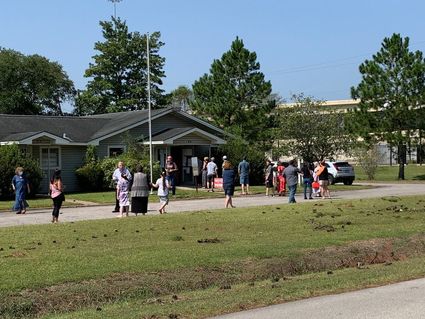 Voters line up outside the Raymond Gould Civic Center in Vidor for early voting.

Mail-in ballots (previously called absentee ballots but now available to all voters 65 and older who request them) went out later than normal this year because of legal challenges to a 2017 Texas law that eliminated straight-ticket voting beginning this year.

Barrow was interviewed Tuesday before the issue of the hurricane-swept ballots reached The Record and could not be reached for comment afterward.

"We haven't had any big problems, just small things," she said at 5 p.m.

She allowed that legal challenges to the conduct of the election plus the needs brought on by more early voting days and the fact that some veteran poll judges and workers had opted out this year because of COVID concerns made her job "very tiring. But we'll get through it," she said.

And Barrow added the big turnout has its pluses.

"More people voting makes the day go faster for the people working at the voting locations," she said.