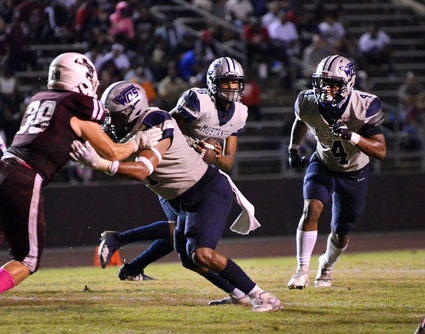 Mustang Bryson Jordan blocks for quarterback Jerren Terrell as he looks for an open receiver. Terrell finished the game with 175 passing yards and 3 touchdowns.

Week Seven of this crazy 2020 high school football season is in the books and what is likely the least crazy scenario is playing itself out as West Orange-Stark continued its unbeaten streak to three games in District 11-4A, Division II play with a win over Silsbee this past Friday night.

In fact, the Mustangs and Orangefield were the only Orange County team to escape with a win this past Friday with WO-S taking a 35-34 decision over the Tigers and the Bobcats edging Liberty 14-6.

Bridge City lost a 35-34 heartbreaker to Hardin-Jefferson and Little Cypress-Mauriceville stays winless this season after falling to Huffman Hargrave 14-10.

Week Four of the district season sees cross-county rivals Orangefield and West Orange-Stark teeing it up at Dan R. Hooks Stadium in West Orange this Friday, while Silsbee travels to Bridge City. Hardin-Jefferson visits Chambers County to take on Hamshire-Fannett and Liberty gets a bye week to try to figure out how to haul themselves out of the district cellar.

The Mustangs are still the team to beat after improving their record to 3-0 in district play while Silsbee and Hardin-Jefferson are now battling to keep pace with both teams at 2-1 in league play.

How are the Mustangs doing it? With dominance on both sides of the ball. WO-S leads the district with an average of 425 yards of total offense while allowing just 121 yards of offense to its opponents so far this season.

In spite of its 1-2 won-loss record in district, the Bridge City Cardinals are getting it done on offense, averaging a second-best 337 yards of offense, while Orangefield is the second-best defense in the league right now, allowing 158 yards of offense to its opponents.

Mustang quarterback Jerren Terrell owns first place in the passing category, completing 40 of 84 passes for 764 yards and 10 touchdowns so far this year. His top receiver, Jalen Thompson, is second in the district with 11 catches for 301 yards. That would be the most yards receiving in the district were it not for his teammate Jayson Zeigler Jr. also hauling in 301 yards receiving on 11 catchges, making the Mustang duo the most dangerous in the region.

Silsbee's Raymond Baltrip edges the Mustangs duo with one more catch at 12 for 152 yards, while Hamshire-Fannett QB D'onte Zeno is second in passing with 43 completions on 72 attempts for 715 yards and three touchdowns.

Hardin-Jefferson's Jaiden Porter leads the district in rushing with 443 yards on 69 carries with nine touchdowns, while Liberty's Alijah Terrell has 62 carries for 417 yards and three TDs. Orangefield's Hunter Ashworth is currently fourth in rushing in the district, carrying the ball 68 times for 361 yards and four touchdowns, while WO-S rusher Elijah Gales is fifth with 27 carries for 334 yards and four TDs.

Tyler Washington of Orangefield is still the interceptions leader with four picks this season, followed by Silsbee's Kevin Martin's three.

Mustang Angel Ibarra is the top-scoring kicker in the league with 36 total points off 24 extra-point kicksd and four field goals.

It was a no-doubt statement about who can dominated District 11-4A, Division II when the Mustangs walked to a 36-6 win over Silsbee this past Friday night at Tigers Stadium.

The Mustangs got off to a quick start, scoring on a three-yard touchdown to cap a five-play, 55-yard drive with 3:12 left in the first quarter.

It appeared the Tigers would make a game of it when they matched that score with one of their own when Camron Wilson hauled in a 30-yard TD pass to tie the game at 6-6 with 10:00 left in the first half.

That's when the Mustangs decided enough was enough, picking up a couple of points with 4:41 left to the halftime break with a safety to give WO-S an 8-2 lead.

Jerren Terrell hit Jalen Thompson for a 32-yard touchdown pass with 2:44 left in the second quarter, then Terrell found Jallen Brown on a 19-yard pass completion to put the Mustangs in the driver's seat at 22-6 headed into the break.

The Ponies added two more touchdowns in the third quarter when Jamaal Shaw broke loose and went 53 yards for a rushing touchdown just 16 seconds into the second half. Terrell and Thompson hooked up again, this time for a big 48-yard strike for a touchdown, capping a four-play, 59-yard drive for the 36-6 final.

Terrell completed 8 of 23 passes for 175 yards and three TDs with no interceptions, while Thompson led all receivers with 84 yards on three catches and two scores. Jallen Brown and Jacob Dominguez each had 43 yards receiving.

Jayson Zeigler Jr. got the job done in the backfield, rushing for 93 yards on six carries with a score, while teammate Jamaal Shaw added 80 yards and a TD on seven carries.

The TIgers' best offensive performance came from Antonius Arline who had 22 carries for 71 yards, while quarterback Raymond Foster completed 6 of 19 passes for 80 yards and a TD.

It appeared that Little Cypress-Mauriceville had finally found the answer to claiming its first win of the season, in the district-opener no less, taking the undefeated Huffman Falcons to the wire this past Thursday night.

But it was Huffman that walked away with the 14-10 victory after a remarkable kickoff return late set up the Falcons for the win.

Huffman, now 5-0 overall and 1-0 in District 10-4A, Division I play, took an early 7-0 lead in the first half, taking an interception and a fourth-and-one conversion to set up a 10-yard touchdown run by Justin O'Neal.

Da'Marion Morris took some revenge for the Bears, snagging his second interception of the night to set up a great offensive possession that resulted in a 23-yard TD pass from Ashton Landry to Keaton Rives for a 7-7 tie.

LC-M, still looking for its first win of the year at 0-4 overall and 0-1 in district, kept their second-half momentum going with a 64-yard drive that put them at the Falcons' 25-yard-line. Justin Raney booted the field goal and the Bears owned a 10-7 lead with just just over eight minutes left in the game.

The celebration was short-lived for the Bears when Huffman returned the ensuing kickoff 60 yards. Four plays later, Huffman QB Luke Thomas crossed from five yards out to ensure the win.

Landry completed 7 of 15 passes for 75 yards, adding 100 yards on 20 carries for the Bears. HIs favorite aerial targets were Brendon Pollock with four catches for 31 yards and Nicholas Granger with two for 21 yards.

The Bears are back in action this Friday with a district showdown against VIdor at Pirates Stadium. The Pirates are 2-2 overall and 0-1 in league play after falling 21-14 to SPlendora this past week.

It took a sly kickoff return and two fourth-and-one conversions but the Orangefield Bobcats got the job done in a 14-6 district win over Liberty this past week.

The Bobcats got their scoring started after recovering a Liberty fumble to set up a 17-play, 81-yard drive that was capped by a 28-yard TD pass from Gunner Jones to Mason Sampson for a 7-0 lead.

The Panthers got a fumble of their own, converting that Orangefield turnover into points just two plays after that turnover to pull to within 7-6 after a missed PAT attempt.

The Bobcats answered with some tricky kickoff magic as Tyler Washington took the reverse all the way to the Liberty 24 yard line.

It took two fourth-and-one conversions to get the Cats into the end zone, including the final play that went one yard when Jones took the keeper for the 14-6 lead before the halftime break.

Neither team would get close to the end zone in the second half with the exception of Liberty driving to the Bobcats 35 yard line late in the game. Tyler Shearin ensured the victory when he hauled in an interception for the Bobcats to end the threat.

Ashworth led the Bobcats with 80 yards on 19 carries, while Liberty's Kaden Nolan threw for 86 yards to lead the Panthers.

In spite of leading early, Bridge City was unable to hold on as Hardin-Jefferson clinched a district victory with a touchdown with under a minute to go for a 35-34 decision.

At one point, the Cardinals were up 10-0 and led 20-7 at the halftime break but the Hawks kept pecking back at BC, closing to gap to 34-28 with about two minutes to go, then tying the game with 25 seconds at 34-34. The extra-point kick was the difference as the Hawks escaped with their second district win of the year. 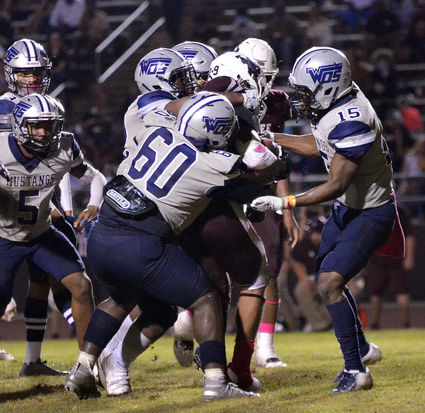 For Bridge City, it was the Ethan Oceguera show as he scored three passing touchdowns, going 8 of 19 for 151 yards in the air with one interception. He added 119 yards on 10 carries while J.S. Bearson led all rushers with 141 yards on 23 carries and a score for the Cards.

Austin Richardson was the top Bridge City receiver with two catches for 85 yards while J.T. Fielder added 51 yards on five catches for the Cards.

Junior Harrison Gauthier dominated on defense, collecting five solo and six assisted tackles, while Richardson and Trey Hebert each had eight total stops for the Cardinals. Isai Cantu got through the line to record a sack for the Cards while Deegan King, Richardson and Gavin Garrett each had an interception for BC.  Senior Cody Howard caused and recovered a fumble for BC.