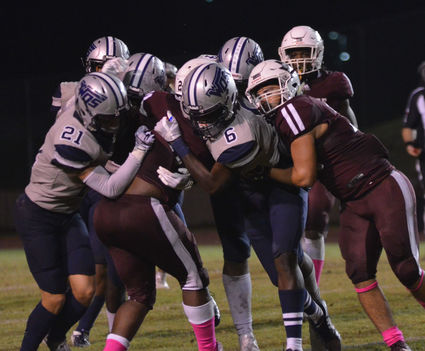 The Mustang defense held Silsbee to 139 total yards, 41 coming on just one play, in the Mustangs win over the Tigers, 36-6.

WEST ORANGE-STARK over ORANGEFIELD-Both local teams are coming off impressive wins last week as the Mustangs surprised Silsbee 36-6 while the Bobcats upset Liberty 14-6. The 'Stangs had better be ready to stop a grueling ground attack while Orangefield had better be ready for anything.

SILSBEE over BRIDGE CITY-The Cards are facing their third straight team that has been softened up by the Mustangs the week before. But the Tigers are mad and should take out their wrath on the Redbirds.

VIDOR over LITTLE CYPRESS-MAURICEVILLE-Both of these Orange County rivals are coming off hard-luck losses last week. Huffman, trailing 10-7. scored a touchdown in the final minute of their game to down the Battlin' Bears 14-10 while the Pirates were overtaken by Splendora 21-14. The homefield may be the only advantage Vidor boasts.

DEWEYVILLE over SABINE PASS-This is the Pirates' homecoming and they should please the exes with a big win Friday night.