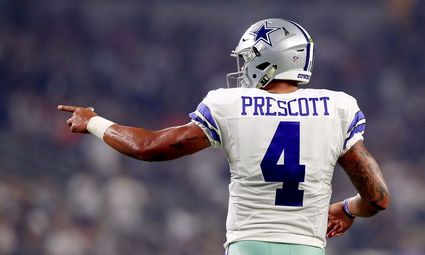 The Dallas Cowboys were in a scoring dogfight Sunday afternoon with the winless New York Giants in a game where the loser would pretty much be out of the post-season playoff picture. Dallas had posted only one win-a "miraculous" comeback against Atlanta that should have been a loss which would have made Sunday's meeting a battle of two winless teams.

Cowboys quarterback Dak Prescott was looking for an open receiver mid-way in the third quarter and when he couldn't find one, pulled the ball down and took off and got that important first down.

But when he was taken down by Giants veteran defensive back Logan Ryan, Dak's ankle snapped and he was writhing in pain as TV images showed his right foot bent at an awkward angle away from his leg.

The team said that Prescott had a compound ankle fracture and also dislocation of the ankle which was successfully repaired with surgery Sunday night. The young quarterback reportedly left the hospital on Monday and will be recovering for the next four to six months.

The game was tied at 34-34 as the Cowboys moved meticulously downfield behind veteran backup quarterback Andy Dalton, who was let go by Cincinnati after they drafted LSU Heisman Trophy winning quarterback Joe Burrow and picked up by the Cowboys.

Prescott was drafted in 2016 by Dallas in the fourth round--the same draft where the Cowboys made running back Ezekiel Elliott the fourth pick of the first round-to back up starting quarterback Tony Romo, who had become the highest paid Cowboys player ever in 2013.

But when Romo went down with a back injury in the preseason, Head Coach Jason Garrett elected to go with his rookie Prescott, who led the team to a franchise-best 11-game winning streak.

After Romo was healthy, Garrett kept Dak as his starting quarterback, who went on to start every game in his career--69 straight including Sunday's game and has guided his team to victory in 42 times. Romo ended up in the TV broadcast booth where he is doing a heck of a job.

Only Seattle's Russell Wilson and Tampa Bay's Tom Brady have won more games since 2016, according to ESPN's First Take program Monday morning. Dak has had 10 games with a 90-plus quarterback rating since 2016, the most in the NFL and also is the only player in NFL history with 425-plus passing yards in three straight games.

Dak was on pace for a career season, already completing 151 of 222 passes (68%) for 1,856 yards, nine touchdowns and four interceptions so far this season.

One of the Monday morning armchair quarterbacks pointed out that Dak is playing under a 2020 franchise tag worth $31.4 million after turning down a long-term contract reportedly worth $177 million, which is considerable much less than the contracts signed by Kansas City's Patrick Mahomes and Houston's Deshaun Watson.

He also predicted that Dak Prescott may never play another down for the Dallas Cowboys because idiot owner Jerry Jones may be gun-shy of signing a quarterback to a long-term deal after getting burned by the Tony Romo ordeal.

I believe that Dak will get his big contract-especially if the Cowboys have a sub-par season without making the playoffs-and picks up in 2021 with the Cowboys where he left off on Sunday!!!

KWICKIES...New York Yankees ace pitcher Gerrit Cole needs to spend some of those hundreds of millions the team paid him to buy the best television available so he can watch the Houston Astros-the team he didn't want to play for any more-- in the American League Championship Series against the team he couldn't beat-the Tampa Bay Rays-and maybe he'll pick up some valuable pointers for next season. He also should buy a comfortable chair, because he'll have a lot of baseball to watch from his penthouse suite.

I was saddened to hear Monday morning of the passing of former Houston Colt .45's and Astros star Joe Morgan, who died at the age of 77.

Dallas Cowboy's injured quarterback Dak Prescott also became the second quarterback in franchise history to catch a touchdown pass. He did it Sunday before fracturing his right ankle and ties the feat by Danny White back in 1985.

LSU became the first defending national championship team in nine years to fall out of the Associated Press' Top 25 College Football Poll after what many Tiger fans say was their "worst effort ever." And it was my wife Susan's alma mater-the Mizzou Tigers-who knocked them out, 45-41. The top three teams-Clemson, Alabama and Georgia-remain the same while Notre Dame moved up one notch to No. 4, Mack Brown's North Carolina jumped three places to No. 5. Idle Ohio State is still No. 6, Oklahoma State came up from tenth to No. 7, Cincinnati also jumped three spots to No. 8, idle Penn State is still No. 9 and Florida dropped from fourth to No. 10. The Texas Aggies catapulted ten places from No. 21 to No. 11 and SMU came up one to No. 17. Oklahoma and the Texas Longhorns are both out of the Top 25.

Former LSU coach Les Miles, who tested positive for COVID-19 earlier this month, will be back on the Kansas sidelines in Saturday's game at West Virginia.

The Los Angeles Lakers defeated the Miami Heat 106-93 in Game 6 Sunday to become the NBA champions, led by LeBron James, who has been on championship teams with three different franchises.

The Houston Texans finally got into the winning column Sunday with a convincing 30-14 victory over the Jacksonville Jaguars, who also have only one win so far in 2020. After receiving grades of "F" in the first four games from the Houston Chronicle, the paper gave them a "B" overall under interim coach Romeo Crennel, who was named last week after Bill O'Brien was fired.

JUST BETWEEN US...The Houston Astros again surprised the baseball world by winning last week's best of five ALDS over the heavily favored Oakland A's in four games. They played favored Tampa Bay Sunday in Game One of the ALCS and lost 2-1 in a game which featured light hitting and great pitching. Houston got its only run on a first-inning home run by Jose Altuve while the Rays countered with a round-tripper by Randy Arozarena. Framber Valdez pitched well but was tagged with the loss. The Astros dropped Monday afternoon's Game 2 by a 4-2 count. Second baseman Jose Altuve made two throwing errors, the second coming with two outs, followed by a three-run homer. Houston left more than 20 runners on base in the two losses, thanks to their inability to hit with runners in scoring position, although they smacked more than a combined 20 base hits, scoring two of their runs on homers (Altuve and Carlos Correa) and the other on a bases-loaded double play.