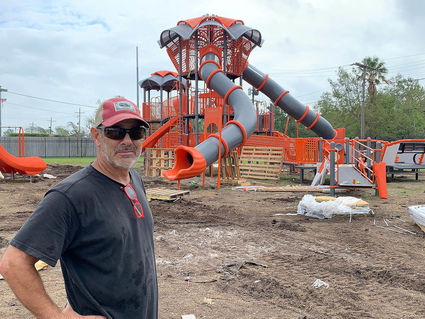 Much assembly is required for the City of Orange's new playground at Lions Den Park and much has been assembled over the past couple of weeks.

But slow your roll.

"The estimate was it was going to be 60 to 90 days before everything is 100 percent complete," James Lawrence, city parks director, said.

"We're just getting into our third week.

"They are moving fairly quick, but you should expect it to slow down as they get into more details toward the end."

The city is spending just a tad under a half-million dollars to put up a new playground to replace a wooden structure that was declared unsafe in February and torn down in June.

The targeted opening of the new playground is set for the start of 2021, Lawrence reminded. However, the current COVID-19 pandemic will have a say in the future.

"I'm sure we'll have a big grand opening," Lawrence said. "I'm just not sure when."

The new playground cost $489,000 and is being installed under a contract with May Recreation Equipment and Design of Houston.

Much of the bigger parts of the orange-and-gray playground equipment has been erected, but foundation work remains.

"The next step is to come in and start pouring concrete footings and cement pathways that lead to every piece of equipment," Lawrence said. "That will be topped by a rubber sidewalk."

The rubber walkways will make the equipment accessible to wheelchairs. The playground includes several ADA features, including a swing set, a Miracle Megatower play structure and a Miracle Kids' Choice custom play structure with ADA Avalanche Slide and a Rocks and Ropes Inca Net.

A Playhouse, Silly Tree and Sensory Garden Wall are other features. A swing will include seat belts, and four built-in shades, the largest 20 feet by 20 feet.

Ten concrete footings will support the shade structures and climbers. The layout will include 2,000 square feet of No Fault rubber surfacing covering a 652 linear foot shoulder to support wheelchairs.

"They're going to start pouring concrete next week and it will depend upon the weather how long it takes," Lawrence said. 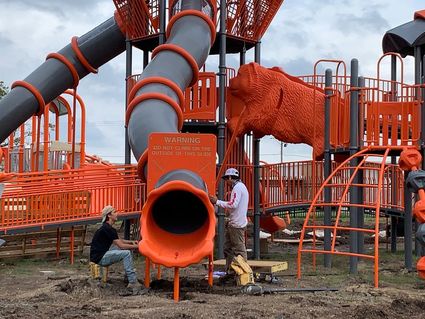 "Most of the main structures are up, but there are still a lot of features to go in. Some pieces are coming out of California and haven't arrived yet."

The final piece will be the installation of a lion statue carved out of stone that will be placed near the entrance.

The Orange Lions Club was one of the most actively involved of several local organizations and industries when it came to constructing the original playground at Lions Den Park, back in 1999.

The old wooden playground was built under the direction of the playground designers by hundreds of volunteers from the community with materials and labor donated by local plants.

"We're looking at somewhere around Christmas time for it to be open and ready for the public," Lawrence said.

"But nowadays, with COVID, who knows?"