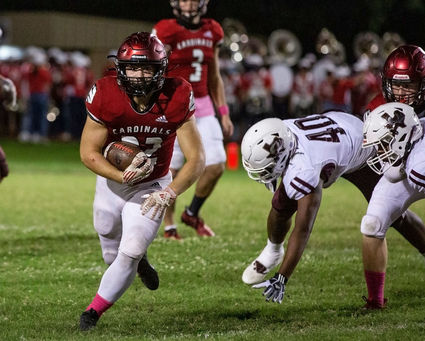 It was a tough week for most of our Orange County high school football teams with three of four falling to defeat during Week 8 of this crazy 2020 season.

West Orange-Stark clinched a spot in the playoffs with its 51-7 win over Orangefield in District 11-4A, Division II play, while the Cardinals of Bridge City fell hard to Silsbee 51-21 in league play. Little Cypress-Mauriceville is looking for its first win of the season after losing to Huffman-Hargrave in a close 14-10 District 10-4A, Division I matchup.

This week, the Bears host league foe Lumberton with one of the two earning their first district win of the year by night's end.

In Week 5 of 11-4A, D-II play, Bridge City will travel to Orangefield, while West Orange-Stark treks over to Liberty this Friday night.

West Orange-Stark has already clinched a spot in the postseason after rolling past Orangefield this past Friday night in a 51-7 decision. The Mustangs will face Liberty this Friday with the 3-3 Panthers still looking for their first district win in four tries.

Bridge City and Orangefield, both 1-2, will try to edge up on Silsbee and Hardin-Jefferson in the district standings. Both the Tigers and Hawks are 3-1 and looking for a postseason berth as the regular season moves into Week 9.

Jerren Terrell is the no-doubt passing leader in the district, passing the 1,000-yard mark this past week after completing 15 of 21 passes for 267 yards and two touchdowns against Orangefield. So far this season he has 1,031 yards, completing 55 of 105 passes with 12 touchdowns ... in just five games!

Hamshire-Fannett's D'onte Zeno is the closest to Terrell, hitting 59 of 97 passes for 921 yards and six touchdowns, though he has eight interceptions compared to Terrell's zero picks this season.

Mustang Jalen Thompson is the main beneficiary of Terrell's aerial escapades, grabbing 15 passes for 365 yards and seven TDs to lead the district in receiving.

Bridge City's Ethan Oceguera is ranked third in the district with 632 yards passing on 43 completions thanks in great part to one of the league's top receivers, Cardinals teammate J.T. Fielder. Fielder has 17 catches this season for a total of 173 yards and a TD.

Orangefield's Tyler Washington still leads the district with four interceptions while Silsbee's Kevin Martin is right behind him with three picks.

West Orange-Stark's Angel Ibarra is still by far the highest scoring kicker in the district with 30 extra-point kicks and five field goals for a total of 45 points scored.

The Mustangs amassed 456 yards of total offense while its defense allowed just 155 yards and eight first downs to the Bobcats in a 51-7 district decision this past Friday night.

The Mustangs got off to a slow start after fumbling the opening kickoff. The Bobcats were unable to convert, though, eventually turning the ball over on downs. WO-S responded with a 10-play, 64-yard drive that was capped by a one-yard run by quarterback Jarren Terrell. Even the sure-footed Angel Ibarra got off to a rough start, missing the extra point kick to leave the Mustangs up 6-0 with 6:08 left in the first quarter.

While the first quarter was slow, the Mustangs broke out and blew open a 34-0 lead by the end of the first half, scoring 28 points in the second quarter.

The Mustangs with 62 yards in just five plays with Jailen Brown running 15 yards to paydirt. With Ibarra's PAT kick good, the Mustangs went up 13-0.

The WO-S defense dominated the Bobcats through the rest of the second quarter, forcing punt-punt-interception on the next three Orangefield possessions.

Terrell completed a 21-yard pass to Braden Gant, capping a 6-play, 51-yard drive, then Terrell kept it himself for a 10-yard TD run and a 27-0 advantage.

Mustang Jadon Jones picked off a Gunner Jones pass, returning it to the WO-S 37-yard line. Four plays, Terrell hit Thompson from the 16-yard line for a 34-0 halftime lead.

It looked as though the Bobcats had found some special motivation in the locker room during the break, coming out and driving against the Mustangs defense in the third quarter.

Just as quickly, though, that momentum was stopped cold when Tyrone Brown picked up an Orangefield fumble, rumbling 40 yards to the end zone for a Mustangs 41-0 advantage.

After forcing an Orangefield punt on the Bobcats' next possession, the Mustangs capitalized again with five-play, 86-yard drive that ended with Jayson Zeigler Jr. standing in the end zone after a 16-yard run.

The Bobcats finally found the end zone late in the third quarter when Jones completed a TD pass to Dwight Davis for 13 yards and the score. Ashworth picked up 32 yards on a big run midway through the 69-yard, 6-play drive as the Bobcats pulled to within 48-7 with the score.

The Mustangs finished their scoring with an Ibarra field goal as he booted a huge 47-yarder to make the score 51-7.

Terrell completed 15 of 21 passing attempts for 267 yards and two touchdowns, while Jacob Domingue hauled in 88 yards on three catches. Thompson finished with four catches for 64 yards.

Elijah Gales ran the ball three times for 66 yards, while Jamaal Shaw added 60 yards on 10 carries for the Mustangs.

Ashworth led the Orangefield offense with 75 yards on 20 carries.

It was a home game for the Cardinals that had postseason implications on the line.

Now it's a home game the Cards wished they had another chance to win.

After falling behind 17-0 to the Silsbee Tigers, the Cardinals couldn't catch up as the Tigers finished with a 51-21 district victory at Ward Stadium in Bridge City this past Friday night.

That scored moved to 17-0 when the Tigers scored on a two-yard run by Malik Jones at the start of the second quarter.

That's when the Cardinals buckled down, finally moving the ball with quarterback Ethan Oceguera pushing across the goal line from seven yards out for the 27-7 difference on the scoreboard.

A strong stand by the Cardinals' defense gave the ball back to the BC offense only to be forced to punt. A bad snap gave the Tigers the ball at the Bridge City 8-yard line. Arline added another touchdown to his statistics on an 8-yard run, giving the Tigers a 24-7 lead at the halftime break.

A great kickoff return for the Tigers to open the second half set up Silsbee at the Bridge City 29. A few plays later, the Tigers were in the end zone again as Arline ran for his third TD of the game and a 31-7 Silsbee lead.

The Cardinals kept the pressure on the Tigers, though, as they worked the ball to the goal line, with JS Bearden pushing across from the one to cut the lead to 31-14.

Just when it looked like the Cardinals would make a game of it, the Tigers scored again, this one with Malik Jones crossing from the four. Jones intercepted the ball on the Cardinals' next offensive possession, resulting in a 37-yard field goal and a 41-14 lead for the Tigers. Another field goal followed a three-and-out by the Cardinals, giving the Tigers a 44-14 advantage.

The Cardinals refused to yield, though, with Oceguera finding Kyler Garlaska for a 71-yard pass touchdown, cutting the Silsbee lead to 44-21.

The Tigers put the punctuation mark on the win, though, when Raymond Baltrip took a kickoff 90 yards for Silsbee's final score of the game. 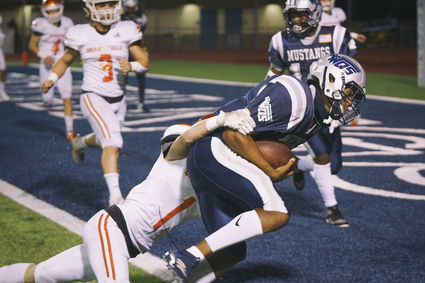 WOS quarterback Jerren Terrell reaches across the end zone for the first touchdown of the 51-7 win over Orangefield. Terrell finished the game with two rushing touchdowns and two passing ones.

Oceguera completed 12 of 30 passes for 215 yards to lead the Bridge City offense. The Tigers' Arline finished with 204 yards on 24 carries.

Little Cypress-Mauriceville is still searching for its first win of the 2020 season after falling 32-7 to Vidor at the Pirates' homecoming game this past Friday night.

With the Pirates up 14-0 heading toward the halftime break, the Bears put together a tedious 21-play, 75-yard drive that ended with a 3-yard run by Ashton Landry to cut the Vidor lead to one score at 14-7.

The Pirates extended their lead again when they scored off the opening possession of the second half then cross the goal line again twice more in the fourth quarter.