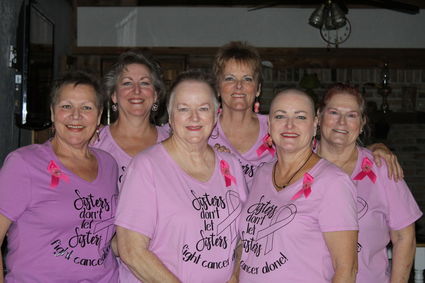 The slogan "sisters don't let sisters go through cancer alone" took on a new meaning for seven Schexnider sisters from Bridge City, Texas. The catchphrase became more relevant two weeks ago when the youngest of the sisters, Trudy Schexnider Spaeth of Minnesota, became the second sister this year to be diagnosed with breast cancer. In February of 2020 the oldest sister, Charlotte Chiasson, was diagnosed with stage 2 breast cancer. Her cancer was caught early through a routine mammogram and a mastectomy followed with no chemotherapy and no radiation. "I can't emphasize enough how important a yearly mammogram is", commented Charlotte. "I have one every year and there was nothing wrong the year before. Please get a mammogram".

Just two weeks ago the sisters found out their youngest sibling was also diagnosed with breast cancer, stage 3. Trudy, who has lived in Minnesota for about 20 years has begun chemotherapy. The sisters are tight knit and wanted to show support since she lives so far away. Two of the sisters, Charlotte Chiasson, cancer survivor and Cil Dixon shaved their hair as show of support. "I feel badly that I didn't lose my hair since I didn't have chemo", commented Charlotte. "This is the least I can do as support for my sister." Plans are in the works to trade off going to Minnesota to assist during treatment followed by surgery. "We hope our message is loud and clear", commented Cil. "We never dreamed it would happen twice in one year to our family. A support group is so important to anyone who is ill. I thought shaving my head was an easy outward sign of support of my sister. "