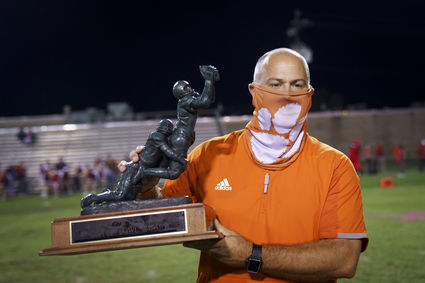 It was a great night for most of Orange County's high school football teams with West Orange-Stark, Orangefield and Little Cypress-Mauriceville each picking up district victories this past Friday night.

The Mustangs remain unbeaten at 6-0 overall and 5-0 in District 11-4A, Division II play, while Orangefield edged closer to the postseason berth at 3-3 overall and 2-2 in district.

West Orange-Stark gets the week off this Friday while Orangefield travels to Hamshire-Fannett for another district showdown. Bridge City, which lost this past Friday to Orangefield, will host Liberty on Friday.

LC-M picked up its first win of the year to move to 1-5 overall and 1-2 in District 10-4A, Division I competition. The Bears will travel to Livingston this Friday. The Lions are tied for first place with Huffman Hargrave at 3-0 in district play.

Well, you can bet that West Orange-Stark will not win this Friday night.

It's because the Mustangs are not playing.

As the dominating Mustangs get their bye week this Friday, the rest of the district will try to do some catching up.

Liberty, at 0-4 in district play, will face the 1-3 Bridge City Cardinals this week, while a charging Orangefield travels to play the winless Hamshire-Fannett Longhorns. Silsbee travels to Sour Lake to take on Hardin-Jefferson in the other 11-4A, D-II game this Friday.

Mustang quarterback Jerren Terrell still leads all passers in the district with 1,045 yards, completing 59 of 115 passes with 12 touchdowns and three interceptions this season. His closest competitor with two weeks to go in the season is H-F's D'onte Zeno with 965 yards on 64 completions with six TDs and 12 INTs.

Orangefield's Hunter Ashworth is among the premiere rushers in the district, sitting at third place with 501 yards on 104 carries with four TDs. Jaiden Porter of H-J is the top runner in the league with 578 yards on 83 carries.

Thanks to his quarterback's proficiency, Mustang Jalen Thompson leads all pass receivers with 370 yards and seven touchdowns on 16 catches. H-F's Colin Dorsey is second with 17 catches for 282 yards.

If you're looking to do so passing against Orangefield this season, you might want to reconsider. The Bobcats own the top two pass-pickers in the league in Tyler Washington and Tyler Shearin, each with four interceptions.

In what should have been another walk through the park for West Oranges-Stark, the Liberty Panthers pushed the Mustangs to the brink before falling 27-7 in District 11-4A, Division II play this past Friday night in Liberty.

For the first time this season, the Mustangs fell behind their opponent early in spite of taking a quick 6-0 lead in the first quarter.

Jamaal Shaw finished a three play, 40-yard drive with a 35-yard run for the score. The extra point was blocked, leaving the Mustangs up 6-0 with 5:33 left in the first quarter.

The Panthers, who continue to look for their first district win of the season at 0-4, responded with a touchdown in the second quarter for a 7-6 lead over the stunned Mustangs.

Liberty worked its way down the field, burning off nearly five minutes of the second quarter, marching 57 yards in eight plays. Austin Walker crossed the goal line from the 1 and the PAT kick was good for the early Panthers lead.

With just seconds remaining in the first half, the Mustangs' Artavious Samuel took the kickoff 86 yards to the end zone and the Mustangs were up for good 13-7 heading to the locker room.

It took most of the third quarter for WO-S to find the end zone again with defensive back Jasachin Harris intercepting a Liberty pass at the 26, returning it to the 18-yard line. One play later, Jubar Ross went the distance for the score and a 20-7 lead.

On its final offensive possession of the game, the Mustangs marched 48 yards in six plays, putting the final points on the board with 3:44 left when Jayson Zeigler Jr. cross from a yard out for the 27-7 final.

The Mustangs did nearly all their damage on the ground, amassing 198 yards on 33 carries, led by Zeigler's nine carries for 66 yards. Elijah Hales was right behind him with 62 yards on 14 carries, while Jamaal Shaw added 55 yards on four carries.

The Panthers managed just 121 yards in the game with Terrick Peterson collecting 48 yards on 15 carries and Kadon Nolan completing 6 of 14 attempts for 49 yards passing.

The Orangefield Bobcats kept their postseason hopes alive with a 22-0 shutout win over District 11-4A, Division II foe Bridge City this past Friday night at F.L. McLain Stadium.

The Bobcats are now even across the board with a 3-3 overall record and 2-2 mark in league play, while Bridge City falls to 1-4 and 1-3 with the loss.

The Bobcats got the scoring going in the first quarter when Cameron Dischler was able to break free for a 29-yard TD run, following up on a big 50-yard punt return by teammate Dwight Davis. The PAT kick was blocked, leaving Orangefield up 6-0.

In the second quarter, Gunner Jones booted a 26-yard field goal for a 9-0 lead, capitalizing on an interception by Tyler Shearin.

Still looking for the finishing touches, the Bobcats found it in a nine-play, 75-yard drive that was capped by Dischler's 4-yard run for a 15-0 advantage for Orangefield.

Shearin picked off his second interception later in the second half, ending Bridge City's only real offensive threat in the game.

With Hunter Ashworth leading the way on the final drive for the Bobcats, Jones put the icing on the cake on a 27-yard run for the 22-0 final.

Dischler led all rushers with 92 yards on 11 carries, while Ashworth added 63 on 15 carries. J.S. Bearden led the Bridge City offensive effort with 69 yards on 16 carries.

It was bound to eventually happen.

The Little Cypress-Mauriceville, filled with a desire to win and the talent to get it done, finally put everything together to claim its first win of the season in a 14-13 district decision over Lumberton this past Friday night.

It was anything but a sure thing, though, as the Bears battled to a final defensive stand in a two-point conversion that fell short by Lumberton.

The Bears led the game 14-7 when Lumberton picked off an errant LC-M pass to give new life to the Raiders. Several plays later, the Raiders crossed the goal line to pull to within 14-13 with eight seconds left in the game.

Opting to go for the win instead of the tie, Lumberton's offense attempted the two-point conversion but the running back lost his footing and went down with the ball and the loss. 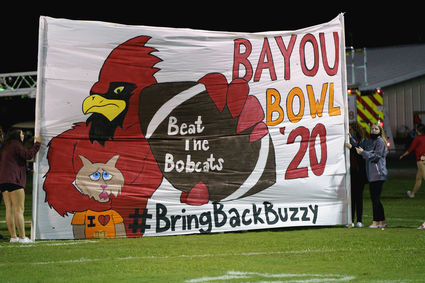 The Bears, now 1-5 overall and 1-2 in league play, trailed 7-0 heading into the fourth quarter but managed a comeback that would eventually ensure the win.

With just under nine minutes to play and trailing by a TD, LC-M's Ashton Landry hit Brendon Pollock from the eight-yard line to tie the game at 7-7.

The Bears' second TD came after a 43-yard pass-and-catch between Landry and Pollock, setting up the ball at the Lumberton 1-yard line. A play later, with 5:28 left in the game, Landry crossed from the 1 for the 14-7 advantage.

Landry completed 17 of 26 for 154 yards, adding 47 yards on the ground on 11 carries. Pollock was his favorite aerial target with eight catches for 108 yards.