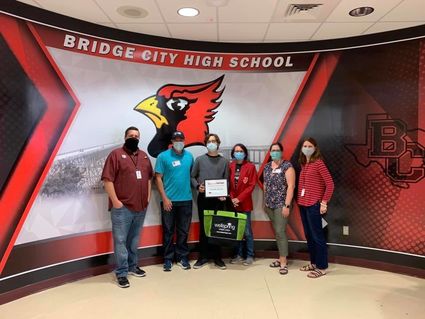 The Bridge City Chamber of Commerce has announced that the October student of the month for Bridge City High School is Chandler Brooks. Chandler was presented his certificate by Ambassador, Elyse Thibodeaux of Tiger Rock Martial Arts of Bridge City. Chandler is the Son of Mr. And Mrs. Jeff and Elizabeth Brooks. He is ranked 3rd of 195th and has a GPA of 4.74.

Chandler's awards and honors include:

Chandler's clubs and organizations include:

William Poppe, Assistant Band Director, said, "Chandler is not only an incredibly intelligent student, but is also a model human being. One of the qualities that I admire most about Chandler is his attention to detail in every aspect of his life. He is always prepared at a high level for everything he has on his plate. Chandler is the kind of person that takes it on himself to help others without needing to be asked and has spent plenty of extra time both after school and on weekends in the band hall helping to get instruments, setups, and music ready. Most importantly, Chandler is the type of person that is respected by everyone he encounters, and without a doubt will be successful at anything he chooses to do in his life."

Cathy Riley, English Department, Director of Bridge City Strutters, said, "CHANDLER BROOKS exudes passion for learning. Determined and driven, CHANDLER'S genteel demeanor and strong work ethics are stellar among male students, and he always puts others before himself- a true example of leadership. He leads in the classroom, the band hall, and UIL math and science teams. In fact, CHANDLER attributes his passions for life to his quest for mathematics and science, his love for music, and his enjoyment of running. He wrote in one of his essays in English IV AP, "I could sing sweet songs of passion or odes to bygone times while my guitar strings hum back and forth, oscillating endlessly. Perhaps I could engage in

music in a different form, my fingers dancing across black and white keys with graceful and gentle strokes, or I could create a riff with the bass.. I could compose verses both sweet and sinful, equally important to the sights and sounds of the universe... As the endorphins move deeper into the depths and cervices of my flawed mind, my feet match the marching cadence of the endorphins, my own body acts as an avatar for the war in the mind... I could continue to enlighten myself by studying the sciences and mathematics as the Greeks did before me... Absolutely unmatched remains the human struggle, completely defined by our ineptitude and inability, yet perhaps therein lies humanity's charm... The freedom and flexibility of music, running, and STEM not only define me but allow me to define myself."

pursues. HUZZAH, BROOKS Chandler's future plans are to study engineering at either Texas A&M University or the University of Texas.