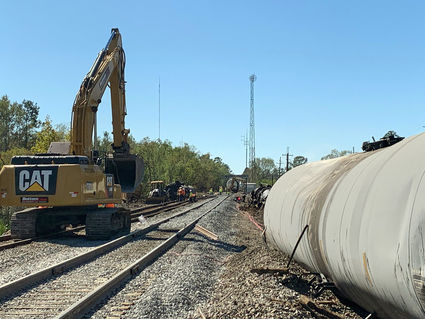 A derailed tank car, right, awaits removal Monday afternoon while railroad workers clean up after last Thursday's Kansas City Southern Railroad train derailment next to Old Highway 62 that resulted in schools and road closures and evacuation for about 600 Mauriceville residents.

While confirming Tuesday that the last of the displaced Mauriceville residents have been allowed to go home, County Judge John Gothia admitted he learned about Orange County's latest brush with infamy in an usual way.

"The first call I got about it Thursday morning was from USA Today," Gothia said. "He said, 'We're looking at a video posted on the internet, and we want to know when did it happen?'

"I hung up the phone and called Joel [Ardoin, Orange County's emergency management coordinator] and he was just getting the call."

The 7:30 a.m. Oct. 29 derailment of 25 Kansas City Southern Railway Company cars on the company's main line at Farm to Market Road 1130 near its intersection with Old Highway 62 was videoed as it happened by Morgan LeBlanc and immediately went viral.

The derailment caused the closure of the Mauriceville Elementary and Middle Schools for three school days and immediate closure of roads and evacuation of businesses, schools and residents within a mile radius out of concerns about the contents of the wrecked cars.

The cause of the derailment remains under investigation.

It's the third big local upset, including Hurricanes Laura and Delta, in two months. And those came on top of the worldwide COVID-19 pandemic and nationwide protest marches.

From the start, Orange County Emergency Services District 4 under Chief Matt Manshack, was in control of the scene.

Ten of the 25 derailed cars were empty, with 15 loaded.

Six of the tank cars derailed were leaking, but only two of those carried product deemed to be a risk to the general public. They contained monoethanolamine, a corrosive chemical used as a feedstock in the production of detergents, pharmaceuticals, corrosion inhibitors and polishes.

The leaks were contained and the product was containerized for proper disposal.

Additionally, two cars carrying ethylene oxide, a colorless, highly flammable liquid, derailed but did not rupture though the tanks were separated from their wheels and undercarriages in the crash.

The schools were not allowed to reopen and those living closest to the accident could not return until Monday, after the chemicals were removed from the area.

Four other derailed tank cars were breached and leaked a petroleum product determined not to be a risk to humans.

A number of utility poles were knocked over as the cars tumbled into one another and into the bar ditches. No one was hurt, but 2,400 Mauriceville residents lost power and about 600 had to evacuate initially.

Cleanup continues. Monday, after the rail cars carrying the ethylene oxide were removed, railroad workers were replacing rails and cleaning up the track. Meanwhile, decontamination and testing of the area continues.

"The two ethylene oxide cars that posed the biggest risk were removed from the site and taken to a location outside Orange County," Gothia said Tuesday evening.

"They're still getting the rest of the cars out of the ditch and decontaminated to take to a salvage yard. Every single car that leaves that area has to be decontaminated before they're moved -- all those cars that have been laying in that mud that's contaminated.

"Then they can do environmental work on the dirt that was contaminated." 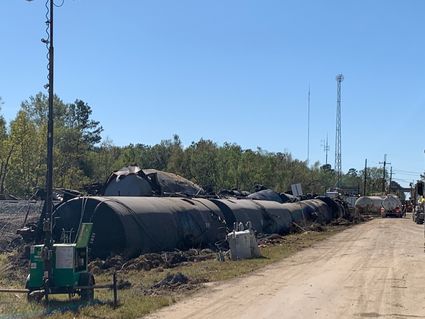 By the end of Thursday, the derailment area was teeming with an alphabet soup of government agencies.

"We had the EPA, TECQ, ESD, OCSO, DPS, KCS and HAZ-Mat people out there," Gothia said. "I didn't even know there was a Railroad Police, but they were out there.

The Federal Railroad Administration (FRA) is leading the investigation into the accident.

According to an internet search, there were 11,434 rail accidents and incidents reported in the US in 2019.

Gothia said the last derailment he recalled in Orange County was in Vidor in 2016. Seven rail cars derailed at the KCS crossing on South Main Street and five of them overturned, spilling corn. No one was injured.